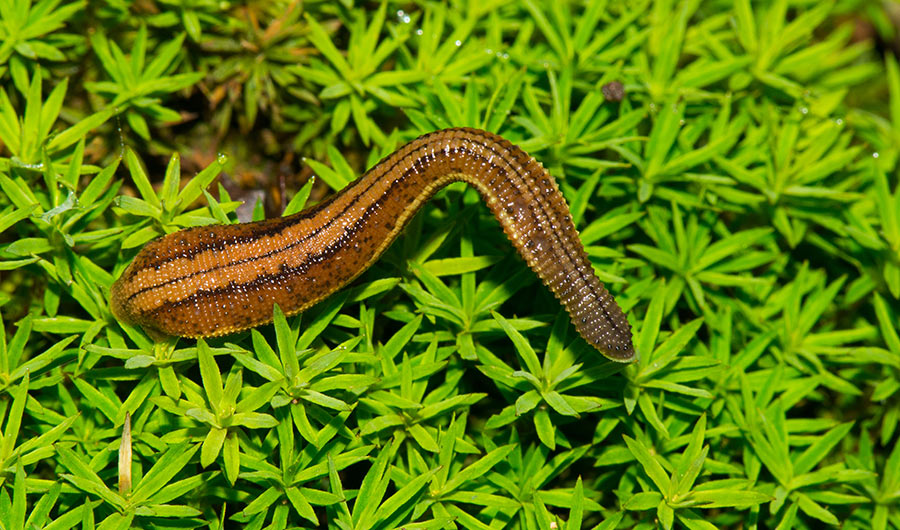 (Inside Science) -- You can't argue with 30,000 leeches. In the largest study of its kind, researchers used the blood-sucking worms to reveal a marvelous variety of mammals, birds and frogs in China's Ailaoshan Nature Reserve. The findings demonstrate the value of the park and help establish leeches as a conservation surveillance tool.

"From a conservation angle, the number of endangered, near-threatened [and] threatened things that they found with this was just awesome," said Michael Tessler, a biologist and leech expert at St. Francis College and the American Museum of Natural History in New York, who has collaborated with the research team in the past but was not involved in the new study. "That this method is capable of finding those things I think is very powerful, and I think they showed some really important patterns."

A paper describing the findings is available online, although it is not yet published in a peer-reviewed journal.

The researchers were inspired by the Convention on Biological Diversity's 2010 goal for countries to set aside at least 17% of land and inland water habitats as protected areas that are "ecologically representative" and "effectively and equitably managed" by the year 2020.

One of the hardest parts of meeting that target has been figuring out whether protected areas are achieving their biodiversity goals, said Christopher Baker, a molecular ecologist at the U.S. Army ERDC Cold Regions Research and Engineering Laboratory, who helped conduct the study while he was a postdoctoral fellow at Harvard University.

Researchers often estimate a park’s value in preserving biodiversity based on measures such as the amount of funding or the number of staff members it has, or the levels of human disturbance within its boundaries. But those metrics can't really show what effect conservation efforts or human disturbance are having on wildlife and ecosystems.

"If what you actually are interested in is animals wandering around in the park, you're kind of taking a bit of a leap of faith that hectares of forest or numbers of park rangers actually correlate with the thing that you care about," said Baker.

Past studies have shown that it's possible to identify what a leech last ate by analyzing the DNA in its body. Of course, most of that DNA belongs to the leech itself, but researchers get around that problem by looking for DNA sequences present only in vertebrates.

But until now, the method had only been tried on small scales. The new study demonstrates that it can give a big-picture view of vertebrate diversity across an entire park -- specifically, Ailaoshan Nature Reserve, which stretches for nearly 80 miles along a mountain ridge in Southern China, covering an area roughly the size of Singapore.

Like many parts of Southeast Asia, Ailaoshan reserve is home to a group of land-dwelling leeches in the genus Haemadipsa. A hungry Haemadipsa leech is generally thinner than a pencil, "but what they lack in size compared to some of the other leeches, they make up for in abundance in certain areas," said Tessler. "In the monsoon season … the ground can kind of can move toward you."

The reserve is divided into 172 sections that are regularly patrolled by rangers from surrounding villages. The researchers enlisted these rangers as leech collectors, receiving a total of 30,468 leeches over 3 months.

When the team extracted and analyzed the DNA from the leeches' bodies, they were able to identify 86 vertebrate species. Nine of those species are listed as vulnerable or endangered, including the Asiatic black bear, the stump-tailed macaque, a large goat-like creature called the mainland serow, and several types of frogs.

In the lowland areas around the edges of the reserve, many leeches had been feeding on domestic animals such as cows and goats. This wasn't surprising, since humans often bring livestock into the park to graze. But the new study revealed that wildlife followed the opposite pattern, with most species concentrated at higher elevations in the middle of the reserve.

Wildlife's preference for the most remote parts of the reserve suggests that human activity does indeed reduce biodiversity near the periphery. It's not clear whether livestock are the problem, or whether something else is driving wild animals to the middle of the park, noted Douglas Yu, an ecologist at the Kunming Institute of Zoology in China and one of the leaders of the project. There are many types of disturbance that could affect wildlife; for example, camera traps have captured images of hunters in the reserve with illegal homemade rifles, their faces concealed by balaclavas.

The measure of success

The new study "exemplifies what could be a strategy for long-term monitoring of biodiversity," said Sébastien Calvignac-Spencer, a disease ecologist at the Robert Koch Institute in Germany, who has collaborated with some of the researchers in the past but was not involved in this project. In future years, repeat leech surveys could reveal how biodiversity in the park changes over time, and how it responds to new conservation efforts or changes in policy, he said. "But even here, just with this one snapshot, they already have very nice and plausible ecological trends."

Of course, leeches aren't the only way to survey vertebrate diversity, nor would they be the best way in all situations. They were a good solution at Ailaoshan, both because of the abundance of land-dwelling leeches and because rangers were already patrolling the whole park. In other areas, camera traps or automatic audio recorders might make more sense, although those approaches require more expensive field equipment, said Baker.

There are also many other ways to collect DNA en masse from wild organisms -- a field collectively known as environmental DNA, or eDNA. Researchers often collect DNA from streams and other water sources, and two recent studies in zoos demonstrated that you can even extract and identify DNA from the air. And where leeches aren't available, there are usually other parasites and scavengers filling their bellies with samples. Blowflies are showing promise, as they feed on animal carcasses and feces and can be easily collected using rotten meat as bait.

All these methods have drawbacks, and researchers need multiple options to find feasible solutions in a wide range of situations. According to Calvignac-Spencer, the new study establishes leeches as another tool in the conservation biologist's toolbox.

"Progressively this toolbox is expanding," he said. "I think that we should be very open minded with that, and just try everything."