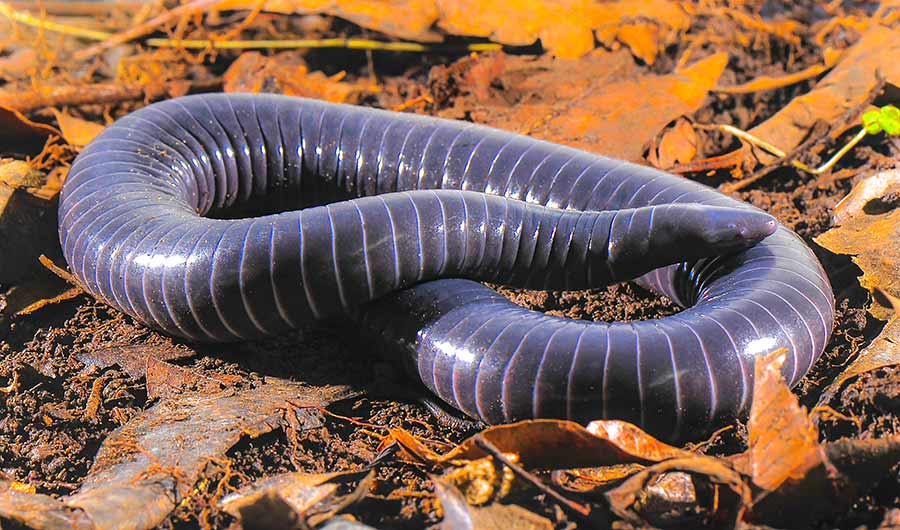 (Inside Science) -- Long before snakes evolved their famous venomous fangs, toxic bites may have arisen in an ancient group of worm-like amphibians called caecilians, a new study finds.

Caecilians are limbless, nearly blind amphibians that at first glance could easily get mistaken for snakes or worms. They are found in tropical sites in Africa, Asia and the Americas. With 214 known species, they make up less than 3% of all amphibians. Much remains unknown about them because they nearly all have burrowing lifestyles.

The researchers focused on ringed caecilians (Siphonops annulatus) from cacao plantations in Brazil. Previously, they found this species generates secretions from skin glands at both ends of its body. Its head produces a mucus-like lubricant that helps it quickly dive underground to escape predators, whereas its tail can secrete a toxin to deter pursuit.

While examining this amphibian's skin glands, study lead author Pedro Luiz Mailho-Fontana, an evolutionary biologist at the Butantan Institute in São Paulo, Brazil, discovered a set of glands around the lips with long ducts that open at the base of each spoon-shaped tooth. Chemical analysis of these dental glands found phospholipase A2, a common protein in the toxins of venomous animals such as bees and many kinds of reptiles.

If future work can verify these dental gland secretions are toxic, it may mean caecilians are the oldest land-dwelling vertebrates with venomous bites. Snakes appeared roughly 100 million years ago, but caecilians are far older, originating roughly 250 million years ago. The researchers also found three other caecilian species they examined possessed dental glands, suggesting all caecilians might have them, said study senior author Carlos Jared, an evolutionary biologist and director of the Structural Biology Lab at the Butantan Institute.

Previously, scientists thought amphibians only passively defended themselves with poisons. For example, poison dart frogs secrete toxins from their skin, but do not actively deliver venom into victims. "No amphibian has previously been shown to have oral venom glands or a venomous bite," said study co-author Edmund Brodie, Jr., an evolutionary biologist at Utah State University in Logan.

These new findings suggest there might be a connection between serpentine bodies and venomous mouths. Such oral weapons may be needed when animals lack limbs with which to fight, said study co-author Marta Maria Antoniazzi, an evolutionary biologist at the Butantan Institute.

The scientists detailed their findings online July 3 in the journal iScience.