A solitary walker, Lord Voldemort, an erupting volcano and more are conjured from close-up pictures of materials.
Image 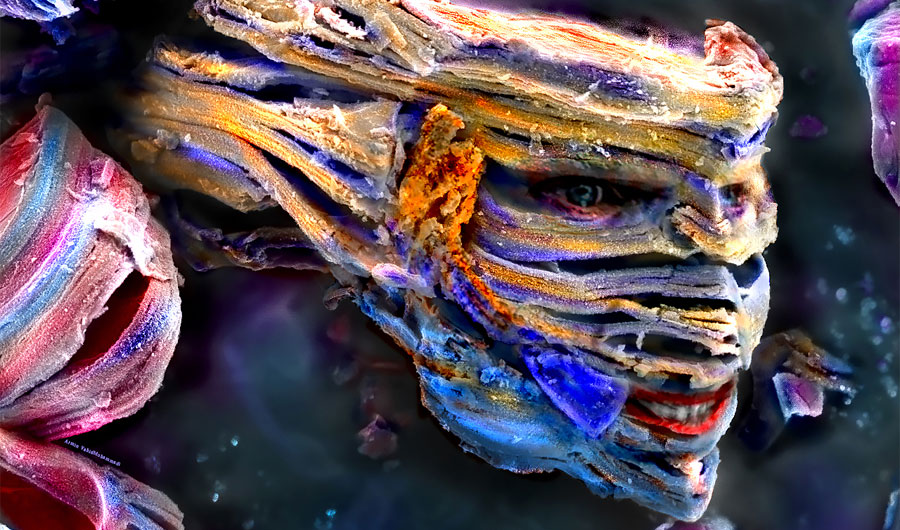 (Inside Science) -- Most materials scientists dread defects. But sometimes performance-limiting imperfections can be beautiful.

This past March, Daniele Foresti, a postdoctoral fellow in materials science and mechanical engineering at Harvard, spotted a "pretty epic picture" in the magnified image of a fracture running through some of the layers in a sample a student had made. Technically, the synthesis of the material had failed. But the defect looked like a little lost human, alone in a wide-open landscape.

Foresti saved the picture and earlier this month it won one of three first place recognitions in the Science as Art competition at the Materials Research Society's conference in Boston.

Each year the contest honors scientific images that "transcend their role as a medium for transmitting information and contain the aesthetic qualities that transform them into objects of beauty and art."

Other winners this year include a nano-sized Lord Voldemort, walls of water repelled from a superhydrophobic coating, the dance of a ferrofluid in a magnetic field, a branch of lithium metal growing in a battery, and a speck of dust in a solar cell that resembles an erupting volcano.

Check out all the winning images below and learn more about the science behind the shots. 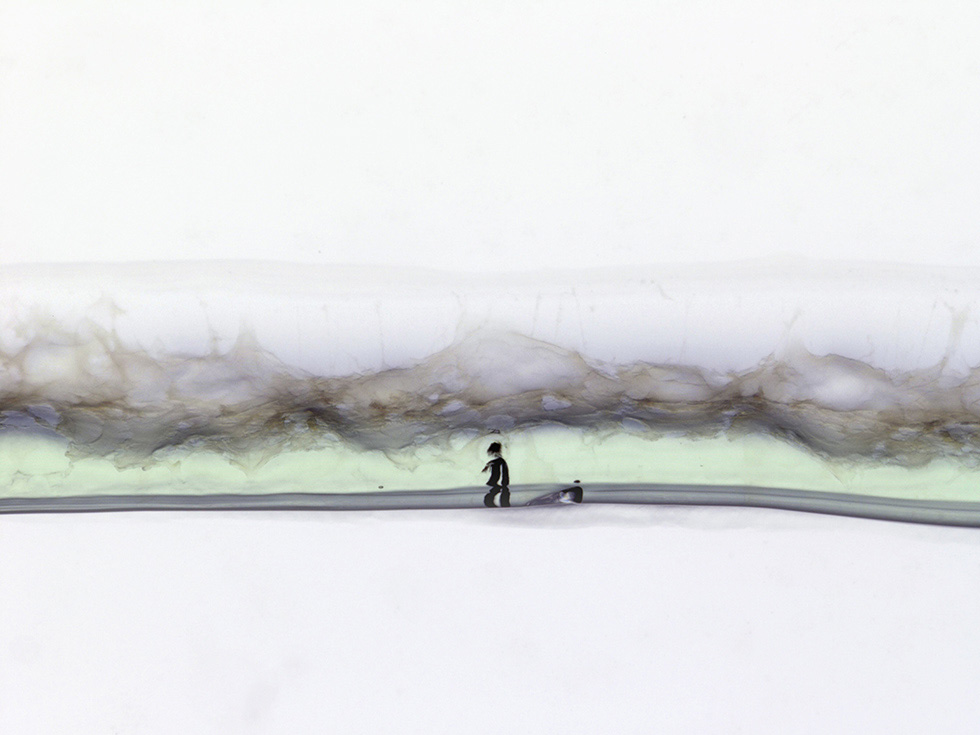 What looks like a tiny figure out for a long walk is actually a close-up view of an imperfection in a thread-like material called a "core-shell" filament. The filament is made with a core of collagen -- a protein common in skin, hair and nails -- encased in a gelatin shell. In this case the collagen was isolated from rat tail, while the gelatin was made from pig skin. Such filaments may one day provide a scaffold for scientists making complex human tissue like blood vessels or hair follicles in the lab. The photo is magnified 20 times.

Incredibly thin layers of titanium and carbon atoms mimic the snake-like visage of Lord Voldemort -- the famed villain of the Harry Potter books -- in this scanning electron microscope image. The material was made by etching the aluminum away from a titanium-aluminum carbide structure, leaving two-dimensional layers. The compound is one of a new class of materials called MXenes, which may find applications as the electrodes in future batteries and supercapacitors.

Armin VahidMohammadi, a graduate student in materials engineering at Auburn University in Alabama, took the image and first thought the tiny particle looked like the head of a cobra. Later, when he started to color the image, he saw the resemblance to "He-Who-Must-Not-Be-Named." In addition to adding color, VahidMohammadi enhanced the brightness and contrast of the image and added hints of eyes and teeth. A big fan of the Harry Potter stories, he says he hopes to find a particle that looks like another character in the series next time. 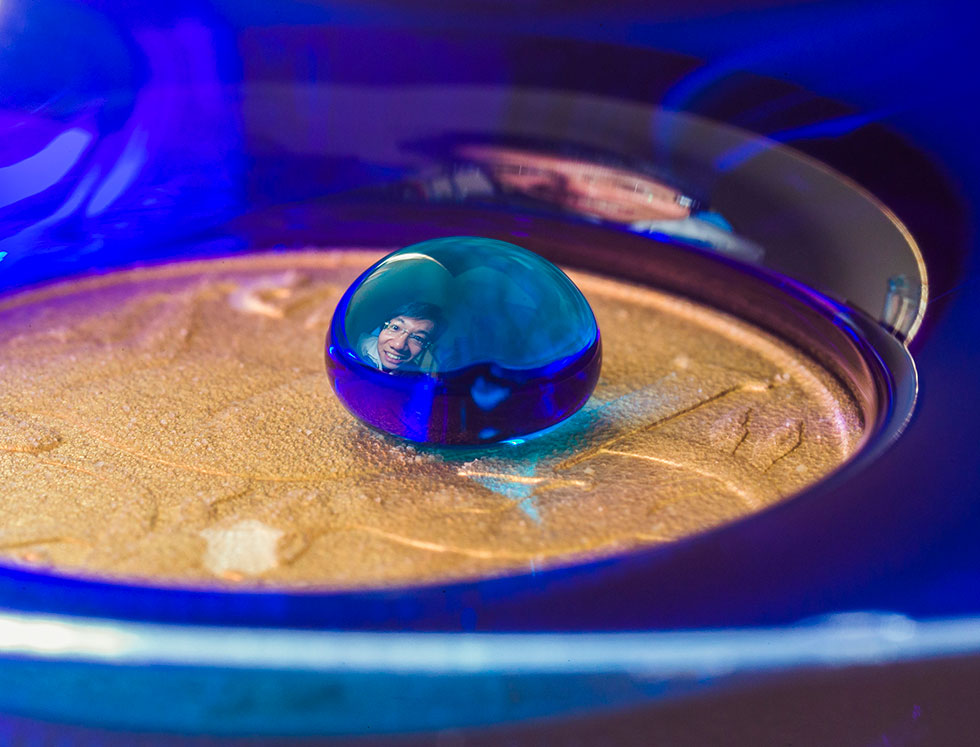 The "wall of water" around this Australian coin is created by a superhydrophobic, or ultra-water-repellent, coating. The coating is made of sandlike particles, supported by a polymer mesh that's woven together at the molecular level. The face of William Wong, a graduate student at the Nanotechnology Research Laboratory at the Australian National University in Canberra, is reflected off a bead of water that sits on a layer of air above the coating.

Water "dislikes" the coating so much that it rises up like a wall around the edge of the coin, a phenomenon dubbed the "Moses effect." Any droplet on the surface will easily roll off, taking dust and dirt along with it.

Wong said the coating is more robust and transparent than typical superhydrophobic materials, and might find uses in self-cleaning solar cells, disposable packaging and spray-on screen protectors for phones. He took the photo with the help of Australian National University photographer Stuart Hay. They had to precisely position everyone and carefully time the lighting to get the shot.

The Heart of a Volcano 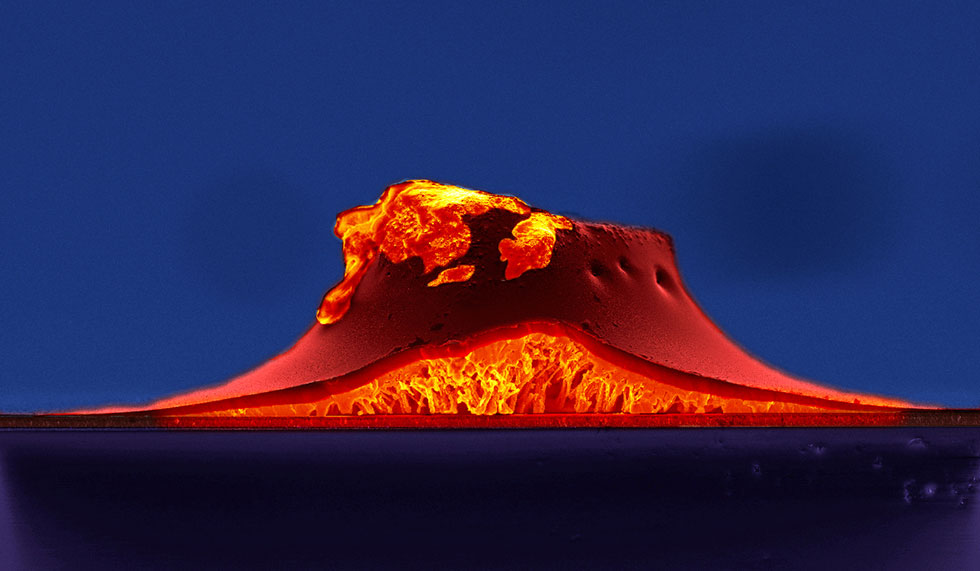 An errant speck of dust likely settled on this cross-section of a thin-film solar cell during the manufacturing process, causing a protrusion that looks like an erupting volcano. Yinghong Hu, a graduate student in materials science at the Ludwig-Maximilians-University in Munich, and her co-worker Andreas Binek took the image with a scanning electron microscope. The defect would harm the efficiency of the solar cell, but Hu was struck by the evocative shape. She added colors and enhanced the contrast of the picture with Photoshop to suggest a molten core.

Solar cells like this one contain materials with a so-called perovskite crystal structure and are relatively inexpensive to manufacture. Since they were first made in 2009, their efficiency has skyrocketed from under 4 percent to more than 20 percent, rivaling traditional silicon solar cells. 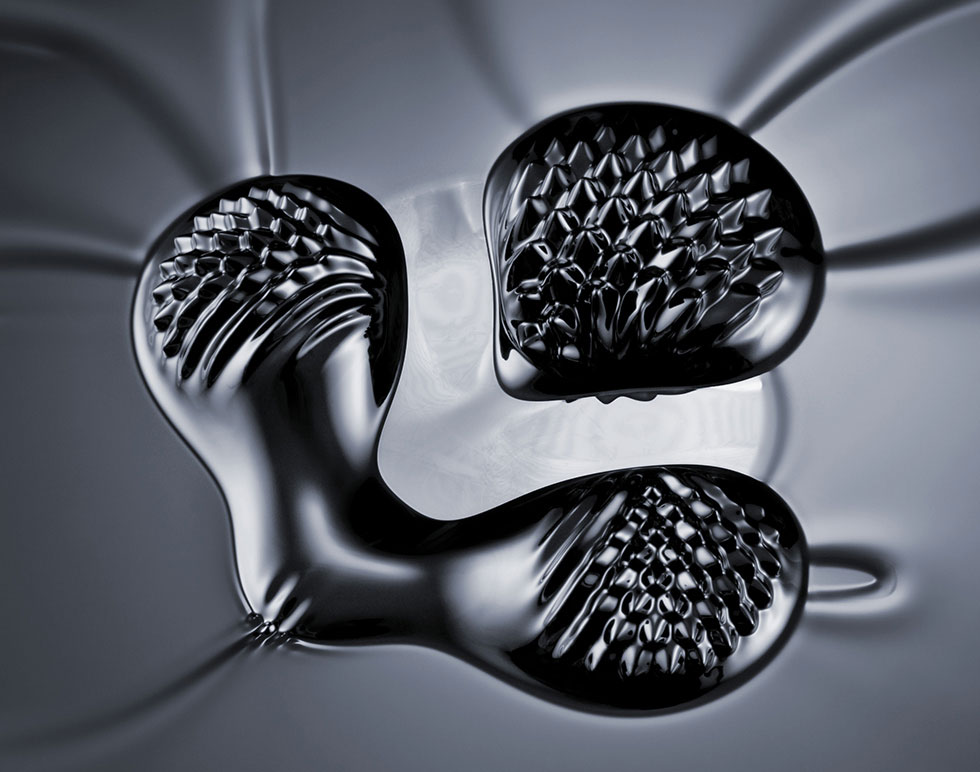 This photo freezes the dynamic dance of a ferrofluid in a magnetic field. Ferrofluids contain tiny magnetic nanoparticles and respond to magnetic fields by moving, shape-shifting and even changing how easily they flow. The properties can be engineered by altering the size of the nanoparticles.

To capture the image, photographer and physicist Aleks Labuda, who works at the scientific instrument company Asylum Research, placed four magnets underneath a silicon wafer that supported the ferrofluid. Three magnets pointed north, while the bottom left one pointed south. You can see waves in the ferrofluid coming in from outside the picture.

Ferrofluids can smooth vehicle suspension systems and improve the performance of loudspeakers, among other applications. 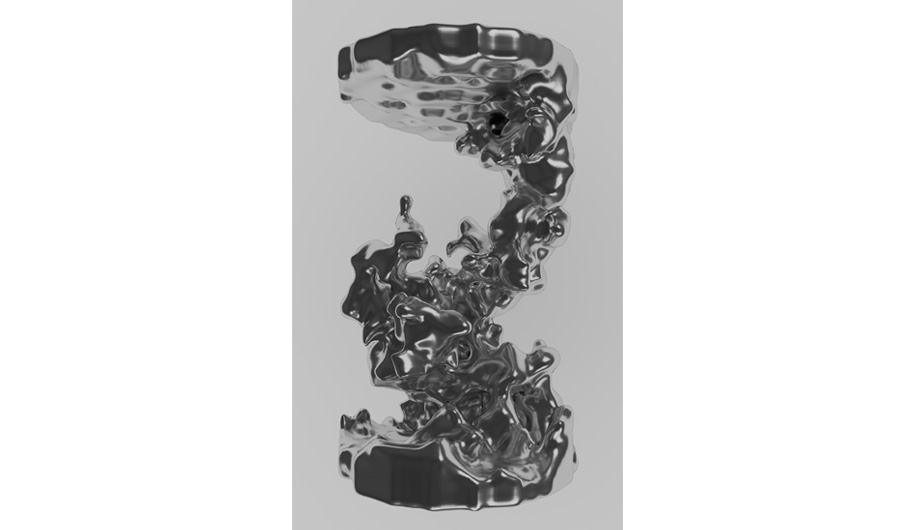 This intricate metal structure grew inside a lithium metal battery as it was recharging. Called a dendrite, it represents a major challenge for battery researchers, since it harms performance and may cause dangerous short-circuits that lead to fires.

The image was taken with a Magnetic Resonance Imaging (MRI) machine, the same type of machine that doctors can use to capture images inside the human body. Since it's difficult and time-consuming to image the lithium dendrites directly, Andrew Ilott, a physical chemist at New York University, and his colleagues found a clever work-around -- imaging the surrounding hydrogen-containing molecules to see the "shadows" of the dendrite.

Ilott took the negative of the MRI image, applied some smoothing, and digitally rendered it using a metallic texture. "Even we were surprised at how beautiful and elegant the structures appear to be," he said.

Rechargeable batteries with lithium metal anodes could store more energy than current battery technology -- if researchers can figure out a way to stop dendrite growth. Using their MRI method, Ilott and his colleagues could see dendrites growing in real time -- an important step toward understanding how to prevent them. Until then, the pesky dendrites create beautiful art.