Studying fly sex may lead to a better understanding of addiction in humans.
Image 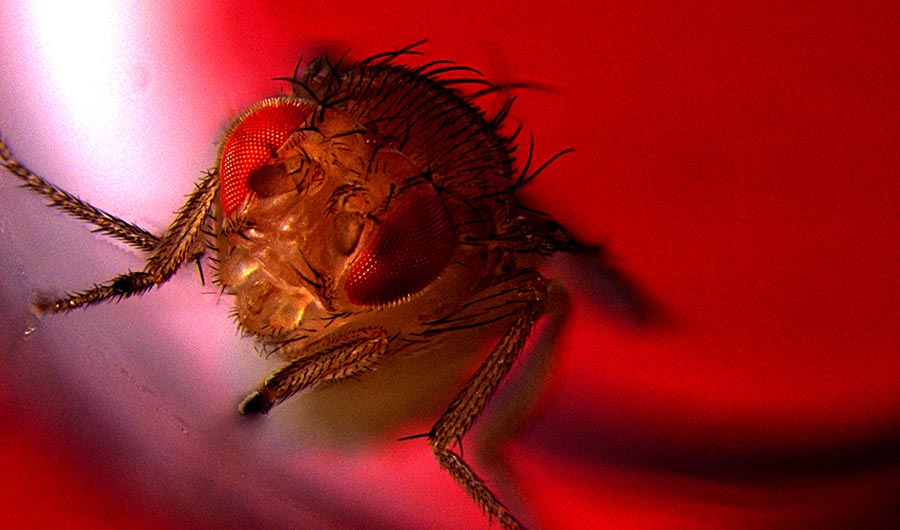 (Inside Science) -- Birds do it. Bees do it. And, of course, humans do it. Sex is almost universal, and most animals -- including ostensibly simple creatures like the fruit fly -- seem to like it.

But male fruit flies, according to a new study, experience pleasure when they ejaculate, showing that flies may have more similarities with men than you might think.

The new experiments, published today in the journal Current Biology, also reveal more details about a fly's neurological reward system, which could lead to a better understanding -- and perhaps better treatments -- of addiction in people.

"There's a tendency to think the human brain is unique, and we're unique, and we experience pleasure in a unique way," said Galit Shohat-Ophir, a neuroscientist at Bar-Ilan University in Israel. But that's not necessarily the case.

"Sexual interaction is pleasurable and rewarding for male flies in a similar way as mammals," she said. These neurological reward systems are primitive, thought to have emerged long ago in the shared evolutionary history between human and fly.

Fruit flies even engage in foreplay. The male approaches his love interest and faces her. He then goes around and taps her bottom. He vibrates his wing, singing her a love song. There's licking of her genitalia. If she reciprocates his desire, they copulate.

Shohat-Ophir previously found that for male flies, at least, mating is pleasurable. After sex, the insects' brains show an elevated level of a compound called neuropeptide F, or NPF -- a key chemical that's involved in its response to rewards like food and sex. Humans have a similar chemical called neuropeptide Y, which is involved in eating, sleeping, stress response, arousal, and regulating alcohol consumption.

The previous experiments also suggested that the rewarding part of sex was the last and necessary step for reproduction: the release of sperm and seminal fluid. But because those studies didn't focus on ejaculation, the researchers couldn't be sure.

To test this hypothesis, Shohat-Ophir and Shir Zer-Krispil, a graduate student at Bar-Ilan University, worked on a new series of experiments using flies that were genetically engineered to ejaculate in response to red light. The red light's longer wavelengths can penetrate tissue in the flies' abdomens and reach the corazonin neurons that are responsible for ejaculation. When those wavelengths reach light-sensitive proteins in these neurons, they induce the release of sperm -- which, apparently, the flies enjoy.

The flies can't see red, but when given the choice of hanging out in an area that's dark or one illuminated in red light, most of them preferred the light and its sexy effects. The researchers also trained flies to associate ejaculation with a particular odor. Afterward, the flies preferred the scent that reminded them of past pleasures.

Bathed in post-ejaculatory bliss, the flies had higher levels of NPF and even eschewed alcohol -- another sign that ejaculation was pleasurable. Normally, the taste of alcohol is rewarding. But a fly's reward system is like a reservoir, Shohat-Ophir explained. When the reservoir is filled and NPF levels are high, a fly doesn't seek other forms of reward, including alcohol.

"The science is extremely well done," said Ulrike Heberlein, a neuroscientist at the Janelia Research Campus in Virginia, who did not collaborate on this research but has worked with Shohat-Ophir before. "It really distinguishes the different phases of the mating event."

So, if the flies experience pleasure, do they have orgasms? It's impossible to know, since the definition of an orgasm is based on human perception, Heberlein said. "We can never ask an animal what it feels."

Understanding natural rewards associated with sex could offer insight into drug abuse and addiction, she said. "It's pretty much universally accepted that what drugs of abuse do is they hijack these centers for natural rewards."

In fact, according to Shohat-Ophir, the reservoir analogy could be useful for understanding addiction in humans. Those who may be more susceptible to addiction might have a larger reservoir. So to fill it, they tend to seek more drugs or alcohol to trigger their brains' reward centers. Or, they might be more sensitive to changes in rewards.