Meet the Moth That Produces Both Bird and Ant Repellants

The wood tiger moth employs an arsenal of different weapons to defend itself.
Image 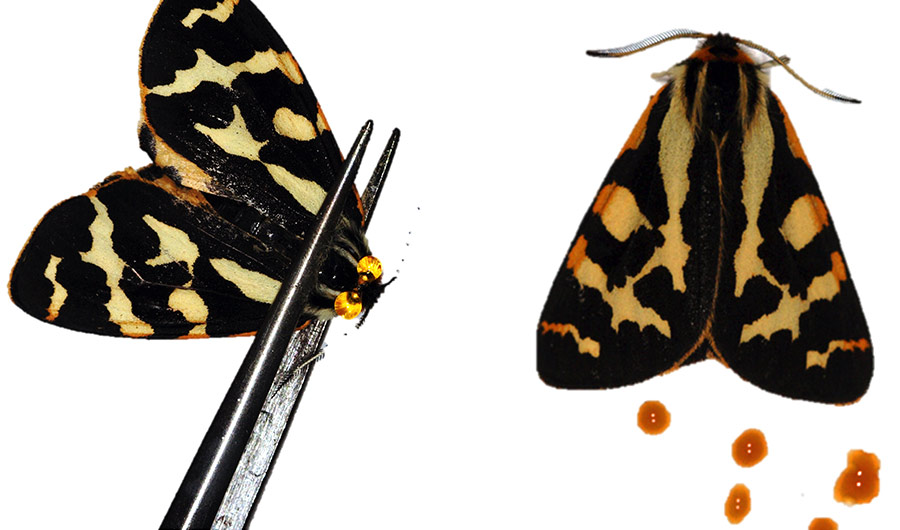 (Inside Science) -- Fancy a wood tiger moth for lunch? You may be in for a mouthful of misery, regardless of whether you are a human, a bird or an ant. According to new research, these colorful European moths have two separate chemical defenses to repel different types of predators.

The first defense appears to be aimed at birds, which typically attack moths by seizing them by the head. Glands just behind the moth's head release a foul-smelling fluid when squeezed. Researchers suspected that birds dislike it as much as humans, since birds have been seen dropping wood tiger moths in apparent disgust.

"[The bird] wipes its beak, saying, like, this is horrendous," said Bibiana Rojas, an evolutionary ecologist at the University of Jyväskylä in Finland and first author of the study published today in Proceedings of the Royal Society B.

Defense number two is a fluid that leaks from the moth's anus at the end of its abdomen. While the neck glands are only activated by squeezing, the abdominal fluid flows in response to more subtle disturbances -- like, perhaps, the feathery touch of an ant's antennae. Adult moths are vulnerable to ants when it's too cold for them to fly, as well as when they first emerge from their cocoons with wings wet and crumpled, said Rojas.

In one set of experiments, the researchers treated oat flakes with neck fluid, abdominal fluid, or plain water, then presented the flakes to small chickadee-like birds called Eurasian blue tits. The birds didn't seem to mind the abdominal fluid, but they clearly disliked the neck fluid, eating far fewer of the neck fluid flakes. After their first taste of neck fluid, the birds became reluctant to approach the next oat flake, taking about four times as long as they had in previous trials.

The researchers think the reason for the aversion may be a smelly volatile compound called 2-sec-butyl-3-methoxypyrazine. They found that this chemical component alone was enough to turn a bird off its oat flakes.

In the next set of experiments, the researchers placed drops of diluted, sweetened moth fluids on acetate discs, then laid the discs in the path of ant trails they found in the forest. Surprisingly, the ants liked the neck fluid mixture even more than plain sugar water, perhaps because neck fluids contain nutritious amino acids, said Rojas. In contrast, most of the ants that tried the abdominal fluids turned away after a single sip.

Researchers have speculated before that some animals may produce different chemical deterrents for different types of predators. But to the best of Rojas's knowledge, this is the first time anyone has used the behaviors of the predators themselves to show that such diverse chemical arsenals really exist. The findings, she said, make it clear that species "can have different weapons for different enemies."

The study also found that a moth's appearance may give predators advance warning about the dangers inside. Some male tiger moths have white hindwings, while others have yellow hindwings. Previous research has found that yellow-winged moths are less likely to get eaten by birds, suggesting that predators learn to avoid the yellow color. In the new study, ants and birds were more repelled by fluids from yellow moths than by fluids from white moths, suggesting that yellow moths have more potent defenses.

While both neck and abdominal fluids apparently deter predators, it's not obvious that the abdominal fluid evolved specifically for that purpose, noted Deane Bowers, an entomologist and chemical ecologist at the University of Colorado, Boulder who was not involved in the study. Like many moths, wood tiger moths don't eat or digest food as adults, but they do build up waste during their metamorphosis that they must excrete after emerging from the cocoon. This waste seems to be the same thing as the abdominal fluid, so moths might still excrete it even if ants were out of the picture.

Nevertheless, said Bowers, the study clearly highlights the diversity of defenses that insects can possess.

"We need to start looking at other species for these kinds of dual defenses," she said. "It's probably more common than we realize."