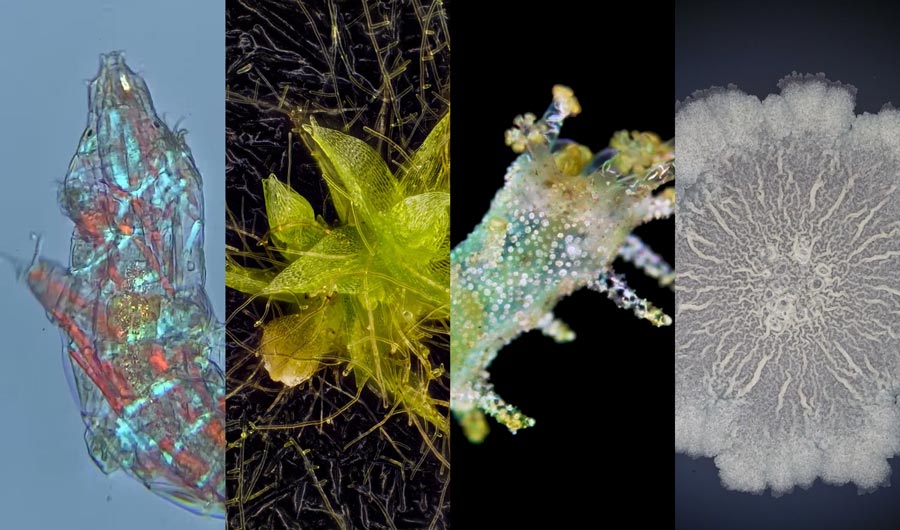 (Inside Science) -- Microscopes, focused on something as simple as a drop of pond water, can open a portal to a new world filled with fantastic creatures. Since 2011, the Nikon Small World in Motion video contest has highlighted movies that reveal tiny marvels invisible to the unaided human eye. The winners of this year's contest were announced last month. Inside Science has selected the videos we found most visually appealing and delved into the science of the fascinating phenomena they show.

In this video, we witness the growth of a freshly cut moss plant, placed on black filter paper and fed nutrients and water. Surrounded by a glowing ring of LED lights, the plant slowly opens its leaves. Then, threadlike chains of cells called protonema -- the earliest stage of moss development -- shoot out in all directions, start to branch, and eventually fill the screen. Meanwhile, a new shoot with leaves also emerges.

Wojtek Plonka, a chemist by trade but also an amateur photographer, made the video. The movie combines more than 100,000 still images taken in 10-minute intervals over the course of 10 days. To capture the full depth of field of the final movie, Plonka rigged his instruments to snap 88 images at different focal distances for each point in time. He then staked the images together to make a single frame. In total, the project consumed more than 500GB of disk space.

"Humans are capable of perceiving movements or changes occurring within a very limited range of timescales," Plonka wrote in an email to Inside Science. "A lot of phenomena are too fast for us to see, like the formation of lightning, flexing of an arrow shot from a bow, not to mention nuclear reactions. A lot of them are too slow, and plant growth is one of them. … Time lapse movies allow us to see the slow processes and their application to the microscopic beauty of the moss is what I intended to show."

Tardigrades, also known as water bears or moss piglets, are one of the most beloved microscopic creatures, and for good reason. These tiny animals combine amazing hardiness with a touch of cute.

"Tardigrades are like the 'holy grail' for amateur microscopists and are some of my favorite organisms to find when I take a sample," wrote Martin Kristiansen, who took a video of a strolling tardigrade with a smartphone mounted on his microscope. "Even though they are so small, they resemble larger animals a lot."

In the video, we can see the muscle fibers of the tardigrade stretch and shrink as it walks. Kristiansen took the video using polarized light, in which all the light waves are oriented in the same direction. When the light waves hit the muscles, their orientation shifts, which is captured in the video as a color change. The muscles seem to change from red to blue and back, depending on the fibers' orientation to the light, making the tardigrade look "like a microscopic disco dancer," Kristiansen wrote.

When Kristiansen was studying for his bachelor's degree in medicine, he was amazed by the cells he looked at under the microscope. He decided to buy his own instrument and started examining samples from nature. His amazement only grew. "When I look at organisms like tardigrades it's like I am looking at aliens, but these aliens live all around us. We are just not able to see them without a microscope," he wrote. He shares many of his videos and images on his "My Microscopic World" social media pages.

Off the rocky coasts near São Sebastiao, Brazil, patches of brown seaweed called sargassum harbor a multitude of sea life, from sponges to small fish. The young of many species find shelter and food amongst the seaweed. Alvaro Migotto, a professor at the Center for Marine Biology in São Sebastiao, was looking through a microscope at a sample of sargassum when he spotted a juvenile sea cucumber, less than 1 centimeter long. Sea cucumbers start life as swimming larvae. When they morph into juveniles, they display translucent bodies that thicken as they age. This young animal was still see-through, making it possible to view its internal structure.

"What caught our attention in the footage are the skeletal little structures that sea cucumbers have embedded in their body walls. They are calcareous ossicles that have incredibly beautiful and varied shapes," Migotto wrote in an email to Inside Science. He used a polarized light system to highlight the calcium-containing structures in a glowing rainbow of colors against a dark background.

In the video, the sea cucumber waves small tentacles. The tentacles surround its mouth and it uses them to capture plankton and other tiny food particles to eat.

"In the video it is possible to see that ossicles are present even inside the tentacles," Migotto wrote.

An individual bacterium is tiny, but a colony can form an integrated and complex community millions or billions strong that covers large swaths of natural real estate. This video showcases the growth of such a community for the common soil-dwelling bacteria Bacillus subtilis. The video opens after a small droplet of a bacteria-containing liquid has been placed on a solid surface where the microbes can feed and grow. As the bacteria multiply, the drop becomes visible and spreads outward. By the end of five days, millions of cell divisions have created a large, complex and cooperative bacterial community, called a biofilm, that's about 2 centimeters across.

"Biofilms are literally everywhere. Around us and within us. They are on our teeth, they are in our kitchen and bathroom drains, they are on our boats and ships. ... They are the cause of many chronic diseases and bear an immense global financial importance," wrote Momir Futo, a postdoctoral researcher at the Ruđer Bošković Institute in Croatia who made the video.

The video stitches together 1,200 still images, taken every six minutes over the course of five days. One of the challenges Futo faced was to maintain an optimal temperature and humidity in the petri dish where the bacteria grew, while also getting clear pictures. He had to open the petri dish every six minutes, snap a photo, and close it again. Rather than face a sore arm and sleep deprivation, Futo automated the camera and constructed a small robotic arm whose sole purpose was to open and close the dish.

He says the video highlights key changes in the biofilm as it grows from a few cells into a simple colony, then later starts to display complex architectural features typical of biofilms. "[I]t reminds us of a developing organism, doesn't it? Well, in a sense, it is exactly that," he wrote.