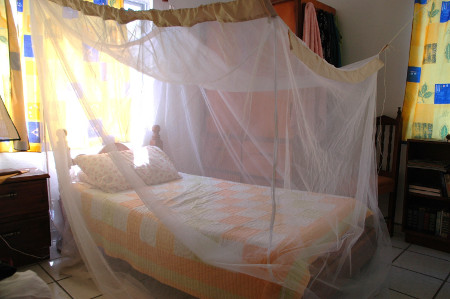 A barrier of fog could make mosquito nets like this unnecessary.

(Inside Science) -- Mosquito bites are a scourge to campers and spread deadly malaria infections. While nets and insecticides have long been the answer to blocking the winged menaces, researchers have discovered a simple way of grounding mosquitoes: fog.

Even though mosquitoes can fly in torrential rainstorms, the tiny water molecules of a dense fog cause the insects to take a swift plunge to the ground, Georgia Institute of Technology researchers reported at this week's American Physical Society's Division of Fluid Dynamics meeting in San Diego. The researchers used high-speed cameras to capture the rapid movements of mosquitos. When a humidifier blanketed a mosquito's flight path in fog, the mosquito quickly tumbled to the ground. The mosquito was still able to beat its wings fast enough to lift its body, it just couldn't keep itself parallel to the ground.

While the researchers still don't know what caused mosquitos to stall in the fog, they theorize that the small, knob-like appendages behind a mosquito's wings called halteres are to blame. The halteres beat quickly during flight, stabilizing the mosquito. Scientists think that when the insect's halteres become coated in small droplets of fog, a mosquito can't stay level and plummets to the ground. The researchers propose that dense fog barriers could block mosquitos from entering open doors and windows in parts of the world where malaria is common.