This Father's Day I celebrate the man who taught me science is a state of mind. 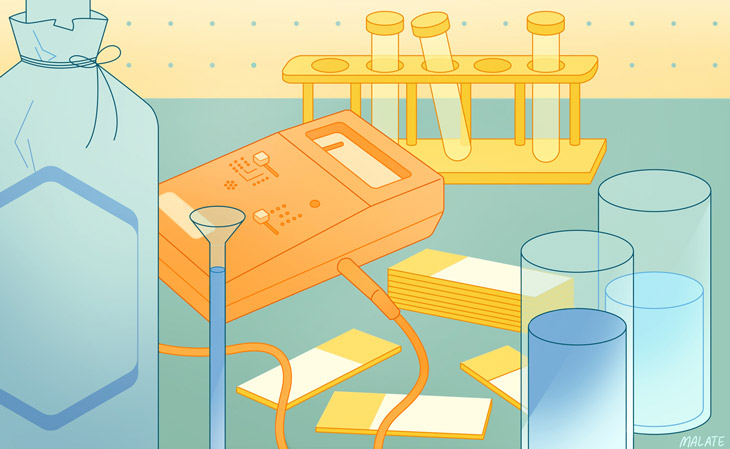 (Inside Science) -- Mix one part anise-flavored liquor and three parts water. Confirm that liquid turns cloudy. Pour into a centrifuge tube and spin at 1500 rpm.

This isn’t a new cocktail recipe, but the culmination of science experiments my dad -- a retired chemistry lab worker -- recently performed on raki, a Turkish spirit similar to Greek ouzo and French pastis.

The scientific quest started with a simple ritual: the gathering of family around a table to eat and drink. Over the Christmas holidays my Turkish husband Tunay, my parents and I decided to set a "locksmith’s table," the poetic name Turks give to a spread of appetizer-like mezes and glasses of Turkey's popular, licorice-tasting tipple. Presumably you spill your secrets when you’re plastered enough.

Straight from the bottle raki is around 45 percent alcohol, so drinkers traditionally opt to dilute it. When you add water, the liquid transforms from clear to creamy white, a phenomenon that explains why the Turkish nickname for raki is "lion’s milk."

As we poured, I tossed out a question. "Why do you think raki turns white?" I expected it would elicit some idle speculation, maybe a haphazard Google search. Then again, I should have known my dad better.

My father grew up an only child in 1950s urban New Jersey, right across the Hudson River from Manhattan. The city was loud, dirty and unappealing. He avoided the crowds, instead amusing himself with transistor radios and experiments conducted in the basement with bottles of chemicals he picked up from a local hardware store.

He was the first of his immediate family to go to college, where he majored in chemistry. After a brief stint in the Navy, my dad tuned up his Ford Falcon and took a road trip out West. He stopped in Colorado when he ran out of money.

In the anemic 1970s economy, he first worked as a lawnmower salesman and a cement truck driver. He took real estate classes and became an independent appraiser. For a large part of my childhood he worked from a home office tallying square footage and accessing property records. But science was always his true calling.

A part-time job teaching after-school and summer classes for the University of Colorado's Science Discovery Program eventually led to a gig in the chemistry department, where my dad supervised the undergraduate labs and prepared in-class demos such as potassium igniting in water and air pressure crushing 20-gallon drums. Fire and explosions could wake up a sleepy student in the back row of an enormous lecture hall.

My dad was always glad he found a way for chemistry to pay the bills in the end. He enjoyed sharing his passion with the undergraduates taking classes and working in the labs. 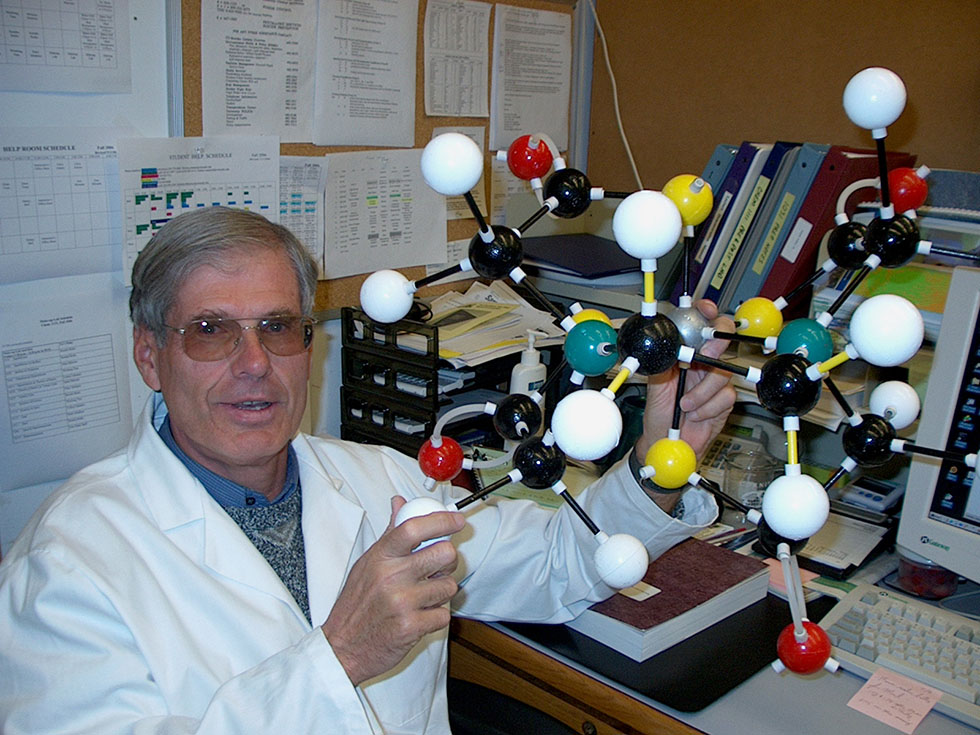 The author's father, Bob Meyers, holds a large molecular model that he assembled for a chemistry class.

When my dad retired he took his love of science into the next phase of life. These days he can often be found reading a book about the history of the physical sciences, or setting up his own hands-on experiments.

One of my dad's first projects after retirement was an analysis of the house's radon levels. Radon is a radioactive gas that's naturally released from the breakdown of uranium in the ground. The Environmental Protection Agency recommends every homeowner test their radon levels, and my parents had done this when they bought their house in the 1990s.

But in the years since, they had installed energy-saving windows. My dad started to wonder: Were the new windows sealing in not just the climate-controlled air, but also the radon?

He purchased two types of radon monitoring kits and compared the findings. Just for fun, he also used a Geiger counter to record the radiation throughout the house. Geiger counters detect radiation from many different sources, but when he saw a significant decrease the higher up in the house he went, he figured heavy radon gas seeping from the ground and settling in low areas was playing a role in the readings.

When the radon-specific results came back near the level at which the EPA recommends a radon reduction system, my dad installed a network of plastic plumbing pipes and fans to ventilate the crawl-space area beneath the house. Another extensive round of testing confirmed the radon levels had indeed gone down.

My dad applied the same diligence to our family cat Isis' health. As Isis reached her sunset years she began to suffer from recurrent bladder infections. My parents wanted to catch the infections in their early stages and administer antibiotics before the worst symptoms appeared. So my dad started centrifuging cat pee.

From the vet he learned that white blood cells in urine signal a problem. He collected cat pee from a tray under Isis' litter box, but he needed to process it to effectively detect infections.

He bought a hand-cranked centrifuge to spin vials of cat urine in a swift circle until any white blood cells were forced to the bottom. He transferred the concentrated solids to a microscope slide, applied a stain he had made himself, and then looked at the sample under 400 times magnification. More than a few red-stained blobs indicated an infection was setting in. My parents monitored Isis' antibiotic needs in this way for about a year, sparing her multiple distressing trips to the vet.

The centrifuge was still in my dad's workshop when our minds turned to raki's clear to cloudy color change that evening in December. 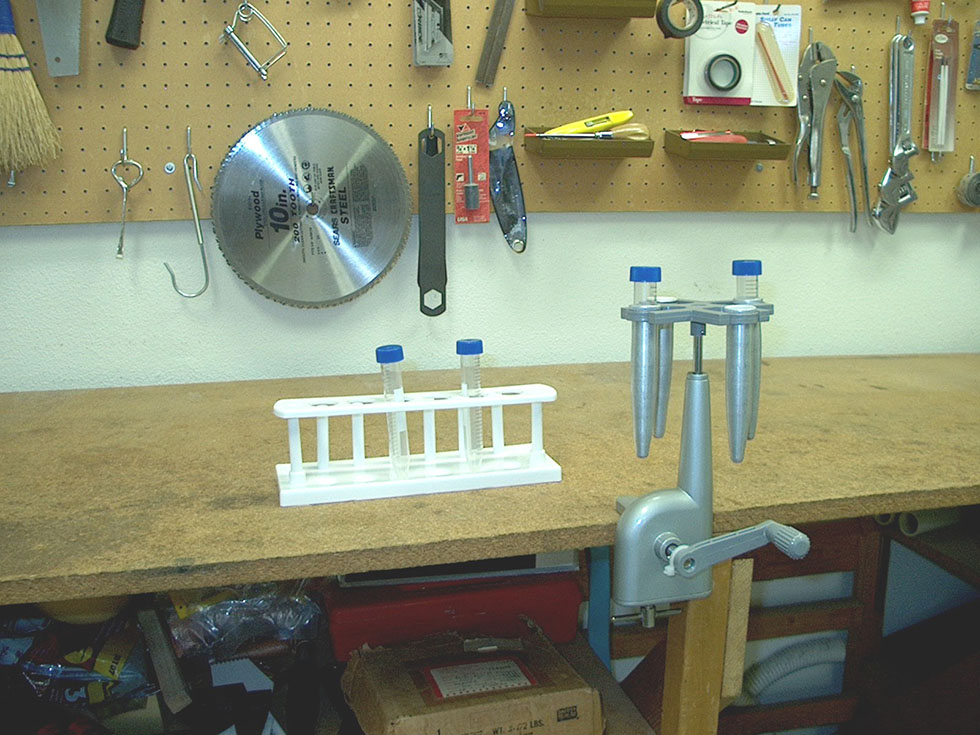 My dad had a straightforward guess for what was happening: some ingredient in the raki dissolved easily in alcohol, but not water. Adding the water forced it out of solution. We tested this by pouring ethyl alcohol into a sample of cloudy raki, and confirming that it turned clear again. It was enough testing for slightly tipsy experimenters, and Tunay and I had to leave the next morning. Still, we didn't know what ingredient was coming out of solution or why it stayed suspended for so long instead of settling at the top or bottom of the glass.

My dad continued his experiments, emailing me a dispatch a few weeks later. He had determined the color change happens at approximately 60 percent added water and 40 percent straight raki. He had examined the cloudy raki under a microscope after adding food coloring for contrast and could see small droplets. He estimated they were approximately 1 micron across, about 1/50 the diameter of a human hair. He also tried centrifuging the cloudy raki to separate the droplets, but after about 5 mins of spinning nothing had happened.

When I got my dad's email, I decided to do some research of my own. As a science writer I often take the short-cut to scientific insights -- I call researchers and ask them to tell me what they've found out.

I tracked down a 2003 paper on the "ouzo effect" -- named after the Greek version of raki -- and contacted the authors.

It turns out my family's curiosity was similar in some ways to the reaction of Joseph Katz, a professor emeritus in the department of chemical and biomolecular engineering at Johns Hopkins University in Baltimore, Maryland.

Katz was visiting family in the 1960s when his father-in-law offered him a drink of ouzo, poured in some water and turned it milky.

"I sat there for two minutes, maybe three, thinking about it," Katz said. "My father-in-law thought I was sick, he got worried."

After a few minutes of puzzling, Katz had figured out the general mechanism -- adding water caused the anise oil dissolved in ouzo to spontaneously and rapidly pop out of solution and form very small, stable droplets dispersed throughout the surrounding liquid. The minuscule droplets scattered light so that the liquid looked white.

Decades later Katz resurrected the ouzo question when an undergraduate chemical engineering student, Steven Vitale, asked to do research together. Vitale didn't share Katz' appreciation for sipping ouzo ("I think it tastes awful," he told me over the phone), but the two shared a driving scientific curiosity.

Katz and Vitale's eventual experiments were much more hardcore than my family's. Over the course of two academic years and one summer they constructed elaborate measuring apparatuses and gathered thousands of data points. They didn't use actual ouzo, but a combination of water and different chemicals with similar properties to alcohol and anise oil.

Vitale, who's now researching next-generation computing technologies at MIT's Lincoln Laboratory, said the anise oil droplets in diluted ouzo, raki, and other anise-flavored liquors stay dispersed throughout the drink for a long time because they are so tiny and their density is similar to the density of the surrounding liquid.

The droplets in the drink will eventually rise to the top and coalesce, but the process is very, very slow, he said. "Nobody lets their glass of ouzo sit that long." Vitale said if my dad had cranked on the centrifuge long enough he probably could have gotten the liquids to separate.

Katz and Vitale found that the diameter of the "ouzo effect" droplets depends on the oil to alcohol ratio and that the number density of droplets can be controlled by changing the amount of water added. Their 2003 paper has been cited hundreds of times and has guided new lines of research, including efforts to apply the "ouzo effect" to targeted drug delivery.

In many ways Vitale and Katz' experiments and my dad's were worlds apart -- in the time dedicated, the sophistication of the equipment used, the level of understanding reached, and the quantitative results produced.

But the two approaches are linked by an infectious curiosity and an unstoppable urge to prod and poke at nature with whatever tools you have at your disposable until it spits out a new bit of information.

My dad's science experiments don't push the boundaries of human knowledge. Still, some experiments help him solve everyday problems, ensuring a safe house and a healthy cat. And some, like the raki adventure, are just pure fun.

My dad taught me that scientific thinking is for everyone -- truck drivers, lawnmower salespeople, real estate appraisers, lab technicians, and retirees. Simply stated, it's the process of asking a question, coming up with a possible answer, and then finding ways to test it. Even if you’re not a scientist, you can think like one. An idea for a new experiment could come from anywhere.

I won't be home this Father's Day, but I'm looking forward to my next visit. Perhaps my dad and I can determine how long we have to turn the centrifuge to separate the anise oil and make milky raki clear again. We could celebrate our new discovery with a drink.

"I only used 10 milliliters of the raki for my experimentation so there is plenty left," he emailed me.