Astronomers are trying to deflect a near-Earth asteroid for the first time, to prepare for a future object on a collision course with the planet. 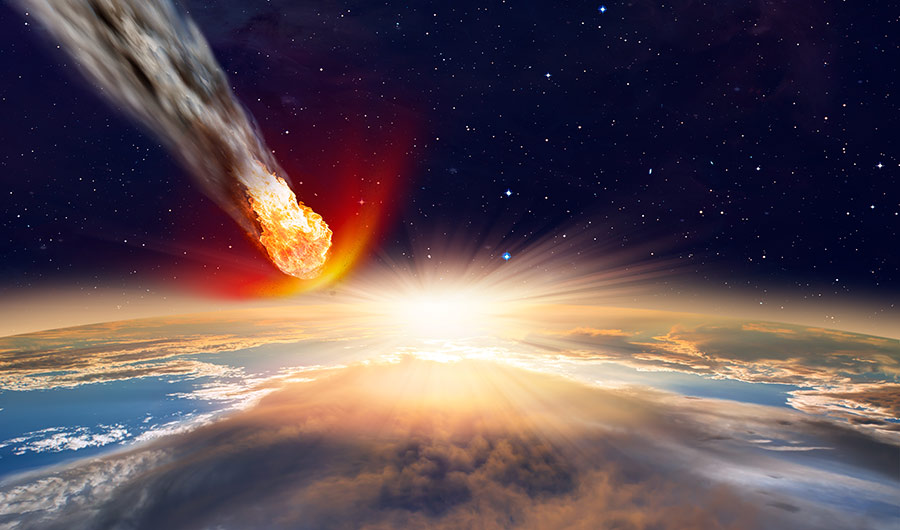 (Inside Science) -- Science fiction books and films have frequently featured the threat of a giant asteroid colliding with our planet and making humans go the way of the dinosaurs. But smaller space rocks also pose threats, and they tend to be harder to spot in advance.

A massive asteroid on a collision course would sail through our atmosphere and explosively burst in the air or crater the ground. Its invasion would initiate blasts of fire and thermal radiation, and likely cause numerous casualties. Even asteroids falling into the ocean could drive tsunamis or earthquakes -- and even create undersea craters.

But if space scientists become aware of the threat of a hazardous asteroid early enough, they might be able to give it enough of a nudge to knock it off its disastrous course, long before it approached Earth. That’s the idea behind NASA’s Double Asteroid Redirection Test, known as DART. It's a spacecraft that’s set to launch in 2021, on course to deliberately smash into an asteroid in the fall of 2022.

More stories about asteroids from Inside Science

Accelerating The Search For Killer Asteroids

How Big Does An Asteroid Have To Be To Destroy All Life?

Lasers Could One Day Stop Asteroids From Striking Earth

“It will be the first-ever asteroid deflection test,” said Megan Bruck Syal, a physicist at Lawrence Livermore National Laboratory in California and member of the DART team. She points out that there could be tens of thousands of asteroids as big as DART’s target, and the majority of them haven’t been discovered, let alone tracked, yet.

Bruck Syal and other experts presented their research at a conference dedicated to “planetary defense” near Washington, D.C., last week. It even included presentations about how space law applies and about the risks of violent conflict if deflection missions like DART don’t go according to plan.

DART has its sights set on the smaller member of a binary near-Earth asteroid system called Didymos, which NASA classifies as “potentially hazardous” since its orbit brings it near the Earth within one-twentieth the distance between our planet and the sun. The main asteroid in the system spans 800 meters across, while its orbiting “moonlet,” which DART is aimed at, measures about 150 meters in size. By going after a binary system, it will be easier to precisely measure the deflection and use the data to inform future missions should a real asteroid threat materialize.

Didymos’ moonlet matches the size of typical asteroids that could be especially hazardous to Earth. “As you get smaller, there are many more asteroids, but as they get smaller, they carry less energy,” said Donovan Mathias, an aerospace engineer at NASA Ames in Mountain View, California. Based on his team’s models, asteroids between 100 and 200 meters across have the highest probability of striking the Earth and causing substantial damage. Smaller asteroids are more likely to break up into mostly harmless pieces and burn up in the atmosphere, while larger ones are much rarer and easier to find and track.

DART’s main body is about the size of a small car, with added solar arrays. It weighs more than 1,100 pounds. It will be traveling about 14,000 mph when it crashes into the city block-sized moonlet. Scientists expect the collision to change the moonlet’s velocity by just 1 millimeter per second, about 0.002 miles per hour. A nudge like that barely changes the asteroid’s course, but if done years before a projected impact, it can make all the difference.

How the impact plays out and how much momentum DART transfers to the asteroid depends on lots of factors, including the asteroid’s strength and internal structure. “We’re trying to anticipate how much we can actually deflect the Didymos asteroid, and that’s quite challenging because we don’t know what the asteroid is made of,” said Sabina Raducan, a planetary scientist at Imperial College London who has been simulating the impact scenario. “We want to have a very weak, less porous body,” she said, since a hard rock would hardly budge and something that absorbs the impact would defeat the purpose of the collision, too.

Before DART’s suicide mission comes to an abrupt end, LICIA, a small Italian-made satellite, will separate from the spacecraft and take photos of the impact and any flying debris or crater it creates. European Space Agency astronomers plan to launch a spacecraft called Hera as well, and it will arrive a couple years after the collision to study the aftermath, probing the surface and interior of the asteroid and remeasuring the orbit, to see how effectively DART deflected it.

In the case of a real-life killer asteroid, people may only get only one shot to deflect it, so there’s plenty of pressure to get the math right. There's also a chance that throwing a spacecraft at the asteroid won’t be enough. “You’d have to push on it so hard that it would start to come apart,” Bruck Syal said.

Then people would consider blowing up the asteroid and scattering the fragments. Like in the movies, in a last-ditch effort, scientists might actually have to deploy nuclear weapons. “But the more warning time you have, the better,” she said.