Findings could also explain why they're invisible to night-vision goggles.
Image 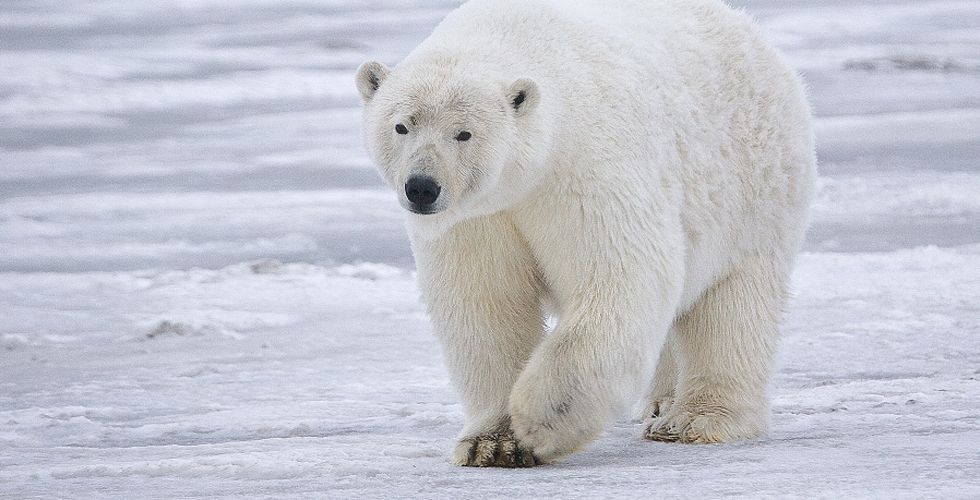 New calculations suggest polar bear fur might be so effective at trapping warmth because the hairs scatter infrared light.

(ISNS) -- A polar bear’s pelt seems simple. The white color serves as camouflage, and the dense fur acts as a fuzzy blanket, keeping the cold out and the warm in.

But how the coat insulates is surprisingly complex - and the subject of some debate. One suggestion, thoroughly debunked, posited that each hair served as a tiny heat pipeline, funneling the sun’s rays down to the skin like a fiber-optic cable. Scientists widely accept that warm coats (and fiberglass insulation) protect against the elements by trapping warm pockets of air in tiny pores. Now, it seems the pelt might have another way to insulate. Body heat that radiates from the bears’ skin as infrared light – the waves of warmth that night-vision goggles pick up –bounces around inside the coat, according to a paper in last month’s Optics Express.

The researchers created a computer model representing a stack of polar bear hairs, to investigate how bears and other arctic animals keep warm. At first, they considered the hairs as flat layers. Each layer was a “black body,” designed to perfectly absorb all wavelengths and then perfectly emit them. Solar panels are matte black in an effort to achieve this ideal absorption. They then calculated how infrared waves would move back and forth between the layers. The scientists then imagined that the layers were slightly transparent as is the case with polar bear coats, and recalculated. The layers of fur then acted as “gray bodies,” which neither scatter nor absorb light perfectly; instead, they do some of both.

“What is important is the number of hairs, and the density. The light will be reflected many times, and some will go back to the skin,” said Priscilla Simonis, a physicist at the University of Namur, in Belgium, and the lead author of the paper.

There are three types of heat transfer. One is conduction, the process by which heat moves between two connected surfaces, such as from a stove coil into a pot. The second is convection, the movement of heat by liquids and gases, like the water in the spaghetti pot circulating from the bottom to the top.

Most housing insulation capitalizes on these two types of heat, trapping hot air in a material that resists picking up heat through conduction, and keeping it in a small space so it doesn’t move as much. Scientists have long believed that animal coats do this, too.

But the last kind of heat, thermal radiation, is what Simonis and her team believe is most effective at keeping in heat. Radiation is energy released in electromagnetic waves - it’s how the sun warms your skin on a hot day. It’s also how the thin, shiny blankets in emergency kits work: as heat waves radiate from you, they hit the blanket and scatter without heading too far away, keeping heat in.

“When people tried to track polar bears from the air, they couldn't use visible photography, because you can't see them against the snow. Then they tried infrared, but they still blended in with the surroundings. The obvious conclusion is that the pelt is the same temperature as its surroundings,” said Daniel Koon, a physicist from St. Lawrence University, in New York. In his own research, he debunked the fiber-optic theory.

Every electromagnetic wave that hits a molecule is either absorbed and then radiated out again, or it ricochets. Polar bear fur both scatters and absorbs radiative heat. When heat is scattered, or absorbed and re-emitted, it tends to come off in random directions. The bears’ thick, dense fur has many of these stopping points on the way to the surface of the coat. Though the evolutionary basis is unclear, white coats take on double duty, both reflecting heat and blending in with the snow. Polar bears are camouflaged in visible light, too, of course. Sunlight scatters almost entirely off the fur. The sun doesn’t warm them, as scientists learned from disproving the cable-optic theory.

This initial study modeled only 100 hairs. The team has begun building more realistic models that can calculate 100,000 hairs in random positions, taking into account all three dimensions. But to model everything infrared radiation does when trying to escape a pelt will take the University of Namur’s supercomputers several months to calculate, Simonis said.

Polar bears aren’t the only animals this research applies to. Other arctic mammals, including foxes and rabbits, are likely using the same strategy. Birds, too, benefit from radiative insulation. There are also some interesting applications for building homes. “You can imagine a new type of insulating material,” Simonis said. “The more you reflect the [infrared] light, the more efficient the insulation.”