Scientists found that squirrels extract nitrogen from their urea to make proteins.
Image 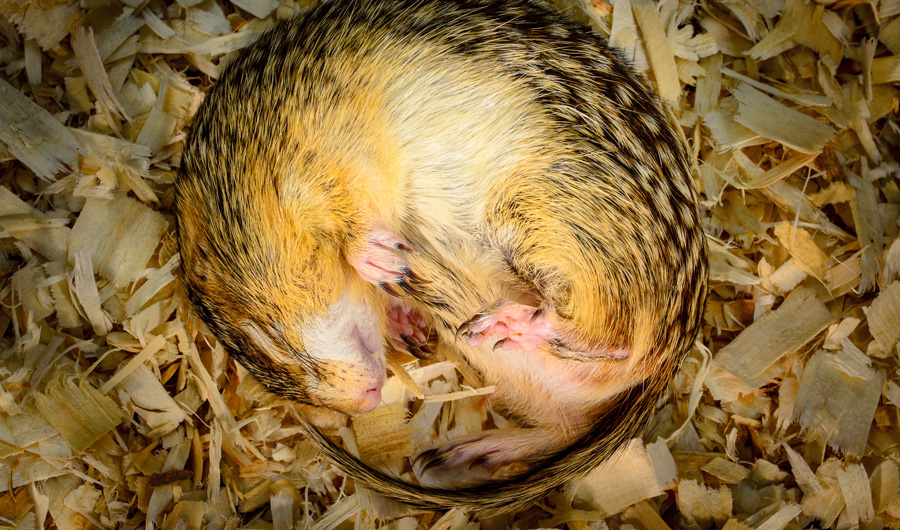 This image may be reproduced with this news story. It may not be modified or altered.

(Inside Science) -- Prolonged starvation and inactivity typically cause the bodies of mammals to lose muscle. Now scientists have discovered that the thirteen-lined ground squirrel (Ictidomys tridecemlineatus) escapes this fate during roughly six-month-long stints of hibernation with the help of microbes in its guts. These findings may one day help treat people with muscle atrophy, which can occur due to malnutrition, old age or even spending time in outer space.

Extended bouts of fasting and repose can cause mammals to break down muscle proteins for energy, ultimately generating nitrogen-loaded urea. Since urea is toxic in high concentrations, it normally gets excreted in urine.

It was a mystery why hibernators suffer remarkably little muscle atrophy while dormant. Since they are not eating or drinking anything while hibernating, they are not taking in nitrogen to replace any that researchers would expect them to lose in their urine. Nitrogen is a vital building block for proteins, so its loss would hamper any efforts to preserve muscle.

To help solve this puzzle, scientists injected about four dozen thirteen-lined ground squirrels with urea synthesized using the isotopes nitrogen-15 and carbon-13, atoms that each possess one more neutron in their nuclei than the more common isotopes nitrogen-14 and carbon-12. This difference in mass let the researchers track where the heavy isotopes went in the rodents using nuclear magnetic resonance imaging.

The scientists experimented with squirrels during both active and hibernating phases. They found that urea in these rodents was not just excreted in their urine, but also made its way into their guts, where microbes broke it apart. The nitrogen from this urea got incorporated into amino acids the squirrels reabsorbed, which they in turn recycled to help make proteins in the liver and muscles. This enables the rodents "to survive the long winter fast and be ready to begin the energy-intensive breeding season soon after emergence aboveground in the spring," said study co-senior author Hannah Carey, a physiologist at the University of Wisconsin–Madison.

These findings could one day help treat muscle loss in humans. "For example, malnutrition, which affects 805 million people globally, leads to a progressive decline in muscle mass," Carey said. In addition, she noted, the insights developed by studying hibernators might help understand and reduce the decline in muscle mass related to aging known as sarcopenia, and the reductions experienced by astronauts in microgravity.

It remains uncertain whether these findings may help scientists one day trigger hibernation states in humans -- for instance, on long-term missions to deep space, Carey said.

The scientists detailed their findings in the Jan. 28 issue of the journal Science.