The worms absorb and digest symbiotic bacteria through their skin.
Image 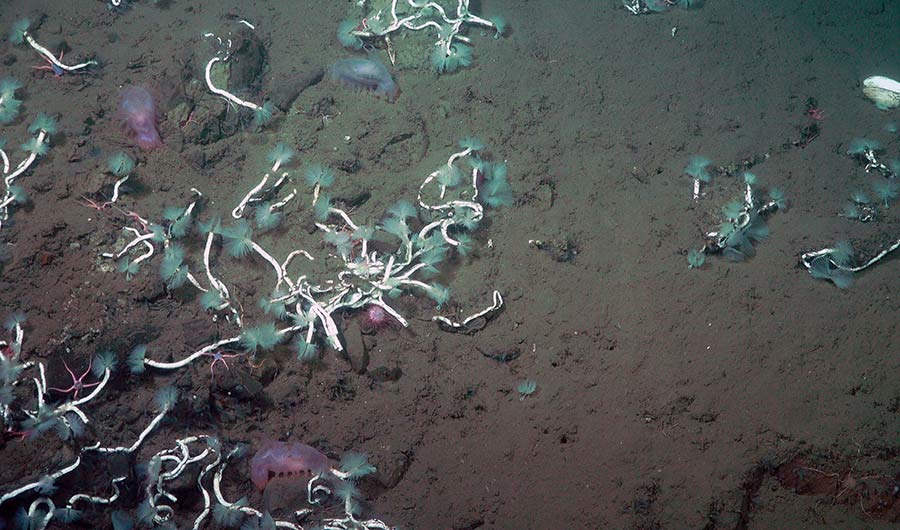 (Inside Science) -- When the researchers onboard the U.S. Navy-owned vessel Atlantis brought up a life-encrusted rock from the seafloor, they weren't looking for worms in particular. The 2-inch-long worms hiding in shell-like tubes were among the many things to pluck off, dissect and catalogue. But when Greg Rouse examined the worms' tightly curled tentacles with a microscope, he saw they had an unusual fluffy texture. The "fluff" turned out to be bacteria that break down methane for energy.

The researchers' mission was to learn about the biology, geology and chemistry of two Pacific Ocean "methane seeps" off the coast of Costa Rica, where methane naturally bubbles up from the seafloor more than 3,000 feet below the surface. Over the course of two expeditions in 2017 and 2018, they found that the sites are home to two new species of worms that both get their energy from methane-digesting bacteria. The new species don't yet have formal names, but they belong to the families Serpulidae and Sabellidae, groups known as "fan worms" and "feather duster worms," respectively, because their heads resemble tufts of ostrich feathers.

"They occur all over the world at different depths from intertidal to the deep sea. But never had such a symbiosis been hypothesized or known about," said Rouse, who is a marine biologist at the Scripps Institution of Oceanography at the University of California, San Diego.

Other types of Serpulid and Sabellid worms feed by collecting microbes and particles floating in the water and passing them through their digestive tracts. The newly discovered species have mouths and digestive tracts too. But the guts of the specimens the researchers examined were empty, suggesting that the worms mostly weren't using them. Moreover, the chemical signatures of the particles floating in the worms' habitat didn't match those of the worms' bodies, suggesting that the worms weren't relying on floating particles for food.

Under a microscope, the researchers could see that the worms were absorbing the bacteria through their skin and into their tissues. It looked like the embedded bacteria were being engulfed and dissolved by the worms' cells.

To find out if the worms really were feeding by sucking bacteria through their skins, the researchers housed live worms with their bacteria in containers filled with seawater. They then added methane containing high levels of the isotope C13, a rare form of carbon, to the water in the containers. After just 24 hours, the worms' tissues had elevated levels of C13. Animals can't break down methane on their own, so the C13 must have been processed first by the bacteria, which were in turn digested by the worms. The findings were published today in the journal Science Advances.

Maxim Rubin-Blum, a microbiologist at the Israel Oceanographic and Limnological Research Institute, who was not involved in the study, wrote in an email that he was "pleasantly surprised" to learn that the worms get their nutrition through partnerships with methane-digesting bacteria. Rubin-Blum and his colleagues have observed and collected similar worms at other methane seeps, but they didn't think to check for symbiotic bacteria, he added.

The worms most likely act like farmers, growing bacteria while harvesting enough for their own nourishment, said Victoria Orphan, a geobiologist at Caltech in Pasadena and one of the researchers who conducted the study. It's not yet clear how the worms help the bacteria grow, but Orphan speculates that their fluffy crowns provide a hospitable environment, waving through the water so the bacteria can collect methane.

Where surprises are expected

"The giant hydrothermal vent tube worms have no guts. Just a sack of bacteria. That's a clear clue that they're all-in on the symbiosis," said Orphan.

It's possible that the skin-colonization strategy represents an earlier phase in the evolution of this type of symbiosis, and the newly discovered worms will also someday lose their mouths and guts and have bacteria living inside them, said Nicole Dubilier, a marine symbiosis researcher at the Max Planck Institute for Marine Microbiology in Germany. On the other hand, she said, it's possible the newly discovered worms will remain relatively unchanged for millions of years. They may be using their digestive tracts to supplement their diets or to survive difficult circumstances. Dubilier was not involved in the project, although before the coronavirus pandemic struck, she had been planning to conduct follow-up work with one of the researchers on the study, Shana Goffredi of Occidental College in Los Angeles.

The worms' lifestyle could have implications for conservation. The U.S. and U.N. have regulations and guidelines about mining and fossil fuel extraction in certain parts of the ocean, including methane seep ecosystems. The boundaries used for seep ecosystems are based on where methane-dependent creatures are living, according to Orphan and Goffredi. Until now, it wasn't clear that Serpulid and Sabellid worms were among those methane-dependent creatures. The worms' colonies extend farther from methane sources than other seep-associated organisms, which could mean that the protected areas need to be revisited and expanded, said Orphan.

"We know we can't stop exploitation of the deep sea, but we certainly can help inform the way it's done to try and minimize the damage," said Orphan.

Methane seeps and other deep sea ecosystems are still not well understood because they are so hard to get to. There is so much to discover that what you find largely depends on factors such as who is on the research vessel. "You have somebody who's really interested in snails, you're likely to find a new snail species," said Orphan.

That's why it was so fortunate that the research vessel Atlantis had worm experts like Goffredi and Rouse onboard, Orphan added. Otherwise, the team likely wouldn't have noticed there was anything unusual about the worms carpeting their research site.

"We have a tendency to overlook animals that we think we understand," said Goffredi.