Not So Neat: Why You Should Add Water to Your Whiskey 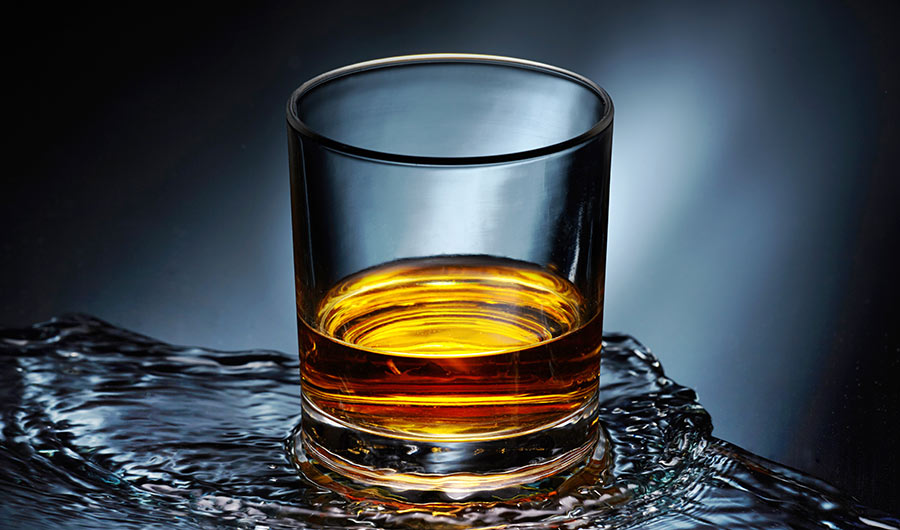 (Inside Science) -- Many whiskey drinkers know the trick: add a small amount of water to your liquor to improve its aroma and flavor. It's counterintuitive, though, since water usually dilutes the taste of food and drink. But researchers from Sweden now say they can explain why it works in liquor.

"People claim that's when you get a dramatic change in the taste and smell of whiskey," said Björn Karlsson, a chemist at Linnaeus University in Kalmar, Sweden.

If that's not enough, some whiskey drinkers add another splash of water into their glass before sipping. According to connoisseurs, adding water opens up the drink, giving it fuller, more complex flavors.

Whiskey is indeed a complex liquid. While water and alcohol, namely ethanol, are the primary components, there are hundreds -- if not thousands -- of other chemical compounds that give whiskey its range of tastes and aromas. And the factors that affect those flavors -- such as dilution -- are complicated.

Whiskeys often contain molecules called fatty acid esters, and the addition of water causes those molecules to clump together into spheres called micelles. Scientists have hypothesized that the round chemical structures change the flavor because they trap certain flavor compounds, preventing them from evaporating and reaching the smell receptors in your nose or touching the taste receptors on your tongue. By masking these compounds, extra water changes the flavor of the whiskey.

But Karlsson wasn't convinced. Many kinds of whiskeys don't have enough fatty acid esters to form micelles, he said.

Curious for a better explanation, he and Ran Friedman, another chemist at Linnaeus University, used a computer to model the behavior of whiskey at the molecular level. They simulated what happens when you mix 5,000 molecules of water and ethanol at different proportions. To represent a flavor compound, they also threw in a single molecule called guaiacol, which is associated with whiskey's characteristic smoky flavor.

Because guaiacol and ethanol share similar properties, they associate with each other. Both molecules have one part that's attracted to water and another part that's repelled by it. So to avoid contact with water, ethanol gathers at the surface -- and so does guaiacol. At the surface, the guaiacol is more likely to touch your tongue or evaporate into your nose.

Diluting whiskey, then, may simply make flavor compounds like guaiacol more readily available to be sniffed, sipped and savored.

This explanation, published today in the journal Scientific Reports, seems more likely than the micelle hypothesis, Karlsson said. And for whiskey drinkers, the takeaway is clear: "It seems like a good idea to add water to your whiskey," he said. "It will improve its taste and smell."

But because whiskey is so chemically complex, it's likely that this is one of multiple reasons why dilution enhances flavor, said Eric Simanek, a chemist at Texas Christian University in Fort Worth and co-author of Shots of Knowledge: The Science of Whiskey.

And while the researchers simulated a wide range of dilution levels, it doesn't explain the effect of adding a tiny amount of water, as some whiskey aficionados do. "What the paper doesn't address is this phenomenon when you add just a single drop -- the slightest dilutions and the impact that has on flavor and perception," Simanek said.

Still, he noted, the new work adds invaluable insight to understanding whiskey. "It's a new way to look at the whole problem," he said. "I find it delightful."