New research shows how decommissioned oil rigs can become home to an abundance of fish and invertebrates.
Image 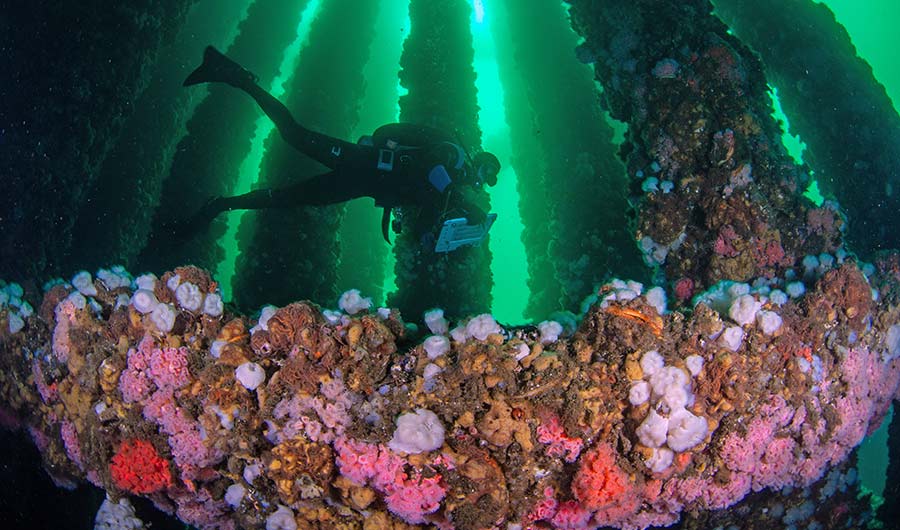 (Inside Science) -- Off the coast of Southern California, a herd of aging oil rigs has an uncertain future. After about three to five decades of pumping oil, the rigs are set to be decommissioned -- but what to do with them after that? New research shows one potential solution: Let the rigs remain in place to become artificial reef habitats for marine life. It could be a possibility for the 7,500 offshore oil platforms around the globe.

Each platform is different, so it can be challenging to make general statements about the ways they impact the environment, said Milton Love, a research biologist at the University of California, Santa Barbara’s Marine Science Institute, who has spent three decades assessing the impact of oil rigs on species living nearby.

Love and his colleague Ann Scarborough Bull, an environmental researcher at the University of California, Santa Barbara, published a review of rigs-to-reefs research in February in the journal Ocean and Coastal Management. They have both worked in fish counting surveys, where divers descend between the surface and 100 feet, following a set path to count and estimate the length of every fish within two meters of themselves. Below that depth, the researchers used a two-person submarine to do a similar task: Go to the bottom -- sometimes 1,200 feet down -- and travel out on the sea floor up to 40 feet from the platform to count all the fish and estimate their size.

The method has been vetted over and over, and Love describes it as the "platinum standard" for doing fish surveys. But it's actually an underestimate, since the divers only look at what's outside the structure, added Bull. “It’s a very conservative count,” she said. “We know there are fish inside but we don’t count them.”

Surprisingly, researchers have found that fish are even more abundant on platforms than on natural reefs nearby, likely because there tends to be less fishing around the oil rigs. “It’s basically like a marine protected area,” said Bull. Along with juvenile fish, there is an abundance of invertebrates living on the platform -- the steel is typically teeming with creatures like mussels, corals, oysters, crabs and shrimps. All that life squeezed onto the steel beams makes the structure slower to rust, adding to its longevity.

The level of productivity of these artificial habitats came as a shock to the researchers themselves. In 2014, they were part of a team that found that oil platforms off the California coast were among the most productive fish habitats anywhere in the world -- including mangroves and coral reefs. Love recalls the four authors sitting around during a meeting when they calculated the results: “We looked at each other and went, what?” So they went back and ran the numbers again, only to come to the same conclusion.

People have been creating reefs for millennia: Artificial reefs were built from wood by Persians and Romans to block the entrance to harbors during wars. There are plenty of more recent examples as well. In 1994, 100 M-60 tanks sunk in the Gulf of Mexico off the coast of Alabama, and in 1999, the Louisiana Artificial Reef Program created the world's largest artificial reef from the Freeport sulfur mine off Grand Isle, Louisiana. One retired rig off the coast of Borneo has even become a new hotel, with four-day dive packages starting at $819.

Opponents of the rigs-to-reefs idea say that the fossil-fuel dredging platforms could leach toxic substances into the water and should be removed -- and that oil companies are getting away with leaving detritus in the ocean. But others, including Bull, say that once the platforms are part of a functioning system, it’s wise to consider how they impact their surroundings: “If the platform is completely removed, you’re also removing all that habitat.” Of course, habitat isn’t the only consideration. Platforms impact species on the soft sea floor and they can lower nonfish biodiversity.

Most federal and state laws require the complete removal of the platforms after they’ve been decommissioned, but states are typically allowed to make their own decisions. In the Gulf of Mexico, states from Texas to Alabama have adapted 500 platforms into artificial reefs. Energy companies usually remove the upper 85 feet of the platform, which stick out above the water, and recycle it or place it in the water next to the bottom part. California may soon have a big choice to make, as 27 platforms are nearing the end of their working lives. “These decisions are no longer in the future -- they’re happening now,” said Bull.