309 million years ago an animal that resembled a lizard wrapped its tail around a younger member of its species. 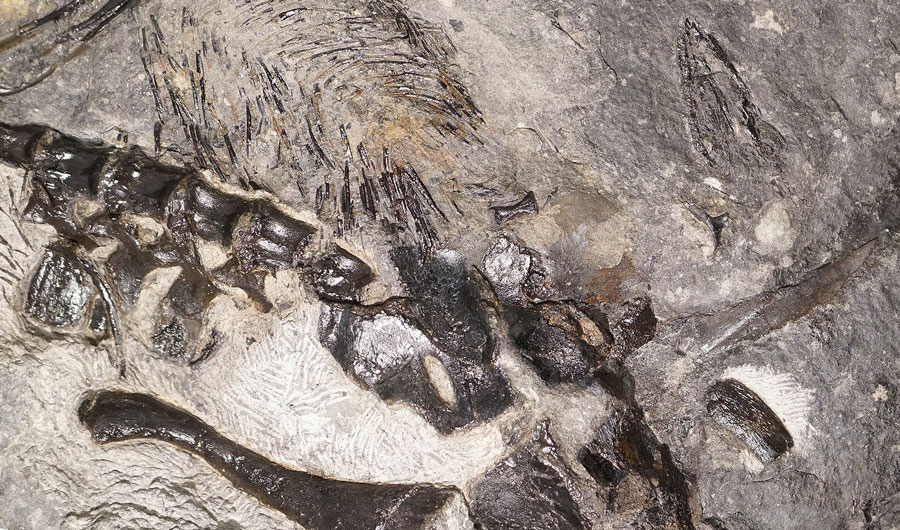 (Inside Science) -- Bones of a reptile-like beast curled around a younger member of its species may be the most ancient fossil evidence yet of a parent taking care of its progeny after birth, a new study finds.

Parental care of offspring after birth, also known as prolonged parental care, is common among many vertebrates today, including birds, reptiles, fish and amphibians and especially mammals, but is absent in other groups. Analyzing the evolution of this behavior is challenging because it is rare to find the remains of parents and infants preserved together. Previous research suggested the earliest example of prolonged parental care involved South African fossils from the extinct animals known as varanopids. These particular fossils of creatures resembling modern-day monitor lizards were more than 260 million years old.

In 2017, the researchers discovered the partial skeletons of an adult and juvenile of a different type of varanopid preserved together in a petrified wood stump in the cliffs along the coast of Cape Breton Island in Nova Scotia, Canada. They named the species Dendromaia unamakiensis -- Dendromaia meaning "tree mother" in Greek and unamakiensis referring to the name for Cape Breton Island in the local Mi'kmaq language.

The fossils came from a rock formation dated roughly 309 million years old. "This species could have been around 20 to 30 centimeters from the tip of snout to the base of tail," said study lead author Hillary Maddin, a vertebrate paleontologist at Carleton University in Ottawa, Canada. They each also likely had a long tail, "but we can't tell how long it is in our specimens," she noted.

The researchers suggested a concealed area within the stump might have served as the pair's den. The way the juvenile was positioned behind the adult's hind leg and encircled by its tail suggested a protective relationship between parent and offspring.

These findings suggest prolonged parental care began at least 40 million years earlier than scientists previously had fossil evidence of, not that long after a few pioneering fish left the water to colonize land about 350 million to 400 million years ago. "To me this suggests that evolution in terrestrial communities was proceeding at a much faster rate than we thought before," Maddin said.

Protests, A Retracted Paper, and a Super-Earth Planet
Why Is an Empty Shampoo Bottle So Easy To Knock Over?
COVID-19 Vaccine, Monkeys and Bumblebees
Smart Speakers Could Detect Cardiac Arrest
Light And Art Come Together
END_OF_DOCUMENT_TOKEN_TO_BE_REPLACED