In Ethiopia, churches may hold the key to protecting threatened species. 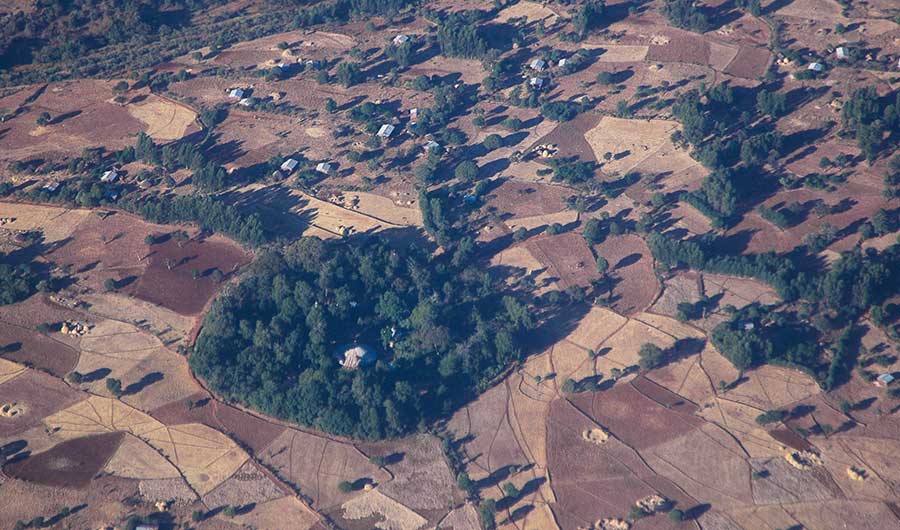 (Inside Science) -- In the highlands of Ethiopia, California Academy of Sciences ecologist Meg Lowman and local forest ecologist Alemayehu Wassie have formed an unconventional partnership with local churches to protect the biodiversity of the country's ancient forests.

In 2008, Wassie won an annual student prize from the international scientific society the Association for Tropical Biology and Conservation for his work documenting the threatened tree species in Ethiopia, which live in the small patches of forest that surround churches. When Lowman asked him what was next, his worried reply, “I’m the only person in the world working on this,” moved her to form a partnership with him. Lowman, affectionately known as Canopy Meg by friends and colleagues alike, now works with Wassie to safeguard the remaining native forests of Ethiopia, one church at a time. 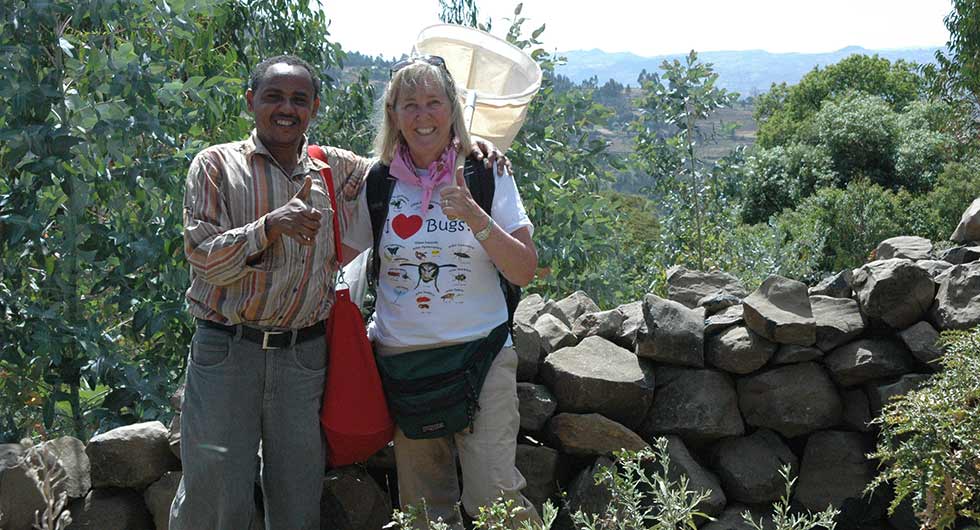 In northern Ethiopia, the sun beats down on a harsh landscape dominated by deserts and mountains. There is barely a tree in sight. Much of the native forest has been cleared to make room for subsistence farming. Only small patches of forest remain. They stand out as pockets of green among a vast barren landscape.

“It is interesting to see a forest in a landscape without trees,” said forest researcher Raf Aerts, from the University of Leuven in Belgium, who uses satellite imagery to study the forests. From above, the forests look like green dots set in a mosaic of brown farm fields and patches of desert. But look closer, and they all have something in common. Near the center of each forest is an Ethiopian Orthodox church.

The churches are built from large logs and locally harvested stones. Unlike ornate churches with gold leaf and stained glass, these churches are adorned with a necklace of trees, shrubs and even sacred springs. Some have existed for generations, so long it is unclear when they were first built. The encircling “church forests” have been preserved by priests and congregations as a natural sanctuary, an extension of the place of worship. They believe the church is the caretaker of all God’s creatures and the forest should be revered and cared for.

Little by little, the sacred groves are shrinking. Agricultural fields expand to feed the mouths of the growing population. Cattle nibble at seedlings along the forests' edges. And passers-by scavenge for kindling and building materials -- whittling down the remaining forests at their edges.

No one can be certain how much forest existed in the past because there is no systematic and rigorous documentation of it. Oral tradition indicates that 40-50 percent of the northern half of Ethiopia was forested. Aerts believes that the “highlands were once covered in forests, a dominance of trees.” Today, less than 5 percent of the highlands remains forested.

In the late 1800s, locals began planting eucalyptus trees to re-forest the barren landscape. Commonly called gum trees and native to Australia, they are a fast-growing solution to local needs for timber and construction wood. But without any natural pests or predators, the eucalyptus trees spread quickly and began outcompeting the native species. What’s more, eucalyptus trees use more water and are less hospitable to insects and animals. The priests call them "evil trees" because they suck the land dry without providing a suitable home to other creatures. In contrast, the native forest has adapted over time to be best suited for the ecosystem. It also provides Ethiopians with food, medicine, and even dyes and paints.

Aerts combined data from both European and Ethiopian scientists to create a comprehensive picture of indigenous tree, shrub and woody plant diversity in the roughly 78 forests that they've catalogued. They found that each individual forest is species-poor, containing only about 25 species of the 148 total species they recorded across all forests.

“This means that every forest is very valuable,” he said. “If we lose a few of these forests, chances are high that species will go extinct as well.” 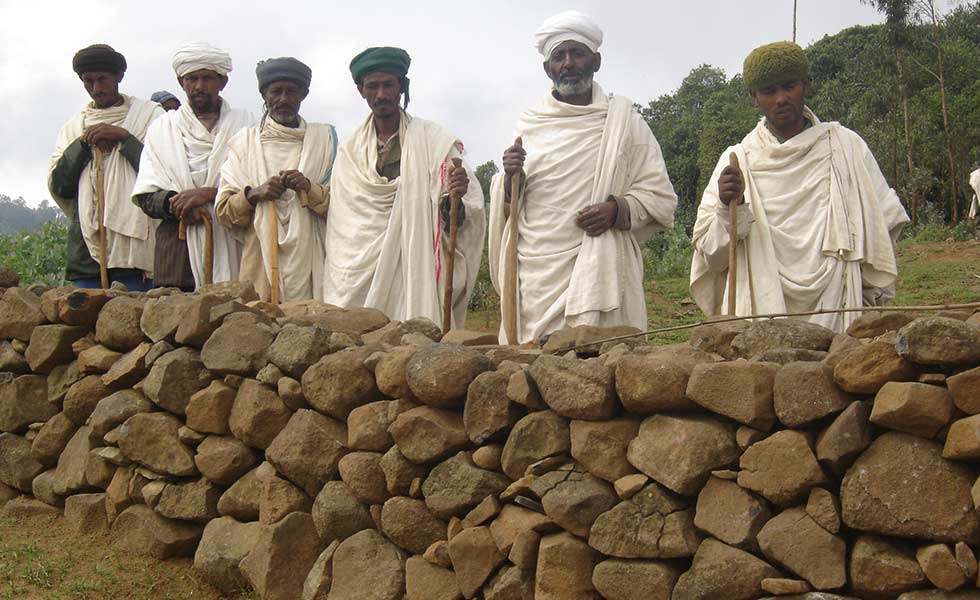 Church members built this wall around the forest that surrounds their church in Ethiopia.

That’s where Lowman and Wassie come in. “If we make a stone wall around the church forests, then we can give the seedlings a chance to grow,” said Wassie.

Wassie and Lowman collaborate with priests and villagers to build stone walls around the church forests, demarcating the property lines. One-by-one they collect the stones from the agriculture fields, transport them on the backs of donkeys and then stack them on the hand-built walls. The priests see it as a way to honor the church.

But for Wassie, a native Ethiopian who once studied to be a priest, it isn’t all canonical. “My professional point of view as a forest ecologist is that the church forests are the primary avenue to conserve the native forests,” he said. “This is the place where I should begin. This is the last opportunity to conserve biodiversity in Ethiopia.”

The walls help keep the grazing cattle out of the forests. They also remind people not to down a few trees here and there for kindling or building materials.

Lowman said building trust with community members is critical to their success. Sometimes her work may even include ceremony and prayer, a departure from the typical work of an American scientist.

Of the 19,000 church forests Lowman and Wassie counted, which include many also counted by Aerts, they are focusing their efforts on 28 forests. These forests were selected because they have the highest biodiversity. Lowman and Wassie hope to preserve them as “genetic libraries,” by building walls around what remains of the forest. These species-rich locations may hold the key to the future of Ethiopia’s forests. Within the 14 forests they have already surrounded with stone walls, the scientists see signs of success: Seedlings are coming up. There are more amphibians like lizards and frogs living within the walls. People respect the boundaries and even proudly consider the walls as an enhancement and honor to the church.

“No one goes against the church. It is more powerful than government,” said Lowman.

Peter Klepeis, a professor of geography at Colgate University, who has also studied the church forests, thinks Lowman and Wassie are on the right track by engaging the local community in protecting the forest. He said the U.S.'s “park model” can exclude people without addressing their needs. “Frame the protection in the context of local values,” he suggested.

Science and spirituality partner for conservation

Sacred forests aren’t unique to Ethiopia. According to Martin Palmer, the secretary general of the U.K.-based Alliance of Religions and Conservation (ARC), 70 percent of all national parks in the world, which were largely created in the last 100 years, were at one time considered sacred places, and many still hold that honor. “This is why there is something left worth protecting,” he said, “The flora and fauna was better protected in those areas than anywhere else.”

Gretchen Daily, co-founder of the U.S.-based Natural Capital Project, added that decision-makers should also consider economic and quality of life factors. For example, while a stand of trees could provide wood fuel to a community for a year, if left alone its water-filtering properties could supply clean drinking water for much longer. The most successful conservation models, she said, are based on a shared community value, as opposed to monetary gains. “It not about just what makes life physically possible, but also what makes life fulfilling and meaningful,” she said.

In contrast with the U.S., where there can be a cultural tension between religious and environmental groups, the ARC’s partners are realizing that religious groups can be allies in conservation efforts. Enthusiasm for some conservation trends may be a passing fad, but religious beliefs are more perennial.

“If [people] believe a mountain is sacred,” said Palmer, “they will protect it for the next 1,000 years.”

Lowman is planning to return to Ethiopia next month to help the country's only women’s monastery build a wall around their forest. She continually strives to bridge the gap between the academic and cultural aspects of her work. Because of Ethiopia’s oral tradition and absence of scientific tools like computers, it lacks rigorous statistics that support conservation efforts like Lowman’s. When scientists and conservationists ask, “Where is the data?” Lowman is armed with her go-to reply. “In the number of prayers,” she says.

Researchers Study Violinists To Learn How Humans Act in Synchrony
Alligators May Be Able to Survive Venomous Snake Bites
New Theory Says We’ve Been Wrong About How Bubbles Pop
Crustacean Genes May Solve Debate Over How Insects Evolved to Fly
Some Beetles Survive Being Eaten, New Study Finds
END_OF_DOCUMENT_TOKEN_TO_BE_REPLACED

COVID-19 Vaccine, Sharks and Mezcal
Crabs Use Belly Sounds To Communicate
Touring The Trinity Test Site
Protests, A Retracted Paper, and a Super-Earth Planet
Why Is an Empty Shampoo Bottle So Easy To Knock Over?
END_OF_DOCUMENT_TOKEN_TO_BE_REPLACED