A new material will allow for improved ultrasound imaging. 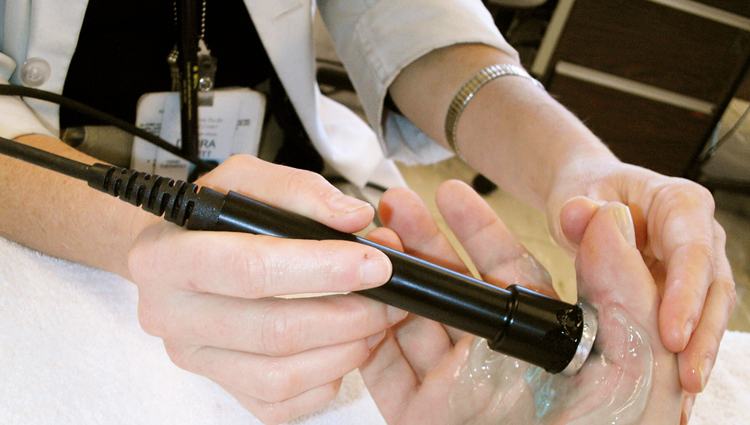 WASHINGTON (ISNS) -- Most roads allow cars to flow in both directions. However, in some circumstances, such as congested city streets, it makes sense to limit traffic to one direction only. With electricity it is also useful to "rectify"currents -- that is, make them move in one direction -- using things called diodes. One-way electricity is handy since it enables transistors to be turned on and off, among other things.
Making sound waves go in one direction only has been more difficult because of the way sound waves move through a material. Sound consists of push-pull disturbances that first compress atoms or molecules, whether they are in a solid or even a gas like air, and then let them decompress. The disturbance acts along the direction the sound is moving.
But now for the first time, a rectifier for sound has been created at last, by scientists at Nanjing University in China. Their acoustic rectifier works on sound waves that are moving through water and was created by using two different parts.
The first part is a special material -- a liquid filled with microscopic bubbles -- in which sound waves entering at a particular frequency (pulsations per second) leave with a frequency twice as great. The second part consists of a sandwich-like layering of alternating thin slabs of glass and slabs of water which acts like a filter that only allows the sound waves with the doubled frequency to pass through the material but not the original sound waves.
Now, turn the rectifier around and sound waves with the original frequency do not flow through the filter at all -- so no sound gets through. In effect, the combination of the doubling part plus the filter part acts like a one-way gate for sound waves.
So why are acoustic rectifiers potentially useful? After all, when a band plays music, a listener wants the sound to be able to come and go since many musical effects depend on simultaneously hearing both the initial wave of sound as well as the reflected sound waves.
Music is one thing, but imaging is another.
In sonogram imaging -- the method often used for imaging a fetus -- sound waves are sent into the body. Reflected waves bounce back to the scanning instrument and the surrounding sensors, forming the image displayed on-screen. However, some of the reflecting waves interfere with the ingoing waves, lowering the brightness and the resolution of the image. Keeping waves from coming back toward the ultrasound source would help to keep the image strong and sharp.
"This design offers design possibilities for manipulating acoustic energy to make one-way mirrors for protecting ultrasound sources from being disturbed by backtracking sound waves," said Jianchun Cheng, one of the Nanjing researchers. "It can also serve as a sonic barrier for blocking environmental noise in a single direction."
Cheng and his colleagues published details of their acoustic rectifier in the Oct. 24 issue of the journal Nature Materials.
Xiang Zhang, an expert on manipulating sound waves who was not involved with the Nanjing work, said that their work is "a significant step in demonstrating an acoustic diode concept by using a bubble suspension. Given more engineering optimization, such a one-way acoustic mirror may find some interesting applications in more effective medical ultrasound therapy and high resolution imaging by rejecting the back-scattered waves."
Zhang, a distinguished scientist and engineer at the University of California at Berkeley, published a paper of his own in the Nov. 8 journal Nature Physics about how to improve the sharpness of acoustic imaging using special "metamaterials" bored through with a honeycomb pattern of empty spaces. Normally the sharpness of an image is no better than about the wavelength of the wave being used to form the image. But in Zhang's acoustic device, which he developed along with Francisco Garcia-Vidal at the Universidad Autonoma de Madrid in Spain, the image sharpness is about 50 times finer than the size of the incoming sound waves.