By wearing different self-folding exoskeletons, a robot can move, roll, float and glide. 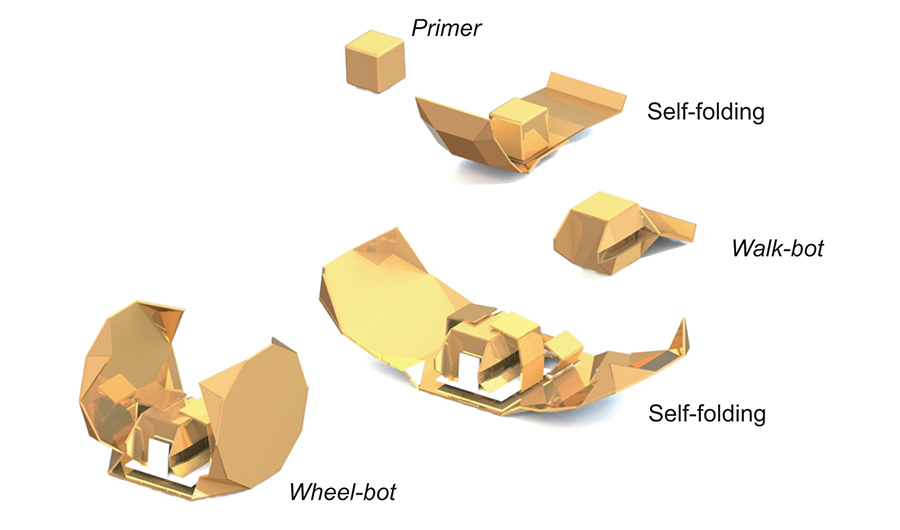 (Inside Science) -- When unadorned, the robot is but a tiny, tumbling, magnetic cube. But wrap it in a self-folding polymer and Mylar sheet, and it transforms. Donning this origami exoskeleton, the 1/8-inch robot becomes bigger and more powerful, now smoothly scooting around.

Layering on another exoskeleton gives it wheels. A different one turns it into a boat. Yet another one gives it wings that carry it through the air.

"Robots are generally pretty inflexible, since most of the time, each of their parts has a fixed structure and a single defined purpose," said Shuhei Miyashita, a roboticist at York University in the U.K., in an email.

But this kind of origami-inspired transforming robot, which he developed with a team at the Massachusetts Institute of Technology, can switch body types -- and thus functions -- simply by changing outfits.

"It's exciting to imagine robots as a kind of Swiss-army knife that could be used for a range of tasks depending on the different accessories it has," Miyashita wrote. "This could one day have applications in many different areas, from deep-sea construction to disaster-relief operations."

The new robotic system, described today in the journal Science Robotics, is currently restricted to operating atop a raised platform about 10 inches across. Underneath, electromagnets steer the cube, rolling it around like a remote-controlled die. Using the magnets, the researchers drive the cube, dubbed Primer, toward a plastic sheet sitting on a heated pad.

Once the cube settles in place, the heat triggers the sheet to fold by itself along pre-designed creases and envelop the cube. The sheet forms a stabilizing structure that helps the robot move around as magnetic fields propel it forward. This mode, called walk-bot, can then scamper over to another sheet that, depending on its fold design, turns it into a bigger walk-bot, a floating boat, a wheeled vehicle, or a glider -- all still driven with magnetic fields. When the glider is nudged off a ramp, it can soar for more than 4 feet before gently landing on the ground below. To get out of the second exoskeleton, the robot scurries into a pool of water nearby, which dissolves the small arms that hold the outer sheet to the walk-bot.

The magnetic cube Primer is moved by a magnetic field to a sheet of origami that folds around it, “transforming” it into a walking bot. These sheets can be layered on top of one another. Primer then submerges itself in water to molt its “shell.” [Credit: Miyashita et al., Sci. Robot. 2, eaao4369 (2017)]

"Having a transforming robot has been a goal that's been in science fiction for a while, and practically speaking, it's very advantageous because you can have a robot that transforms into something well-suited for a task," said Cindy Sung, a roboticist at the University of Pennsylvania.

She wasn't involved in the new research, but, as a graduate student at MIT, she helped design an earlier incarnation of the robot, which starts as a flat sheet and folds into forms that can traverse both land and water. What's new now, she said, is the ability to transform via exoskeletons.

One advantage of self-folding robots is that they can squeeze through tinier openings. And because they start out flat, they're easier to manufacture, given the range of well-established techniques to make 2-D sheets, such as laser cutting, laminating and etching.

In principle, origami exoskeletons could be used in robots of all sizes for any number of applications, including for ferrying heavy gear across a river, Miyashita said. Instead of a cube, the Primer that wears the exoskeletons could be almost anything, like a protein, a cell, an electric motor or even an engine.

But because the current system is relatively constrained, relying on an external magnetic field, heating pads and a pool of water for releasing the exoskeletons, it may be a while before engineers design origami exoskeletons with such a broad range of practical uses. In the nearer future, however, it could be used for minimally invasive medical procedures.

The MIT team has previously shown, using an artificial stomach, how a tiny robot could dislodge a watch battery that someone had swallowed. A second, self-folding robot could then unfold, cover the wound, and apply a drug. A patient would have to swallow the tiny robot, packaged inside a pill made of ice, which a doctor could then control using a magnetic field. Using exoskeletons, a single robot could potentially accomplish multiple, similar tasks inside the body.

"The most direct application would be in biomedicine," Sung said. "I'm not really seeing this system being used in the outside world because you need this magnetic field."

Michael Tolley, a roboticist at the University of California, San Diego, who has previously collaborated with the MIT team, agrees. The magnetic platform could be adapted for a biomedical application, he said, but it's hard to imagine how the robot could be controlled without the platform.

Still, he said, the new robot is a good proof-of-principle. "It's really nice work."

Protests, A Retracted Paper, and a Super-Earth Planet
Why Is an Empty Shampoo Bottle So Easy To Knock Over?
COVID-19 Vaccine, Monkeys and Bumblebees
Smart Speakers Could Detect Cardiac Arrest
Light And Art Come Together
END_OF_DOCUMENT_TOKEN_TO_BE_REPLACED