Researchers find that membranes may have helped the building blocks of life come together.
Image 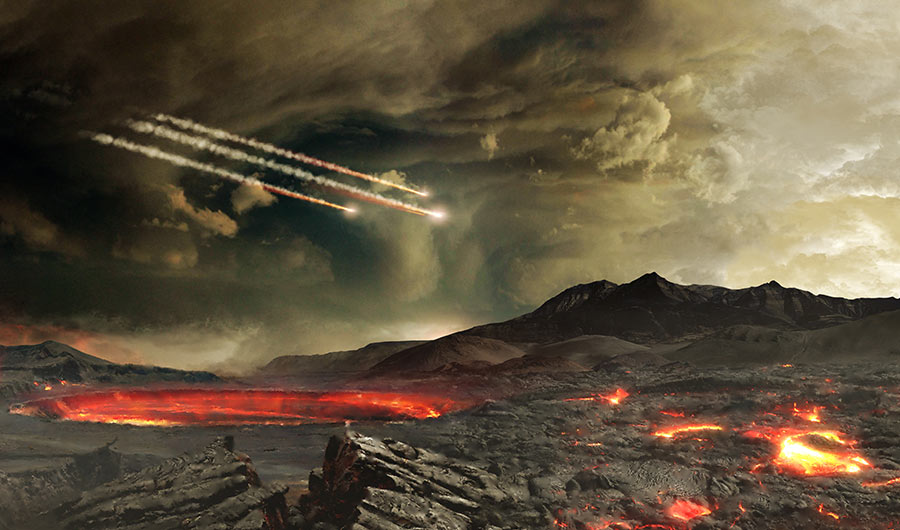 (Inside Science) -- Experts believe the building blocks of life first bumped into each other about 3.5 billion years ago. This serendipitous collision somehow helped form the first rudimentary cell -- and the first life on Earth.

At least, that's been the predominant theory. Now, a team of scientists from the University of Washington is challenging this idea in a paper published in the journal Proceedings of the National Academy of Sciences. They propose that membranes might have been the key component that helped congregate the pieces needed to create the first cell.

"If you want to explain life, you have to explain the origin of cells," said Roy Black, co-author of the paper and biochemist at the University of Washington in Seattle. "What this [research] does is help us to explain how cells arose, not just the separate components."

It takes three main parts to build a primitive cell: RNA to store information, proteins to perform the daily tasks of life, and a cell membrane to keep everything in the same place.

But there's a problem. Creating RNA produces charged molecules of magnesium, which can cause membranes to collapse. Scientists hadn't been able to re-create an environment that could have arisen from the materials present on early Earth and allowed RNA and membranes to coexist. It's been a huge problem for scientists trying to understand how life began on our planet.

The researchers started by constructing an environment in the lab that mimics what scientists believe the Earth was like billions of years ago. They tried to solve this puzzle using only pieces available on Earth at that time: water, primitive protein bits, pieces of RNA and fatty acids, which could have been carried to Earth by a meteorite.

The team added various molecules to their simplified primordial soup and looked for combinations that would allow membranes to form. In the water, fatty acids will self-assemble into membranes, forming structures like a full water balloon underwater.

But these structures are unstable. They collapse easily if the water around them contains salts, like in the oceans that covered early Earth, or charged molecules, including the magnesium that is required to make new RNA.

"What we found is that the building blocks of proteins save the day," said Sarah Keller, co-author and biological physicist at the University of Washington.

The team noticed that some protein pieces, called amino acids, stick to membranes. They had previously reported a similar phenomenon using the building blocks of RNA. Caitlin Cornell, first author on the paper and a graduate student at the University of Washington, noticed that the membranes looked thicker and brighter under the microscope when she added certain amino acids. Sometimes they formed concentric membranes, like the layers of an onion.

This indicated that the amino acids can help stabilize the membranes. The researchers were surprised and excited to find that the membranes remained intact even when they added salt or magnesium.

For Antonio Lazcano Araujo, biochemist at the National Autonomous University of Mexico who was not involved in the study, that the researchers could add magnesium without the membranes falling apart is particularly exciting. He says it hints at a way that all of the components for early life could have coexisted in the same microenvironment. "It's a much more realistic model of what happened on primitive Earth," said Lazcano Araujo.

Some scientists think that the three components of RNA, proteins and fatty acids formed independently before coming together to form the first cell, perhaps near hydrothermal vents in the ocean or in puddles on land. But getting the right pieces into the right places at the right time to form early life seems so improbable.

The team speculates that membranes may have facilitated this unlikely process. Amino acids and pieces of RNA naturally stick to cell membranes made of fatty acids, which would concentrate all of the pieces in the same place. "Then you're poised for the chemistry to start happening, to put the building blocks together," said Black.

These findings are a step toward knowing how life began, but there is still so much we don't know about how we -- and all life -- came to exist on this planet.

"Questions that allow us to think about our place in the universe -- whether from astronomical scales of planets in the universe to smaller scales of ourselves on this planet -- are big, interesting questions," said Keller.