New form of matter fills in a decades-old gap in theoretical physics. 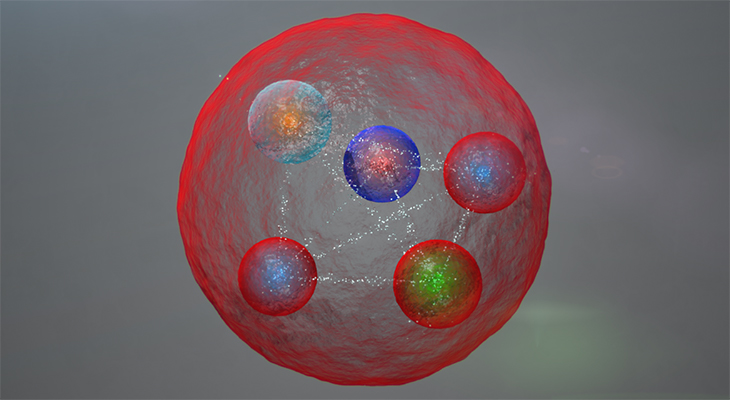 (Inside Science Currents Blog) – One week ago, an international team of scientists announced that they had discovered the pentaquark, an exotic, short-lived chunk of matter that had long eluded researchers. Its serendipitous discovery fills in one of the remaining gaps in the Standard Model, the prevailing but incomplete theory of particle physics, and it potentially points the way to weird “subatomic molecules” and other exotic forms of matter.

While finding the particle hinged on a stroke of good fortune, the discovery marks another milestone for CERN’s Large Hadron Collider (LHC), the world’s largest and most powerful particle collider. “It’s better to be lucky than good, but it’s really good to be both good and lucky,” said Sheldon Stone, a physicist at Syracuse University in New York and co-author of the recent study, which was submitted to Physical Review Letters.

The pentaquark fits into scientists’ ever-better understanding of the universe’s menagerie of particles. With names such as kaons, psions and charmonium, they may sound as if they power comic book villains’ doomsday devices. But physicists have figured out that many of these are composed of building blocks called quarks. Quarks come in six different “flavors,” or types: up and down; top and bottom; and charm and strange.

When these quarks buddy up, usually in groups of two or three, they give rise to the bigger subatomic particles we see in nature. Protons, for example, are each made of two up quarks and one down quark. But why stop there? When the physicist Murray Gell-Mann first theorized quarks’ existence in 1964, he suggested that arbitrarily large numbers of them could coalesce to form bigger particles. Theoretically, there wasn’t a reason why there couldn’t be four-quark “tetraquarks” – or five-quark “pentaquarks,” for that matter. So ever since, scientists have been on the hunt, hoping to temporarily prod tetraquarks and pentaquarks into existence with increasingly powerful particle colliders like the LHC.

Scientists had a devilishly hard time finding these particles, even though they likely exist in high-energy settings, like dying stars collapsing to form black holes – or the moments just after the Big Bang. In 2013, tetraquarks were convincingly unmasked by two research teams. The pentaquark, however, has been a brutal tease. In 2003, a team presented tentative evidence for pentaquarks at an experiment in Japan, but efforts to prove that they saw them haven’t fully panned out. After an initial flurry of other sightings, more sophisticated attempts to replicate all these earlier results came up empty, and the earlier discoveries remain mired in controversy.

Ultimately, it would take a stroke of luck for Stone and his colleagues to nail down the pentaquark, once and for all. “It was a complete accident,” Stone said. “It found us.”

As a part of another experiment in 2013, Stone and his colleagues were trying to study the rote behavior of the “bottom lambda baryon,” a three-quark particle. Like many particles, bottom lambda baryons are quite unstable. Once they’re formed, they quickly “decay,” spewing showers of other particles as they break down. At first, the researchers simply planned to track what the bottom lambda baryon was throwing off and how, just to improve the baseline understanding of how it acted. “A graduate student complained about this: ‘Let’s just get this done,’” Stone said. “And then he looked at [the data] and came back with a big smile on his face.”

Bilas Kanti Pal, the student in question, had noticed something odd. The researchers’ detector had picked up a short-lived particle about four to five times more massive than a proton. In fact, the data implied an unexpected culprit: a pentaquark containing a proton’s three quarks, along with a charm quark and a charm antiquark. At first, they tried to downplay their results.

“We really had the prejudice that pentaquarks were fakes and that nobody would believe it,” said Stone. But six months of intensive analysis later, they found that their data showed not just one, but two different pentaquarks, each with masses about four and a half times higher than a proton’s. Each pentaquark’s mass is boosted by the comparatively heavy charm quark-antiquark pair, and by the high-energy interactions among the five quarks. The fact that there were two different pentaquarks buried in the data surprised Stone. It’s one thing to stumble across the pentaquark after a 50-year search; it’s quite another to find two different pentaquarks at once when you do.

Significant questions remain. For one, both pentaquarks have the same five building blocks, but different internal structures. However, the specifics of each pentaquark’s structure are still unclear. The pentaquarks’ five quarks could be tightly bound together, or they could be in a “molecular state,” a weirdly loose union analogous to atoms’ arrangement in molecules.

Two possible structures of the recently discovered pentaquarks: a tightly bound version in which all five quarks are "in the same bag" (left), or a "subatomic molecule" (right). (Daniel Dominguez, CERN)

“What they [seem to have found] here is a particle that’s part of the time made of three quarks and a pair,” Gell-Mann said in a statement from the Santa Fe Institute. These two units may "rotate" around one another, making a pentaquark act like a “subatomic molecule,” but until further experiments, scientists won’t know for sure.

It’s unclear if there are other pentaquarks made of different quarks and antiquarks, or even larger composite particles made of more than five quarks. What is certain, though, is that the two discovered pentaquarks are probably the easiest of the bunch to find. Both pentaquarks’ charm quark-antiquark pairs have considerable mass, which might delay their decay and make them easier to detect. The pentaquark possibly sighted in the Japan experiment, on the other hand, didn’t have charm quarks, which may have made it less stable – and less likely to form. However, Stone cautions that this idea hasn’t yet been confirmed.

The newly upgraded LHC is now about twice as powerful as it was in 2013, when it produced the team's original data. The higher-energy instrument could be an even more effective pentaquark hunter for Stone and his colleagues to deploy in their research into these rarely seen particles.

Editor's note: This article has been corrected to clarify the publication status of the researchers' paper.

Why Training with Heavier or Lighter Baseballs Could Help Pitchers Throw Faster
Fossil Bite Marks Show Some Dinosaurs Ate Their Own
Royal Jelly Does Not A Queen Make
What Does the Spiny Lobster Sound Like? Loud.
Tyrannosaurs' Long Legs May Have Been for Marathons, Not Sprints
END_OF_DOCUMENT_TOKEN_TO_BE_REPLACED