These significant advancements could win the Nobel Prizes in Physiology or Medicine, Physics, and Chemistry.
Image 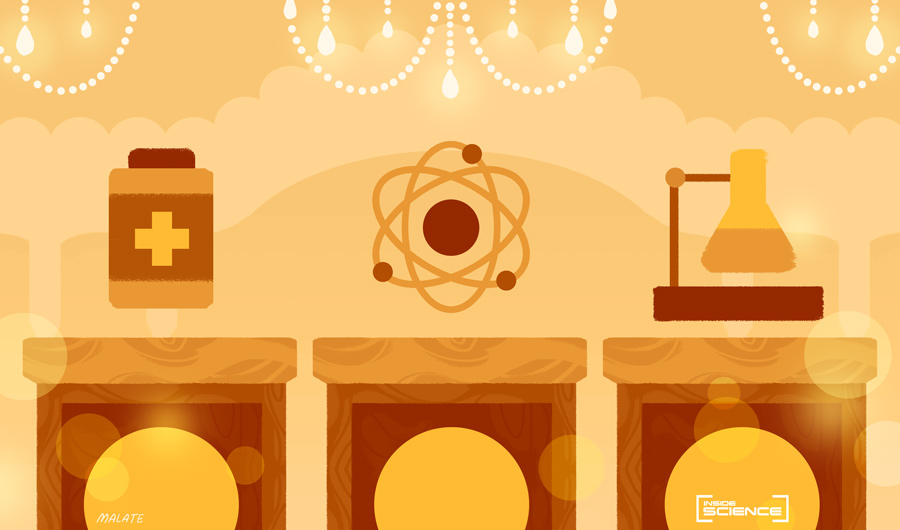 (Inside Science) -- Every year, the Nobel Prizes in Physiology or Medicine, Physics, and Chemistry honor great advances and discoveries in science. Writers from Inside Science have summarized some of the top contenders for these famous science prizes.

The Nobel Prize in Physiology or Medicine -- Announced October 1

A few decades ago, researchers gave little thought to the microbes in our bodies unless they caused disease. But the bacteria, viruses and fungi of the human microbiome are increasingly viewed as an organ in their own right, given that they perform many crucial roles to keep our bodies healthy.

Key advances in this field came from the lab of Jeffrey Gordon at Washington University in St. Louis. In 1996, Gordon and his then-graduate student Lynn Bry showed that mice need microbes in their guts to produce produce certain types of complex carbohydrates important for mouse health.  A decade later, Gordon's team showed that lean mice and obese mice have important differences in their gut microbes. Microbe-free mice that receive transplants of gut microbes from fat mice tend to get fat, while mice that receive microbes from lean donors tend to stay thin -- even when they consume the same amount of food.

Such discoveries have led to advances in human medicine, from a greater appreciation of the risks of antibiotics to "fecal transplant" procedures that can cure devastating gastrointestinal illnesses. Gordon is sometimes called "the father of the microbiome," and his name has been floated as a potential Nobel Prize contender since at least 2015.

An estimated 15-20 percent of human cancer cases are caused by viruses -- particles that stitch their own genetic material into their host's genome. In 1994, Yuan Chang and Patrick Moore, a wife-and-husband team at the University of Pittsburgh, discovered an important cancer-causing virus using an innovative trick. Instead of looking for viral particles, they subtracted a normal human genome from that of a cancer cell. What remained was the genome of a virus called human herpesvirus 8.

Human herpesivirus 8 is usually suppressed by the immune system. But in people who are immunocompromised, it can cause cellular changes such as promoting growth and shutting down natural cell death, increasing the risk that infected cells will turn cancerous. The virus causes three types of cancer, including Kaposi sarcoma, the most common cancer in people with HIV/AIDS. Kaposi sarcoma is more widespread in some African countries than prostate cancer is in the U.S.

Chang and Moore used a similar approach to identify another cancer-causing virus called Merkel cell polyomavirus in 2008. Their work has earned them several prestigious prizes and tens of thousands of citations, spurring speculation about a potential Nobel in their future.

Cancer Drugs that Take the Brakes off the Immune System

The human immune system naturally seeks out and destroys cells that mutate into cancerous forms. But cancers find sneaky ways of fighting back, hiding from immune cells or subverting them to protect the cancer instead.

Checkpoint inhibitors can have significant side effects, but they are proving effective, even against some late-stage cancers that were formerly untreatable. Their developers include James Allison of the University of Texas MD Anderson Cancer Center, who has won more than a dozen awards. Still, the Nobel team may be reluctant to honor immune system-related cancer therapy this year, given that the 2011 prize in Physiology or Medicine was awarded partly for the development of cancer vaccines.

Testing Spooky Action at a Distance

Almost one year ago, Chinese researchers placed the first quantum-encrypted video call. This year's Nobel Prize in Physics may go to scientists whose experiments helped test a phenomenon that made the call possible -- quantum entanglement.

When particles are entangled, their states are linked, even if they are separated by millions of miles. This can have some bizarre implications in the quantum world, since quantum states aren't set in stone. Depending on when you measure them, you might get different results. So, the act of measuring a property of a quantum entangled particle seems to instantaneously affect the state of its partner. Einstein famously called this "spooky action at a distance," and he didn't like it.

In 1964 the physicist John Bell proposed a way to test if "spooky action" was real. Over the ensuing decades, scientists conducted increasingly rigorous tests of the so-called Bell's inequality.

In 2010, the scientists Alain Aspect, John Clauser and Anton Zeilinger won the Wolf Prize in Physics, sometimes considered a predictor of the Nobel prize, for their work in this field. And in 2015 scientists announced they had finally conducted a "loophole free" test of Bell's inequality, showing yet again the weirdness of quantum entangled systems is likely here to stay.

Harnessing the Power of the Sun

Every hour, the sun bathes the Earth in enough energy to power humanity for a year. Perovskite solar cells may help harvest more of that carbon-free solar power.

Perovskite is a mineral first discovered in the 19th century in the Ural Mountains of Russia and named after Russian mineralogist Lev Perovski. Perovskites are a class of materials -- some synthetic -- that share the same crystal structure. The idea of using perovskites in a solar cell was first demonstrated in 2009 by Tsutomu Miyasaka of Toin University of Yokohama, Japan and his colleagues. At first, the efficiency was a woeful 3.8 percent. But it has since shot up above 20 percent, rivaling the performance of traditional silicon solar cells.

Pervoskite solar cells have many advantages: They are relatively cheap to manufacture, can absorb energy across all the visible wavelengths of sunlight and can be sprayed or painted onto myriad surfaces.

Yet challenges remain. Small test cells need to be scaled up. Heat and moisture can break down the material in the cells and many perovskites contain lead, a toxic metal. But if researchers can address these downsides, the future for this up-and-coming technology looks bright.

The technological nature of these advances may be a disadvantage in the eyes of a Nobel committee that often recognizes fundamental science discoveries. However, a past energy innovation -- the blue light LED -- was awarded the physics prize in 2014.

Light travels a zippy 186,000 miles per second in a vacuum. But in recent decades scientists have used exotic materials to slow it to less than the speed of a pedestrian, and in some instances stopped it completely.

In 1999, researchers at Harvard University led by Danish physicist Lene Hau slowed light to a mere 38 miles per hour by sending it through a gas of sodium atoms cooled to just a few billionths of a degree above absolute zero. At such a cold temperature, the atoms form an exotic state of matter called a Bose-Einstein condensate, whose optical properties, the researchers found, could be manipulated with a control laser.

Later experiments slowed the light even further and in 2001, the researchers stopped it completely for about a millisecond. In 2013, scientists in Germany stopped light for a full minute inside a crystal. These experiments are more than just physics parlor tricks. Manipulating light in this way may one day lead to better computers and communications networks.

Since Hau is one of the pioneers of slow and stopped light experiments, recognizing her with a Nobel Prize this year could break the more than 50-year spell of male only physics laureates.

Will This be CRISPR’s Year?

In recent years, the creators of the gene editing technology called CRISPR’s have been on the shortlist of potential Nobel Prize recipients. This year is no different. The technique uses molecular tools borrowed from bacteria to cut and paste fragments of DNA into an organism’s genome. The implications are vast: Scientists suggest that it could be used to snip away genetic diseases like Huntington’s, bolster vulnerable crops' resistance to climate change, and even create ultra-fuzzy cashmere goats. Some, however, are concerned that the technology could lead to ethical dilemmas involving designer babies and the revival of extinct species.

And CRISPR can’t cut genes without controversy: Several competing scientists claim to have developed the technology. Jennifer Doudna, a biochemist at the University of California, Berkeley, and Emmanuelle Charpentier, a biochemist at the Max Planck Institute for Infection Biology in Berlin, Germany, recently lost the latest round in a bitter patent dispute against the biochemist Feng Zhang of the Broad Institute of Harvard and MIT, both in Cambridge, Massachusetts.

The Power of Portability: Lithium-ion Batteries

These batteries power the world but haven’t yet earned their inventors a Nobel Prize. Found in everything from smartphones to electric vehicles, lithium-ion batteries paved the way for an increasingly mobile world.

Inside a battery, electrically-charged atoms, called ions, travel along a pathway between two electrodes, creating an electrical current. In one of the most commonly used iterations of the lithium-ion battery, one of the electrodes, the lithium-filled cathode, is composed of cobalt oxide while the anode is made of carbon. At the time of its discovery, it was a perfect pairing: the batteries were compact, stable and stored more energy than other batteries of the same size. The first commercial lithium-ion battery went on the market in 1991, but more efficient and safer designs are being tested every day.

Stanley Whittingham of Binghamton University (SUNY) in New York drafted the initial designs for the lithium-based battery, while John B. Goodenough of the University of Texas at Austin and Akira Yoshino of the Asahi Kasei Corporation and Meijo University in Nagoya, Japan are largely credited with making the innovation safer and easier to use. All three would be likely candidates for the prize, should the technology finally be recognized.

Clicking on a Possible Repeat Winner

In 2001, K. Barry Sharpless of The Scripps Research Institute won the Nobel Prize in Chemistry for "chirally catalyzed oxidation reactions." As the sole science writer at the institute, it fell to me to quickly write a press release and help explain his prize-winning work on asymmetric catalysis to reporters. I rolled into work that morning as TV, radio and newspaper journalists from New York to San Diego were scrambling for interviews, and my boss had scheduled a press conference for less than an hour later.

Thankfully I had great help from a young researcher working in Sharpless' lab named Valery Fokin (now at the University of Southern California). He skillfully explained to me the science of asymmetric catalysis and then rapidly reviewed and artfully corrected what I wrote about the breakthrough, a way of synthesizing chemical compounds in a selective way. Rather than winding up with a mix of right- and left-handed molecules (which can be harmful, like Thalidomide), asymmetric catalysis selectively makes one or the other.

That same year, Sharpless coined the term "click chemistry" to describe another breakthrough in synthetic chemistry, which he pioneered with Fokin and former Scripps Research professor M.G. Finn, who is now at Georgia Tech. In the last few years, click chemistry has been named a Nobel contender, and Sharpless, Fokin and Finn have been included on short lists of potential winners.

Click chemistry is the stuff synthetic dreams are made of. It's a simple, rapid way of doing asymmetric catalysis reactions in a single vessel with high yield and doing it in such a way that the byproducts are benign or easy to purify out. These are important considerations in drug design, one major challenge of which is to develop synthetic processes to make small molecule drugs at industrial scales.

If Sharpless wins again this year, he would be one of only a handful of people to win two Nobels. And if Fokin shares the prize, I will be calling him again -- this time for an interview of my own! 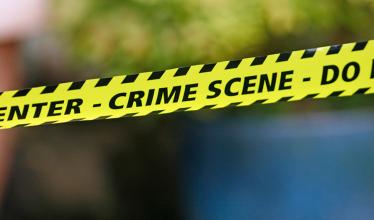 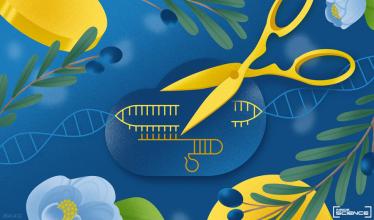