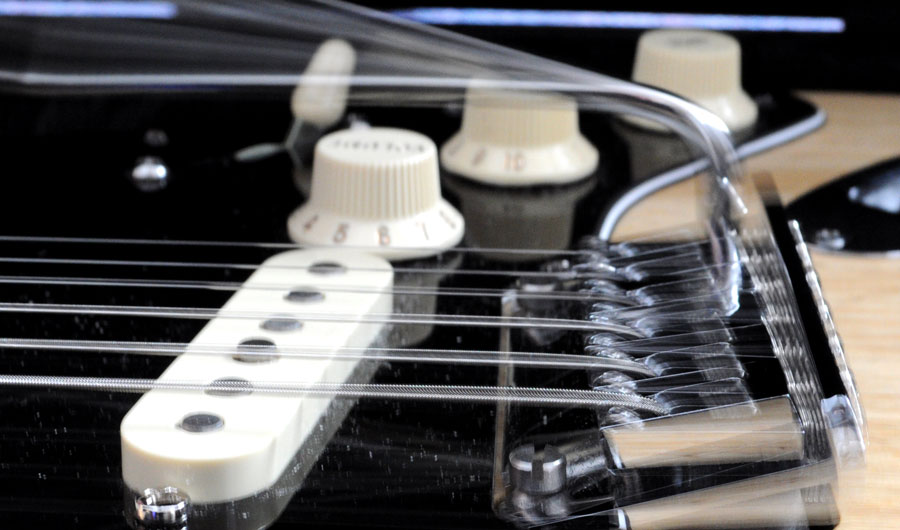 Jonathan A. Kemp/University of St. Andrews

Authorized news organizations may publish this photograph with this Inside Science story.

(Inside Science) -- The leverlike guitar accessory known as a whammy bar is best used to bend and distort a single note -- think Jimi Hendrix's famous rendition of the Star Spangled Banner from Woodstock 1969. But it doesn't sound very nice if used when playing multiple strings simultaneously, such as when strumming a chord. To solve this problem, a researcher from the U.K. has engineered new guitar strings that respond tunefully and as a group when you use a whammy bar.

The problem with the whammy bar is caused by physics. The guitarist's skill doesn't matter, whether you're a teenager just picking up guitar for the first time or Jeff Beck.

Each of a typical electric guitar's six strings is built differently. The lower-pitched ones are typically thicker and heavier than the higher-pitched ones. While it is theoretically possible to just make the lower strings thicker, this would make the strings too stiff to be played comfortably. For this reason, manufacturers add extra weight to the lower strings by winding a coil over an inner metal core. This technique affects the string's pitch and also changes other physical properties of the string, among them the amount of pitch change when you bend the string with a whammy bar.

Even though a whammy bar stretches or loosens all six strings by the same amount, the amount of pitch change for each of the strings is different. So, playing a chord and then bending it changes the relationship of the notes. It won't sound pretty.

There is a fix, but it's expensive. TransTrem is a series of guitars specifically built for the purpose of uniform pitch changes across multiple guitar strings. According to Kemp, it uses "a very specific bit of hardware" in the bridge of the guitar, such that each string is attached at a different pivot angle. This causes each string to stretch by a different amount when the whammy bar is used, matching each other for a uniform amount of pitch change. Eddie Van Halen has one, and so does David Gilmour. All things considered, the ingenious engineering of TransTrem works quite well, but there is one problem. Even a used one costs at least $1,000. 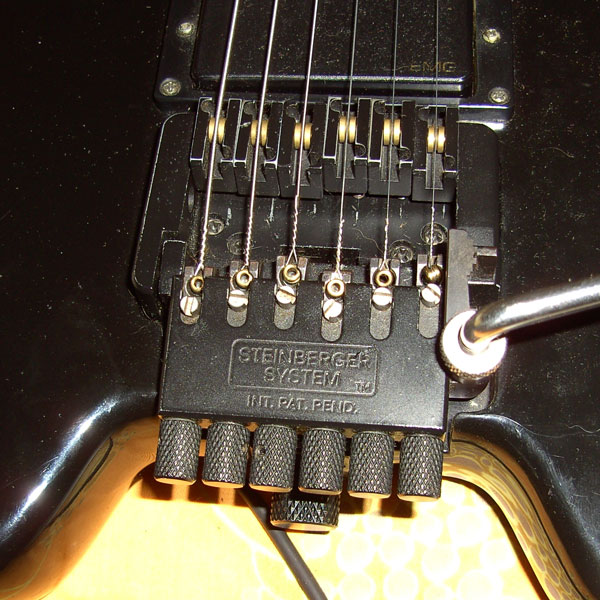 The bridge of a TransTrem guitar

Inspired by TransTrem, Jonathan Kemp, a physicist and musician from the University of St. Andrews in Scotland, decided to try to engineer guitar strings themselves to overcome the whammy bar disaccord problem. If he can make a set of guitar strings that all change pitches by the same amount when uniformly stretched, then he can essentially make a TransTrem out of a Fender Stratocaster, which can be found at almost every pawn shop for as little as $200.

According to Kemp's paper published in the journal PLOS One, the secret lies in the thickness ratio between the core and winding of the guitar strings. He collaborated with a small British string manufacturer called Newtone Strings and had several strings constructed with different core-to-winding ratios. After experimenting with the strings, Kemp discovered and published the mathematical relationship between a string's core-to-winding ratio and its pitch-to-stretch sensitivity.

"I haven't noticed that much difference in the feel of the strings -- they actually feel pretty similar to ordinary strings -- but I really began to notice the difference when I used the whammy bar," said Mark McGuigan, a guitar teacher and reviewer. "You can actually change the pitch by a lot more using an effects pedal -- by a fifth or even octaves -- but there're still little sonic flaws here and there that are noticeable, because it's a digital effect. This just sounds a lot more natural."

Beyond the whammy bar, the new strings also have a more uniform sensitivity to temperature changes -- because they all change pitch by the same amount. This can come in handy for an acoustic guitarist busking outside during Christmas or an upright bassist playing jazz next to a fireplace.

With the long road of international patent processing ahead, Kemp said that he has not yet developed a plan to make the strings commercially available. In the meantime, don't let that stop you from rocking out on the whammy bar. After all, Jimi Hendrix did it in 1969. As Frank Zappa sang in his 1979 hit "Joe's Garage" -- all you need is "a Stratocaster with a whammy bar!"