The Physics of Ice Bridges

The Physics of Ice Bridges

A new model describes how floating ice can get jammed in a narrow strait, creating a giant frozen walkway. 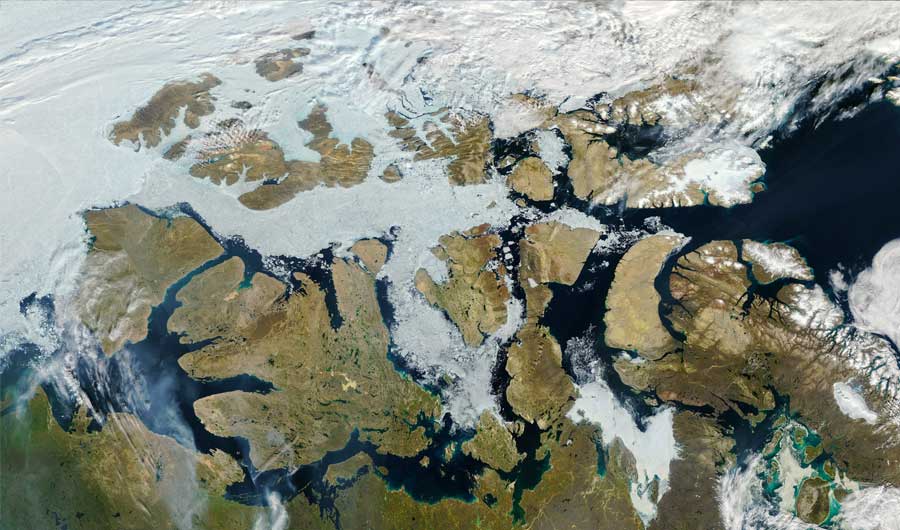 (Inside Science) -- As nights lengthen with the coming of arctic winter, one can sometimes walk across water -- on natural, frozen bridges. Wind and waves can drive sea ice together to form giant superstructures of ice stretching miles longer than any bridges that people have built over water. Now scientists have developed models describing how these ice bridges form and break up, findings that could shed light on a variety of seemingly unrelated phenomena, including jamming in grain silos that can lead to explosions.

Ice bridges are massive, stationary, rigid structures that can form when chunks of floating ice get stuck as they flow through narrow straits. These frozen formations can last for months, and can get "quite wide -- about 50 kilometers," said study senior author Howard Stone, a fluid dynamicist at Princeton University in New Jersey.

Ice bridges form seasonally in many of the straits and channels in the Canadian Arctic Archipelago, and can impact climate on a global scale by preventing the flow and loss of ice into warmer oceans. Moreover, regions free of ice cover known as polynyas that form downstream of ice bridges "are crucial in supporting marine ecosystems," Stone said.

"For marine mammals and sea birds, polynyas are true oases," explained Dany Dumont, a physical oceanographer at the University of Quebec at Rimouski. At polynyas, light can penetrate the ocean, triggering the growth of photosynthetic phytoplankton that feed the rest of the food chain, Dumont said.

Despite the important role that ice bridges can play in climate and ecology, their formation and breakup was poorly understood and difficult to predict. Now scientists have developed a theoretical framework describing the physics of these massive ice structures, yielding insights into how they emerge and disperse.

"The model adapts ideas traditionally used to study liquids at small scales -- usually smaller than a centimeter -- to a much larger scale phenomenon in a completely different setting," Stone said.

The new model analyzes how the flow of sea ice through a narrow channel might form an ice bridge. The motion of the ice is driven mostly by wind on its top surface, while resistance against this flow is due primarily to the thickness and density of the ice field and the width of the channel.

Once ice bridges form, they freeze into solid sheets over the winter months. They ultimately break up due to a combination of stresses from the wind and the weakening of the bridges at the beginning of summer due to melting, the researchers said.

Stone noted that ice bridges appear to break up in very different ways than ice shelves breaking apart in the Arctic and Antarctic. Unlike ice bridges, "ice shelf break up seems to occur by fracture processes that do not involve mechanical forcing by winds or currents," he said.

Instead, the researchers noted their work could help shed light on all kinds of jamming. "Jamming of grains is a common concern that can generate a large amount of heat and in some cases cause explosions," and "river ice jams regularly cause flooding that causes damage to life and property," Stone said. "Our study describes a way to understand and potentially control these processes."

Future research can incorporate seasonal changes into the model "to assess the long-term stability of ice bridges," Stone said. Sea ice specialist Jennifer Hutchings at Oregon State University in Corvallis, who did not take part in this research, said that such work could help see if ice bridges "will become less prevalent in the future based on projections of ice drift and thickness."

Validating this model against real-life data will prove challenging because "the environment is so variable and difficult to measure that theoretical refinements can't go beyond what's achieved here," said Dumont, who did not participate in this study. Still, future research could test the model with small-scale experiments, such as in the long, narrow inlets of fjords, Dumont said.

The scientists detailed their findings in a paper accepted by the journal Physical Review Letters.