Plants may recruit defenders by bribing them with other plants' pollen.
Image 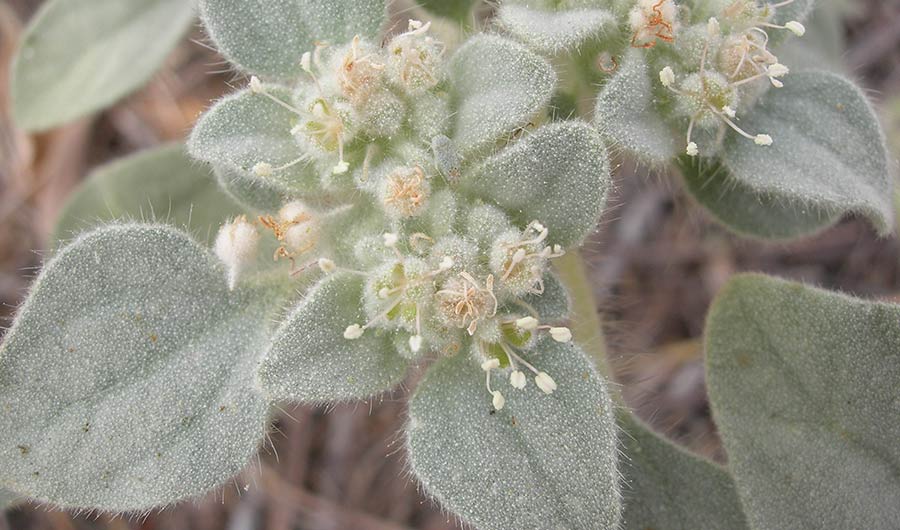 A plant-eating insect called a cotton fleahopper is camouflaged on this turkey mullein plant. Research suggests the plant's hairs trap pollen, and the pollen attracts predators that defend the plant against enemies like fleahoppers.

(Inside Science) -- With its gently domed shape and fuzzy, rounded leaves, the plant known as turkey mullein doesn't look like a Machiavellian schemer. But those fuzzy hairs may be part of a ploy to defend against plant-eating insects, according to a new study.

The researchers found that turkey mullein hairs collect pollen from many kinds of plants, trapping it from the wind and brushing it off the legs of passing bees. Pollen is high in protein, and it serves as a supplemental food for various predatory insects and spiders. The researchers guessed that such predators would be attracted to the pollen on turkey mullein plants, and once on the plant, they would kill or scare away plant-eating insects such as cotton fleahoppers and caterpillars.

To see if such a scheme might work, the researchers applied extra pollen to turkey mullein growing wild in California. Compared to plants that didn't receive extra pollen, the pollen-dusted plants suffered about 60% less damage from herbivores. They also had significantly more predators. The greatest difference was seen in spiders, which were approximately twice as abundant on the pollen-dusted plants. The findings are published in this month's issue of the journal Ecology.

Hairs on plants serve many purposes, from protection against dryness or cold to preventing insects from biting leaves. The new findings suggest that in addition to these functions, some plants' hairs might have evolved to trap pollen as a bribe for predators, according to Jennifer Van Wyk, an ecologist at the University of Massachusetts Amherst and one of the study's authors.

The pollen-bribe strategy is just the latest example of plants recruiting other species as defenders. Some plants have sticky secretions that trap small insects, creating a gooey graveyard that attracts predatory insects. In cotton plants, susceptibility to aphids may actually be an advantage, since aphids attract fire ants that defend against more harmful herbivores such as caterpillars. Acacia trees have symbiotic relationships with other types of ants, which live in the acacias' hollow thorns and fight off even large animals such as goats.

"It's astonishing how many different anti-herbivory defenses plants can have," said Van Wyk. "It's so cool what plants do, and we just don't give them the credit for it."