Portman's Role In 'Thor' Highlights Rise Of Women In Astronomy

No longer banned from using telescopes, women are ascending in stellar studies.
Image 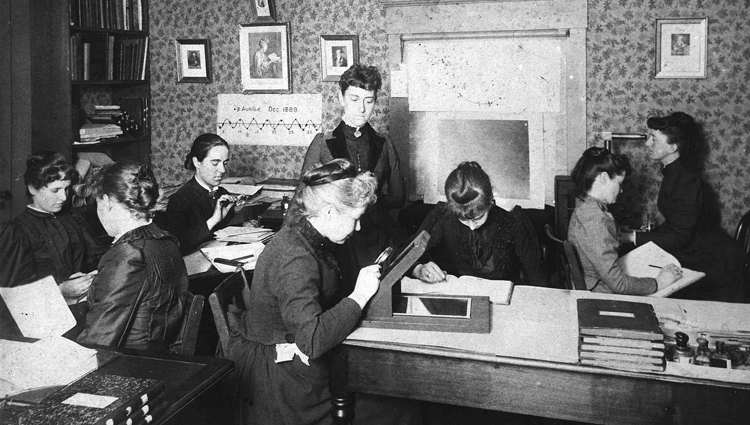 (Inside Science) -- Natalie Portman plays an astrophysicist in the recently released movie "Thor," but she is hardly the first Hollywood actress in a leading role as an astronomer.

There were other woman scientist actresses prior to Portman's role in "Thor." Comet-observing Darryl Hannah in the film "Roxanne," and alien-searching Jodie Foster in "Contact," but their star turns as astronomers mirror recent progress in the scientific profession itself. Once, women were scarce in astronomy, and confined to low-status, poorly-compensated positions. But their numbers have grown in recent decades, and they've begun to attain important positions and achieve well-deserved scientific recognition.

Henrietta Leavitt of the Harvard College Observatory is the classic example of a woman astronomer achieving renown despite the gender discrimination of her time. In the early 1900s, she was employed at the observatory as a "computer" assigned to the repetitive work of measuring photographic records of thousands of star images on telescopic photographs that were made by male astronomers. She was paid just 30 cents per hour for the seemingly routine task, but she discovered an unexpected trend in the data, which would enable astronomers to measure the distances of faraway galaxies. The finding, sometimes called Leavitt's law, was used by Edwin Hubble to analyze his own telescopic observations and thereby make his famous 1929 discovery that the universe is expanding.

Hubble worked with the 100-inch diameter reflector in California on Mount Wilson, where women astronomers were unwelcome. After World War II -- when the 200-inch telescope on Palomar Mountain succeeded the Mount Wilson instrument as the largest telescope in the world -- women observers again were banned.  The "telescope-glass ceiling" wasn't broken until the mid-1960s. The first woman invited to observe at Palomar, Vera Rubin, went on to collect convincing evidence (at other observatories) for one of the most important breakthroughs in modern cosmology: the existence of the still-unexplained "dark matter" that abounds throughout the universe.

More than 40 years have passed since Rubin's famous discovery. Now in her early 80s, she remains an active researcher, and women now have regular access to the instruments of forefront research.

"Opportunities for women in astronomy are continuing to increase," said Wendy Freedman, who led a Hubble Space Telescope project investigating the age of the universe from 1991-2001, and current director for the Carnegie Observatories -- where Edwin Hubble did his notable work. "Women can even now be directors of major observatories."

The observatories have changed names a few times since Hubble's era, but did not have a female post-doctoral researcher until 1979. Now that young trailblazer, Debra Elmegreen, is an endowed professor at Vassar College and President of the 7500-member American Astronomical Society. She serves on high-level government advisory committees, has presented congressional testimony, and even met with the pope.

Elmegreen said that she "was the only female astrophysics major" in her undergraduate class, and first woman to graduate with that major at Princeton University, which itself began admitting women only a few years before her arrival. Assessing current progress for women astronomers, she said, "... the main thing is that with a higher proportion of women entering the field, more and more are rising to prominence, occupying more positions formerly held almost exclusively by men, and enjoying the same rights for [telescope] observing time and grants as they do."

Other prominent women include Jill Tarter, a leader in searches for extraterrestrial intelligence. Some believe that she was the model for Foster's "Contact" role. French astrophysicist Catherine Cesarsky recently served as the International Astronomical Union's president -- a position ranked by some as the most important position in astronomy. This group famously downgraded Pluto's planetary status.

Yet despite important progress, women are still underrepresented in astronomy and other technical fields. Less than 22 percent of the current members of the American Astronomical Society are women, but when the statistics are broken down by age, the younger the astronomers, the greater the fraction of them that are female. According to Kevin Marvel, the society’s executive officer, women are 30 percent of members who are 50 or younger, 36 percent of those 40 and younger, and 40 percent of the astronomers who are 30 years old or less.

Freedman said that it was important for parents and teachers to boost this progress by realizing "the subtle ways in which we can encourage (or discourage) young girls from going into science or being interested in math."

ISNS contributing writer Stephen P. Maran is the author of Astronomy for Dummies