The Power Of Kirigami

From architects to nano-engineers, people are exploring the geometries within the ancient art of papercutting to find their next big idea.
Image

(Inside Science) -- After making three little cuts on a conference brochure, Toen Castle folded up his pocket knife and slid it back into his pocket. He proceeded to make a few creases in the brochure, then, with a slight twist, two platforms rise up from the other side of the paper.

"Geometry is common across every length scale, which means we can make models with paper, then apply that insight down to the nanoscale, or up to the building scale," said Castle. A physicist originally from Australia, he now explores the possible geometries of all things big and little at the University of Pennsylvania in Philadelphia.

One of Castle's main goals is to come up with new ways to conjure 3-D structures out of 2-D surfaces. For this he turns to the Japanese art of kirigami. Kirigami is similar to origami, except you can cut into the paper as well as making folds. The concept is on display in children's pop-up books, where a 3-D model of a castle, for example, can rise up from carefully arranged flat sheets. Today, creators of all kinds, from engineers to architects, are delving into the powerful geometry of kirigami for new inspiration.

Jenny Sabin, an architect from Cornell University in Ithaca, New York, has been working closely with scientists across disciplines -- from biologists to mathematicians to materials scientists -- for her next big idea in architectural design.

"In architecture, we look for assemblies that can adapt and respond to environmental conditions," said Sabin. "Kirigami provides the powerful geometry that allows us to do exactly that." 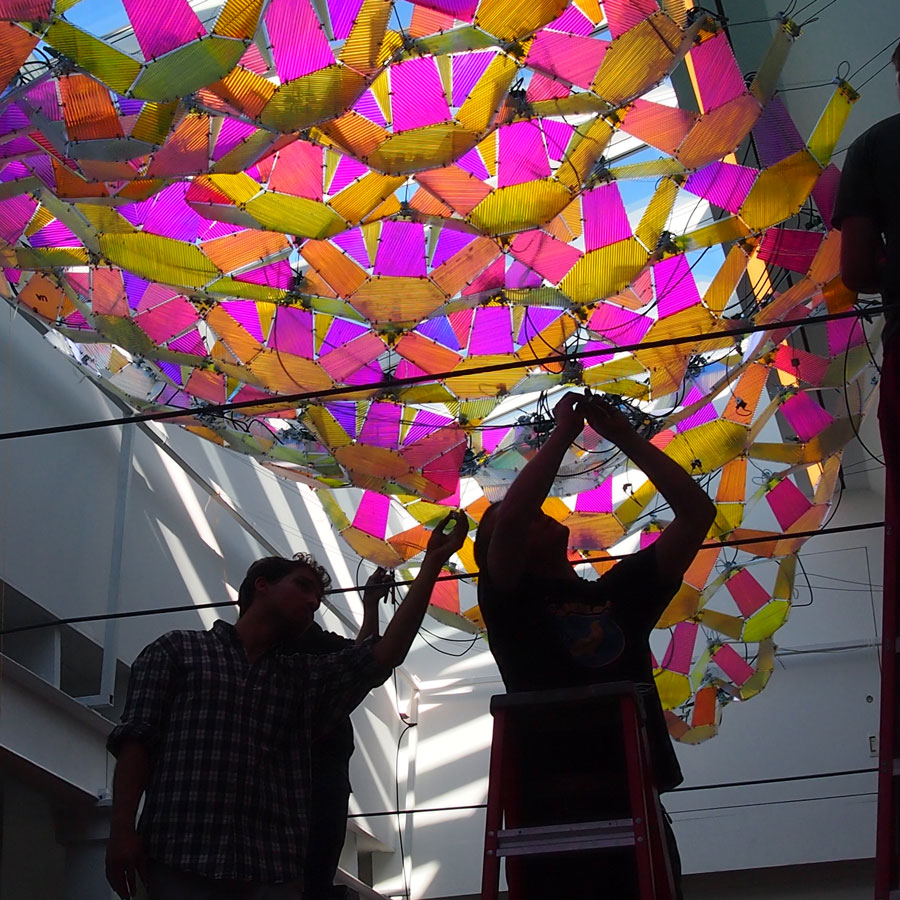 The Colorfolds project by Sabin and her team at Cornell University.

In Colorfolds, one of the recent projects by Sabin and her team at Cornell, they first drew inspiration from how human cells connect with each other, then constructed a dazzling, shape-shifting installation using kirigami. The result is a large overhanging piece of art that can contract and relax in the presence or absence of people below. The sensing mechanism then changes the contours of the surface -- like the goose bumps on our skin -- and alters the way light is scattered through the sculpture's colorful panes.

While the novel functionalities of Sabin's prototypes might not seem super practical to the layperson, she argues that the project could be widely applicable in industry because it explored new ways to construct 3-D structures out of 2-D surfaces that can be manufactured and transported easily.

"The economy comes from saving materials, efficiency of digital fabrication planning, and the logics for assembly and construction," she said.

Generating electricity on your finger tips

One of the powerful aspects of kirigami-inspired research, as Castle mentioned, is that the geometries transcend length scales. The same exact cuts and folds that make up Sabin's Colorfolds could perhaps be used to construct a tiny component for a medical nanorobot one day.

“We're not good at 3-D printing on the nanoscale yet,” Castle said, "but we know how to mark and cut a 2-D sheet and fold that into a 3-D shape. We can even put the sheet into a solution that can make it fold itself -- some sort of self-assembly mechanisms for objects that are too small."

Zhong Lin Wang is one of the many materials scientists currently looking to apply kirigami in miniature devices. Working out of his lab in the Georgia Institute of Technology in Atlanta, Wang and his team have already published more than 20 peer-reviewed papers on tiny machines called nanogenerators that use physical forces to generate electricity.

Almost all of their tiny inventions are based on the triboelectric effect, which is a type of electricity generation using physical movements, like the static generated by running a plastic comb through your hair. In one of his latest contraptions, Wang sandwiches a sliver of copper between two pieces of very thin paper with tiny flaps cut into them. As the flaps open and close they generate small amounts of electricity.

According to Wang, although the electricity generated by these miniature devices is often too small to power devices like smartphones, it can be used for biomedical sensors, or as a power source for nanorobots in the future. The current model for this specific generator is still a few inches across, but it could be scaled down in the future for implants or sensors. If the efficiency can be increased, then it might also be used in self-powered devices such as a phone that recharges when it rubs against your pocket while you are walking.

First as art, then as science

People in East Asian cultures have played with different ways to cut and fold paper for centuries. Although there are precise rules for each culture's papercutting art, the general techniques have often found their way into our everyday lives without many of us noticing at all.

"There are techniques used by dressmakers. It gives you everything that's amazing about the way that clothes, which are made of flat sheets of fabric, can fit a curvaceous human body," said Castle. "There are also techniques used by surgeons -- sometimes complicated cut patterns are made to make sure that the scars heal up nicely, with the way [the] human body moves."

However, it is not until the past few years that kirigami has become somewhat of a buzzword among academics. There is now a more conscious and concerted effort to explore the technique's potential.

"More and more people are becoming fascinated, absolutely fascinated by the geometry," said Katia Bertoldi, a materials scientist from Harvard University in Cambridge, Massachusetts. Her group has also recently looked into using kirigami to alter or introduce new mechanical properties to flat surfaces.

"First it was all about origami. Now, it's kirigami," she said.

Editor’s note: A previous version of this article stated Colorfolds responds to external stimuli such as heat and cold. We have since modified the passage to reflect the correct response mechanism.