Predicting The Path Of Radioactive Outbursts

Scientists learn to measure the threat from radioactive aerosols after an accident.
Image 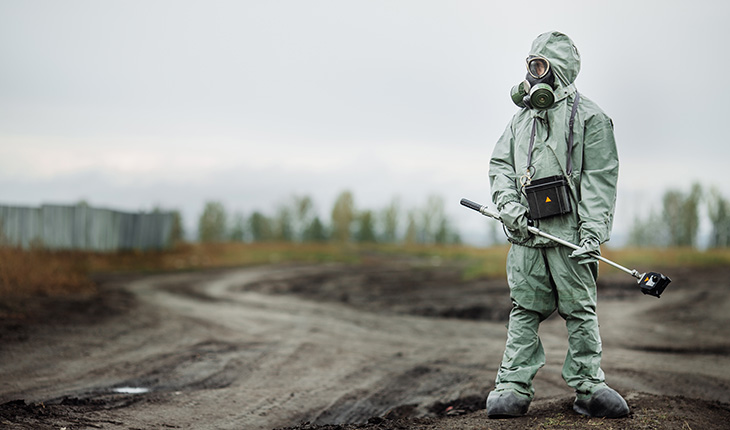 Scientist dosimetrist (radiation supervisor) in protective clothing and gas mask with Geiger counter checks the level of radioactive radiation in the danger zone.

(Inside Science) -- On March 28, 1979, a partial meltdown at a nuclear plant in the middle of the Susquehanna River spread panic through central Pennsylvania. Besides the potential for an explosion that would spread radioactive material through the air, the Three Mile Island complex puffed radiation into the air at least once.

The burp sent only a small, not-dangerous amount of radiation into the air. But, because monitoring then was minimal and crude, no one was sure how much there was and the potential peril. Do you order the population to evacuate or do you not?

Largely because of that incident – which does not appear to have harmed anyone – nuclear facilities are now monitored with sophisticated equipment. And, according to research done at North Carolina State University in Raleigh, adding off-the-shelf software and accepted modeling techniques to established monitoring could avoid unneeded panic.

Using these tools, the researchers, led by Robert Hayes, who studies nuclear proliferation, sampling the air off-site could tell where the radioactive particles were coming from, how much was released into the air, and where it was going.

In a paper published in the April edition of the journal Health Physics, the finding might even be useful in case of terrorist attack.

The research was done at the Waste Isolation Pilot Plant (WIPP), an underground storage facility for nuclear waste in New Mexico. A 55-gallon drum of waste material, incorrectly packaged, exploded, accidentally releasing a very small amount of radioactivity into the air on Valentine's Day 2014. The explosion was 2,150 feet underground and released a total of 2 millicuries, which is less than what is typically involved with a nuclear medicine scan.

Although that was a minute 1 percent of the radiation the facility was licensed to release, the plant has been shut down and may not open for years.

Because of equipment then posted at WIPP, Hayes could tell the size and location of the release. Then, using Department of Energy equipment and software, and meteorological data – the same used for weather prediction – he predicted where a plume could be expected to go and how radioactive it would be.

When he compared the data he expected with the data provided by off-site monitoring facilities of the path after the explosion, he found the prediction was almost correct, within a tenth of a millirem, a unit of radiation exposure.

"Entirely impressive," he said. (According to the American Nuclear Society, the average person is exposed to about 620 millirems per year from the environment.)

"It has long been assumed – for the last 100 years or so – you release a chemical or a smoke of some sort and you can measure that as it is transported through the air," he said. "Scientists guessed that would work with radioactive aerosols," he said. "To the best of my knowledge, this is the first empirical demonstration that you can trace radioactivity through the air."

WIPP is not expected to resume operation for at least two years.

The technique has several applications. For example, it could be used if a terrorist detonates a "dirty" bomb in the US. The technology would be able to predict where the deadly radioactive cloud is going with greater exactitude than current simulations. Monitoring stations are already in place across the country capable of doing that.

Further, said Hayes, the technology would help in monitoring violations of nuclear test ban treaties. Now, ships in the ocean monitor nuclear tests for signs of radiation in North Korea. With this technique, the tests could be monitored from aircraft more efficiently, looking for fallout inconsistent with natural phenomena.

In the case of another Three Mile Island situation, people living in the area would know what actions, if any, to take.

"If any good came out of Three Mile Island, we learned a lot of lessons to take to heart for response," said Craig Marianno, who studies nuclear issues at the National Security and Science Policy Institute at Texas A&M University in College Station. "One is to predict where something might go and to be able to order an evacuation if necessary."

If there is another nuclear incident, the response would be: When the sensors are triggered, a federal interagency and assessment center would be activated, Marianno said. They would get the latitude and longitude of the event, and with weather data, run models on the direction of the plume to predict density values.

Officials could then give the public the information they need to escape.