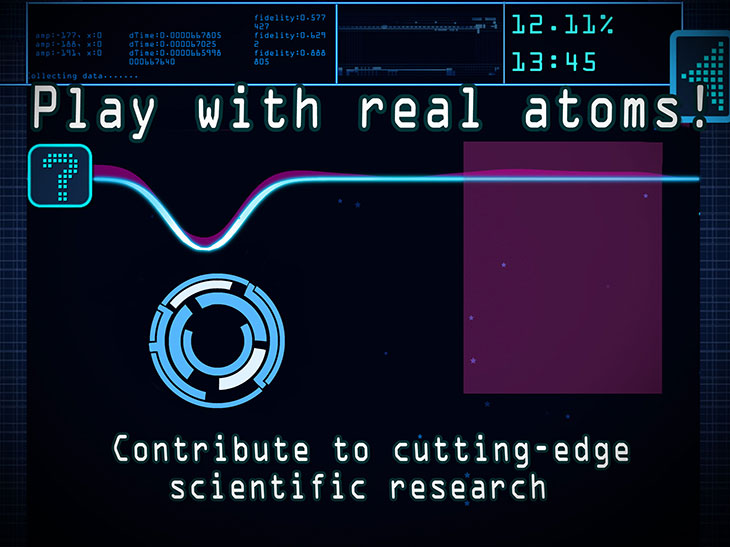 (Inside Science) – With the help of computer games, scientists have discovered that people can outperform computers at certain tasks in quantum physics, findings that may help bring extraordinarily powerful quantum computers one step closer to reality.

Quantum physics delivers the best explanation so far of how all known particles behave. It suggests that the universe is a fuzzy and surreal place at its tiniest levels. For instance, particles can exist in states of flux known as "superpositions," where they can each simultaneously exist in two or more places or spin in opposite directions at the same time. Another consequence of quantum physics is entanglement, wherein two or more particles can get linked together so they act like a single particle.

The ultimate limitation to the rate at which quantum computers can work is the quantum speed limit — the maximum speed at which a change can be made on a quantum level. Although the speed limit of simple quantum operations has been well-established for decades, there is no trivial way of calculating the fastest possible times of more complex operations, such as those used in quantum computation, said study leader Jacob Sherson, a quantum physicist at Aarhus University in Denmark.

Now, with the help of thousands of players of computer games, Sherson and his colleagues have found that humans can help redefine quantum speed limits set by current computer-based methods.

Citizen science games seek to channel some of gamers' brainpower toward crowd-sourced answers to major problems in science. Humans are currently better than computers at certain tasks, such as image recognition. Players of computer games such as Foldit, Galaxy Zoo and EyeWire that exploit this human superiority have already helped researchers analyze proteins, galaxies and the brain, respectively.

Until now, scientists had not applied the strategy of "gamification" toward quantum physics. "I think people were scared off by the esoteric nature of quantum physics," Sherson said.

Sherson and his colleagues designed an online game platform called Quantum Moves that had games representing some of the operations a quantum computer might carry out. Roughly 10,000 gamers have played these games a total of about 500,000 times.

In one game, BringHomeWater, players are prompted to collect and move atoms to a target area as quickly as possible using tightly focused laser beams that can act like tweezers. However, an item resembling a bucket of water is balanced on top of each atom, and players have to find the quickest way to move the atoms without causing water to slosh over the edge of the buckets.

This game mimics a quantum computer based on hundreds of atoms suspended within 3-D lattices of light beams, with the atoms trapped at the points where the beams intersect. Laser tweezers are used to move these atoms near each other so they can get entangled. However, if the atoms get excited too much — say, if they are pushed too hard — then that energy can prevent entanglement from occurring.

Computer programs found quick ways to bring atoms together for this operation, but after a certain speed, the software failed to find working solutions. This led scientists to believe the algorithms hit the fundamental speed limit for this operation.

The scientists hoped that players might perform this operation as fast as existing computer programs. Surprisingly, people could beat this speed limit.

"It was a huge shock," Sherson said. "We trusted too much in the power of computers — when they failed, we thought anything better couldn't be done."

Sherson explained this problem has on the order of 1,000 different variables to account for. The current computer program essentially randomly scans this entire space of possibilities to look for the best solutions, and "is afraid to exclude any region of the landscape," Sherson said.

In contrast, the human players focused on possibilities that looked encouraging, ignoring the ranges of options that did not. "Humans are good at ignoring the complexity of a problem, at seeing through it and intuitively finding promising solutions," Sherson said.

The best of humans and computers

The researchers developed new software that mimicked two different classes of strategies that helped players slightly outperform computers. They discovered their new program could perform twice as fast as the previously accepted speed limit for this quantum operation. "We combined the best of both worlds, taking intuitive solutions from humans and the analytical skills of computers to go way beyond either of them alone," Sherson said.

The scientists are now experimentally testing whether this program is as fast as their work claims. They suggest that gamification could help solve other complex problems in quantum physics and beyond.

"Being able to successful gamify problems in quantum physics is a novel and potentially very powerful way to channel human brainpower to advance research, and could have incredible implications for the development of quantum technologies such as quantum computers," said quantum physicist Sabrina Maniscalco at the University of Turku in Finland, who did not participate in this study.

Physicist Tyler Volkoff at Seoul National University, who did not take part in this research, found these findings interesting, but he suggests the improvements gleaned from humans are rooted in how this specific problem could be represented simply in game format. "Other quantum control problems might not benefit greatly from gamification," Volkoff said.

Future research can analyze more data from Quantum Moves to find out how gamers learn winning strategies. These findings can then help improve the ways in which artificial intelligences learn how to solve problems, Sherson said.

"Citizen science is at the frontline to see where people might still do better than computers, and to make computers think more like us," Sherson said.

The scientists detailed their findings in the April 14 issue of the journal Nature.

Why Training with Heavier or Lighter Baseballs Could Help Pitchers Throw Faster
Fossil Bite Marks Show Some Dinosaurs Ate Their Own
Royal Jelly Does Not A Queen Make
What Does the Spiny Lobster Sound Like? Loud.
Tyrannosaurs' Long Legs May Have Been for Marathons, Not Sprints
END_OF_DOCUMENT_TOKEN_TO_BE_REPLACED