The speed of light isn't fast enough for some market transactions. 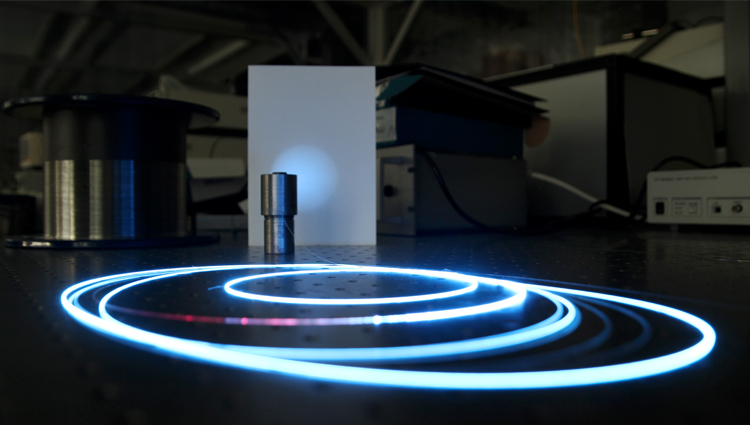 (Inside Science) -- The profit made on a stock share bought and sold a moment later might only be a penny or so, but if multiplied by millions of shares over the course of a day the money earned can be big.

High-frequency trades, characterized by short holding periods, now represent about 70 percent of all stock trades in the U.S.  Even though most of these trades occur in the form of pulses racing down optical fibers, even this pace isn't fast enough for some people. Two Massachusetts Institute of Technology researchers in Cambridge have an idea about how to speed things up.

When an investor in New York decides to buy a stock on the New York Stock Exchange, it takes about 500 microseconds (millionths of a second) for the transaction to go through. Only a tiny portion of this "latency" is due to the time it takes light to travel from the computer issuing the "buy" order to the stock exchange. Light travels up the length of Manhattan along Broadway in approximately one microsecond.

But what if your office were on the other side of the world, in Shanghai?

Then the travel time of light moving out across several optical fibers and racing around the globe would have to be figured in. In fact, the delay now would be at least 40 milliseconds (thousandths of a second), nearly 100 times longer than for the investor in New York.

The rapid buying and selling of securities by exploiting momentary price differences in far flung markets is called arbitrage. If, for example, some traders are buying shares of a company for $100 in New York and other traders are selling shares of the same company for 98 in Shanghai, then an agile middleman could snap up shares in one place and sell them in the other. The process is relatively low-risk unless prices change unexpectedly or a competitor beats you to the sale. To maintain an edge over other traders, it is crucial to be able to deliver information as fast as possible.

The latency disadvantage of globally distributed markets can't be entirely erased by technology, but the comparative lag times for international stock trades in general can be lessened by employing intermediate trading points. Alex Wissner-Gross, a physicist at the MIT Media Laboratory and Cameron Freer, a mathematician now at the University of Hawaii, propose to blanket the world with computer stations positioned along the paths between all of the major stock markets.

Securities trading companies could put semiautonomous computers at these strategic crossroads. Programmed with sophisticated buying and selling instructions these computers would act much more promptly to price signals coming from remote markets than if the signals had to travel all the way to the home office.

Wissner-Gross explains his proposal with the following analogy. If you accidentally touch a hot burner, a nerve signal goes not directly to the brain but to the spinal cord, where the sensory information "burn" can be processed more quickly, triggering a faster motor response; a muscle is commanded to retract the finger. Later the brain is notified of the whole episode, but when speed really counted, it was the lower-level part of the nervous system that issued the command.

This, according to Wissner-Gross, is analogous to what the proposed computer network would do. Indeed, he sees this kind of practical development as one more technological step in the human race's effort to "blanket the planet with computers, covering the world with a fabric of intelligent sensors."

"Wissner Gross and Freer have proposed a network and developed a technique for traders to determine the optimal geographical location to process information coming from multiple exchanges," Brogaard said. "It also helps to ensure faster convergence of prices, making the law of one price, a fundamental principle for the pricing of assets, hold at even smaller time increments."

Faster technology has long been a part of stock transactions. In the early 19th century carrier pigeons brought the fastest information about any kind of breaking news that could affect stock prices. Later came telegraph and telephone networks. Then computers speeded up transactions in a big way.

A recent example is the dedicated fiber optical line built between New York and Chicago. According to Forbes Magazine, the fiber -- 825 miles long if measured by distance or 13.3 milliseconds by the clock -- improved the latency between those cities by 3 milliseconds, enough to justify the cost of running the fiber.

The hundreds of computers linking the financial markets would speed things up.

"But the main reason behind the network would be to bring geographically separated prices more rapidly into equilibrium," said Freer. "We are currently talking with financial firms about licensing our technology for implementation on existing networks. In the longer term, new networks and computers could be deployed by exchanges, brokerages, etc., much like the current infrastructure in financial hubs."

The new results appeared in the Nov. 5 issue of the journal Physical Review E.