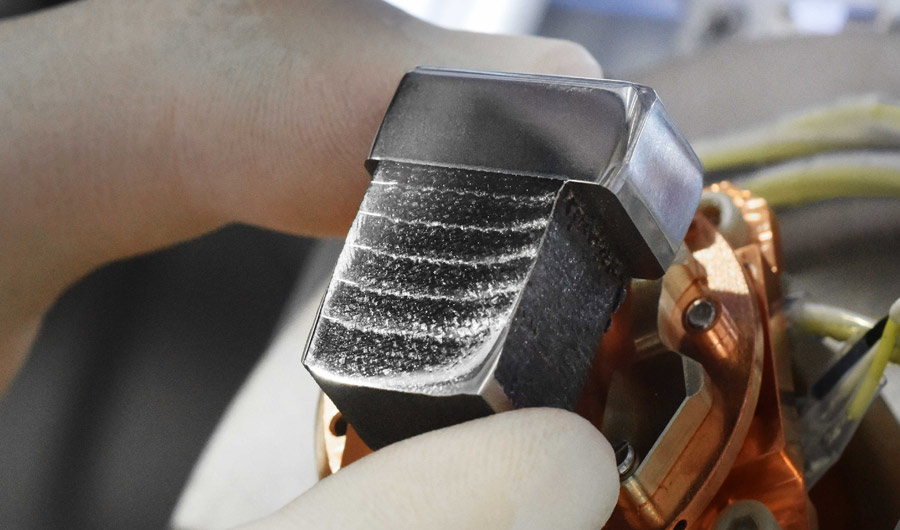 (Inside Science) -- Swords made of the legendary alloy known as Damascus steel were renowned in medieval times not only for their unique beauty -- possessing wavy bands on their surfaces reminiscent of flowing water -- but also for their incredible sharpness and toughness. Inspired by this ancient metal, researchers have now used lasers to create an even stronger alloy, a new study finds.

Although the steel is named after Damascus in Syria, the metal was actually produced in India. The secret of how to forge this alloy was eventually lost, and metallurgists have debated for generations how it was made.

The swirling patterns of dark and light stripes on ancient Damascus steel resulted from a combination of hard and soft layers with different shades caused by differing levels of carbon. These alternating layers gave the steel excellent strength -- the hard layers resisted damage, while the soft layers reduced the overall brittleness of the alloy.

Now scientists have created a modern alloy like Damascus steel -- not by repeatedly folding and forging together different steels, as modern blacksmiths seeking to replicate the ancient metal typically do, but with lasers to precisely control the properties of their alloy on a microscopic scale.

The researchers created their steel in cycles by repeatedly spraying a powder made of iron, nickel and titanium onto a surface and then blasting it with an infrared laser, a kind of 3D printing technique known as laser additive manufacturing. After every fourth layer was produced, the molten alloy received a two-minute respite in which it cooled rapidly before it was coated with a fresh sheet of powder and lit up with the laser. All this work took place in a chamber filled with argon, which as a noble gas would not chemically react with the metals.

The cooling triggered grains of nickel-titanium only nanometers, or billionths of a meter, wide to form within the steel. These particles hardened the steel by preventing any defects from moving around within the alloy.

The cycles of heating and cooling produced a metal with alternating hard and soft layers much like Damascus steel. "While ancient Damascus steel consisted of layers with different carbon content, our steel has the same composition in both layers, which is a big advantage for additive manufacturing, because one does not need to change the powder," said study lead author Philipp Kürnsteiner, a materials scientist at the Max Planck Institute for Iron Research in Düsseldorf, Germany.

The new Damascus steel had comparable mechanical properties with modern ultra-high-strength alloys known as maraging steels, which commonly find use in critical aerospace components such as rocket motors. A key advantage of this new research is how one can use it to "program materials to have different properties in different parts of an object," said Iain Todd, a metallurgist at the University of Sheffield in England who did not take part in this research.

For instance, "you can imagine parts that are ductile on the inside and hard and abrasion-resistant on the outside," Kürnsteiner said. "This might lead to a revival of Damascus steels, who knows."

So far, the researchers have produced only small blocks of their metal. "There's a need to demonstrate this on more complex shapes than those presented in the paper, and to do this on a larger scale," Todd said. "But this is a good start."

The scientists detailed their findings online June 24 in the journal Nature.