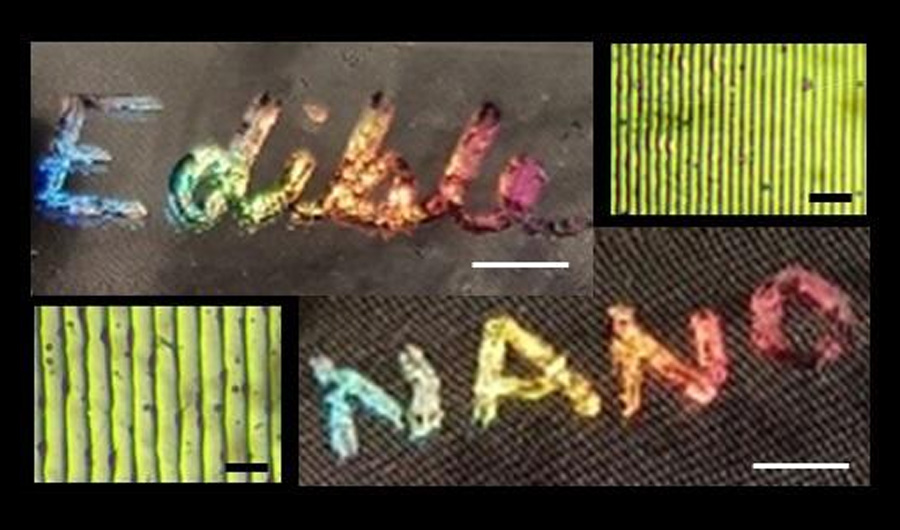 (Inside Science) -- Holograms are photos that, when illuminated, essentially act like 2D windows into 3D scenes. The pixels of a hologram scatter light waves falling onto them, making these waves interact with each other in ways that generate an image with the illusion of depth.

Most holograms are imprinted with lasers onto metal surfaces such as aluminum, and so are not edible. However, mechanical engineer Bader AlQattan at the University of Birmingham in England and his colleagues previously etched holograms onto transparent surfaces such as glass slides and contact lenses. AlQuattan's wife, Eiman Alnajjar, wondered if holograms could be printed onto transparent edible films of gelatin or corn syrup as well.

In a new study, the scientists created a solution of corn syrup and vanilla extract and dried it into a thin film. They coated this transparent edible surface with a layer of nontoxic black dye to help it absorb light. Next they used lasers to etch off most of the dye, leaving behind patterns of grooves only a few hundred nanometers, or billionths of a meter, wide.

When illuminated, these holograms generated rainbow patterns of light, with different colors appearing depending on the angle of view. The researchers could control the intensity and range of colors by varying the spacing between the grooves or the sugar content of the film.

The scientists note edible holograms could not only make food more eye-catching, but also serve as tags that are difficult to forge to help ensure food safety, just as holograms currently serve as security labels on currency, driver's licenses and credit cards. They are now experimenting with creating holograms using edible food colorings instead of the synthetic black dye used in the initial experiments, which was nontoxic but not designed to be a food product. The challenge is optimizing the lasers to match the dyes, especially as many of these dyes are not very consistent and stable, said study senior author Haider Butt, a mechanical engineer at the Khalifa University of Science and Technology in Abu Dhabi, United Arab Emirates.

Eventually the researchers want to do away with the transparent film altogether, etching holograms onto food dyes or directly onto food surfaces, Butt said. He, AlQattan and their colleagues detailed their findings online Feb. 1 in the journal ACS Nano.