An automatic telescope network could conduct tedious measurements at centers of galaxies. 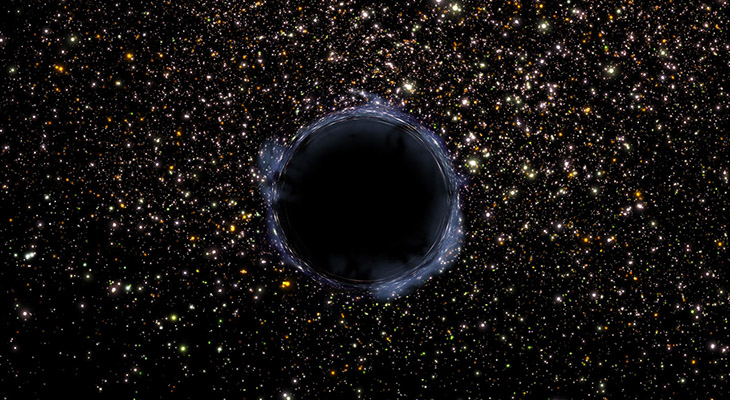 (Inside Science) -- Monstrously huge black holes could shed light on how the universe has evolved over the eons, if scientists could pinpoint their masses. Now a network of robotic telescopes could help astronomers handle all the dirty work of gauging the masses of these black holes.

The center of virtually every galaxy is home to a supermassive black hole up to billions of times the mass of the sun. Many of these gigantic black holes are relatively tranquil, but others are thought to power what are known as "active galactic nuclei" or AGN, which can spew more energy than the entire Milky Way. Astronomers suspect this radiation is released from surrounding matter that heats up as it accumulates in "accretion disks" that spiral into the black holes.

However, deducing the masses of supermassive black holes is difficult.

The mass of a black hole determines the strength of its gravitational pull, so analyzing the way matter orbits a black hole can help one measure its mass, but there are only a few cases where astronomers can discern stars and other objects around supermassive black holes. Pinpointing the masses of an AGN's black hole is especially difficult: because they are so bright, their light can obscure anything orbiting nearby.

One strategy that scientists have devised to work out the mass of AGN's black hole is called reverberation mapping. This approach first looks at light radiated from the accretion disk surrounding the black hole. This radiation can in turn make gas clouds farther away from the AGN glow with their own light.

The level of radiation from the accretion disk of a black hole can vary over time. By observing the colors or wavelengths of gas clouds far from a black hole, scientists can better understand the black hole itself. The amount of time it takes for distant gas clouds to react to the radiation variations can help scientists deduce the distance between the accretion disk and the clouds. The color of light from the gas clouds can also reveal their velocity — much as how a police siren sounds higher-pitched as the car drives toward you and lower-pitched as it moves away. In this case a cloud moving toward Earth looks bluer while one moving away is redder, in a process called Doppler shift. By tracking both the distance and velocity of the clouds, researchers can then calculate the gravitational pull and the mass of the black hole.

The problem with reverberation mapping is it requires many hours of observation of an AGN before it can infer its black hole's mass.

"Reverberation mapping campaigns require precision measurements, long monitoring and also a bit of luck that the AGN is varying in luminosity during the campaign," said the study's lead author Stefano Valenti, an astronomer at the Las Cumbres Observatory Global Telescope Network and the University of California, Santa Barbara.

Now, instead of depending on people for reverberation mapping, scientists are relying on a completely robotic telescope network.

"Human effort is always expensive, especially if you're talking about highly trained, highly educated people working in technical areas," astronomer Bradley Peterson at Ohio State University in Columbus, who did not take part in this research, said in an email. "The more one can offload tedious tasks to robots — and observing the same galaxy for 200 nights at a time is indeed tedious — the more productive people can be by putting their efforts into the more interesting and challenging parts of the program, such as understanding and interpreting the data."

The Las Cumbres Observatory Global Telescope Network is currently composed of nine 1-meter and two 2-meter telescopes at sites around the globe. Everything about its operations are controlled robotically.

"We wake up every day with new data on our computer ready to be analyzed," Valenti said. "The potential of such a network is immense."

To see how well the network performed reverberation mapping, the scientists observed the galaxy Arp 151 for roughly 200 days. Arp 151's nucleus produces a highly variable level of radiation, and it was chosen because it was already well-studied. The researchers calculated the mass of Arp 151's supermassive black hole as 6.2 million times the mass of the sun, consistent with previous estimates.

In the future, Valenti said he and his colleagues plan to analyze supermassive black holes that are both farther away and older in age to learn more about how they and their galaxies have changed over time. The scientists detailed their findings online Nov. 5 in Astrophysical Journal Letters.

Researchers Study Violinists To Learn How Humans Act in Synchrony
Alligators May Be Able to Survive Venomous Snake Bites
New Theory Says We’ve Been Wrong About How Bubbles Pop
Crustacean Genes May Solve Debate Over How Insects Evolved to Fly
Some Beetles Survive Being Eaten, New Study Finds
END_OF_DOCUMENT_TOKEN_TO_BE_REPLACED

COVID-19 Vaccine, Sharks and Mezcal
Crabs Use Belly Sounds To Communicate
Touring The Trinity Test Site
Protests, A Retracted Paper, and a Super-Earth Planet
Why Is an Empty Shampoo Bottle So Easy To Knock Over?
END_OF_DOCUMENT_TOKEN_TO_BE_REPLACED