A mechanical predator could stress an invasive species of freshwater fish to the point that they may reproduce less.
Image 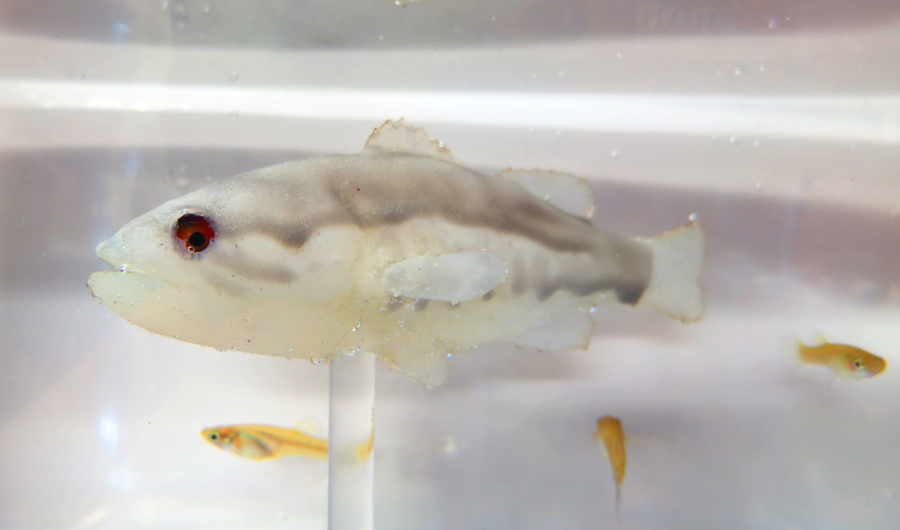 Rights information: This image may only be reproduced with this Inside Science article.

(Inside Science) -- A robotic fish could scare and stress out an invasive species -- enough that the invaders lose weight in lab experiments. The new findings suggest that robots might one day help control such pests in the wild.

Scientists focused on the mosquitofish (Gambusia affinis), which may now be the most widespread freshwater fish in the world. These small, hardy, extremely aggressive fish were introduced into many waters in the early 20th century to help gobble up mosquito larvae -- they can eat up to 167% of their body weight daily. However, they have often outcompeted and decimated many native fish and amphibian populations.

"Mosquitofish are everywhere and there are tons of them," said study co-author Maurizio Porfiri, a mechanical engineer at New York University.

Attempting to capture mosquitofish by hand "is the same as trying to empty the ocean with a spoon," Porfiri said. On the other hand, "if we leave traps in the wild, then most probably, we will capture many other species together with mosquitofish, with the risk of doing more harm than good for the environment." Efforts to use pesticides to combat this invasive species ended up hurting native fish, the researchers added.

Instead, Porfiri and his colleagues sought to control mosquitofish by influencing their behavior using robotic fish. In previous lab experiments, they had shown that real fish could be coaxed to follow the mechanical fish around, research that might one day help lead schools of fish away from pollution, oil spills and other dangers.

The researchers created a robot whose silicone body was shaped and painted to closely resemble a largemouth bass, the main predator of mosquitofish. More than 80% of the fish juvenile largemouth bass consume in their native waters are mosquitofish. The robot was controlled through a rod extending from the bottom of the fish tank, and a computer used a camera to guide the robot.

Porfiri and his colleagues exposed groups of mosquitofish to this mechanical replica for one 15-minute session per week for six consecutive weeks. The researchers varied how lifelike the robot behaved across these groups. At times it swam at a constant speed, while in other instances it moved at varying speeds, mimicking swimming patterns the scientists recorded of juvenile largemouth bass. Sometimes it even simulated attacks against the mosquitofish.

"The robot is designed based on biological principles that would make it appear as a threat only to mosquitofish, leaving no other footprint on the environment," Porfiri said.

The scientists monitored mosquitofish for behaviors associated with fear, such as going motionless, swimming in erratic patterns, and hesitating when exploring unfamiliar and potentially dangerous open spaces. They also anesthetized the fish weekly to measure their weight and length.

As expected, mosquitofish exposed to aggressive robot behavior resembling real-life predators showed the most amount of fear. They also lost weight, which suggests they were stressed out and had lower reserves of fat. Fish with lower energy reserves are less likely to pursue reproduction or survive long in the wild.

"We are not killing fish and we are not planning to do so," Porfiri said. "Our plan is to selectively stress the bad guys so that they will be less problematic for native and endangered species. Hopefully, a consequence of this stress is that mosquitofish will reproduce less and their number will decline over time in areas where they should not be present."

This work "provides a sophisticated strategy to manage animal species considered pests," said zoologist and biorobotics engineer Donato Romano at the Sant'Anna School of Advanced Studies in Pisa, Italy, who did not take part in this research. "This could represent a landmark for future directions in integrated pest control aiming for safer pest management. "

For example, "imagine a group of robots patrolling an area where mosquitofish are, just for several minutes per day," Porfiri said. "If our approach works outside the lab, we could foresee a new way to defend native species and eliminate invasive mosquitofish from environments in which they do not belong."

Future research can analyze how weight loss might affect mosquitofish reproduction. The scientists will also seek "to equip the robot with a computer vision system such that it could recognize mosquitofish in the wild," Porfiri said.

The scientists detailed their findings online Sept. 11 in the Journal of the Royal Society Interface.