The Science Behind Michael Phelps' Success 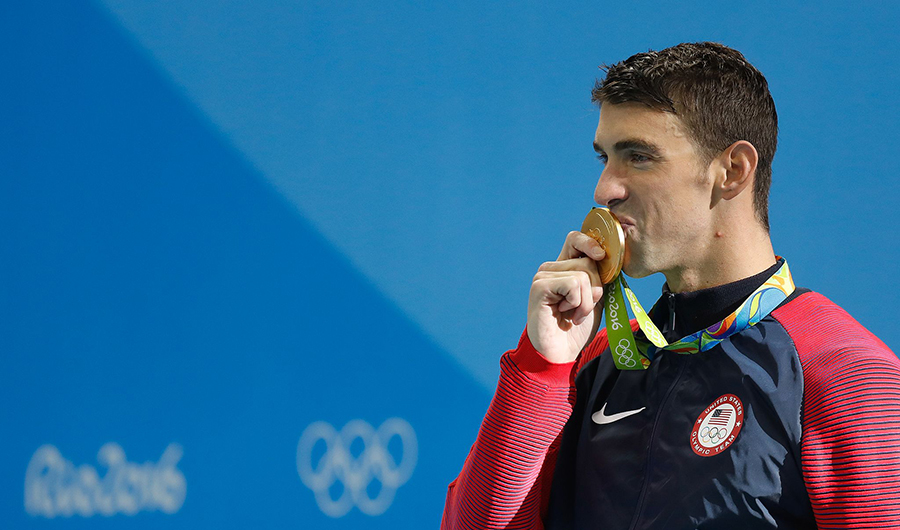 Michael Phelps at the 2016 Summer Olympics in Rio de Janeiro, where he won five gold medals and one silver.

(Inside Science) -- On June 1, 28-time Olympic swimming medalist Michael Phelps spoke to an enthusiastic crowd of sports researchers, physiologists, coaches and trainers at a meeting of the American College of Sports Medicine in Denver, Colorado. He stressed that anyone who works hard enough can succeed, but also revealed details of the elaborate, science-based regimen that contributed to his unprecedented achievements.

Phelps said many times that his success was due to hard work. But he also repeatedly credited the team of people that guided his swimming and strength training, his recovery and even his sleep throughout his career.

He also described his drive to be the best. After he finished fifth in his first Olympic final in Sydney in 2000 as a 15-year-old, Phelps said he used his absence from the medal podium as motivation.

"I decided to get in the pool the next day. Six months later I broke my first world record. That's when things really took off."

Phelps added that visualization and preparation for all possible contingencies was an important part of his training. That way, nothing that happened during a swim meet would cause him to freak out or leave his comfort zone. Between the hard work and preparation, he said, he was prepared to succeed.

"It's not rocket science," he said.

In 2008 in Beijing, Phelps won a record eight gold medals in a single Olympic Games. In the 100-meter butterfly he edged Serbian Milorad Cavic by 0.01 seconds. The night before that race, Phelps said he told his coach that he didn't have anything left. That's when at least some science kicked in.

Phelps said that his training team regularly monitored his sleep, collecting data specifically on the amount of REM, deep and light sleep he got. "We had goals that we wanted to hit every night for that, too."

And even though he did not enjoy the high-altitude training camps in Colorado Springs, which he described as "prison," he acknowledged that the training helped him succeed.

"I knew that training at altitude for 21-24 days was what I needed. You can get twice the work done that you can at sea level," he said. Because of lower amounts of oxygen at high altitudes, athletes’ bodies work to produce more red blood cells when they train high above sea level. "To have the resources that we had, to be able to have the blood work and the help that we had from the [United States Olympic Committee] … I was able to see what I needed to fix, whether my iron was low, or my vitamin B or vitamin D or anything was low, so we knew what was going on."

Regarding the reason for his unmatched success, Phelps said, "I don't want to say it's easy. … But if you sacrifice, if you're willing to work hard, if you can figure out small little things that make you work, and you have the right people around you -- it's really easy."

"There is some science behind it," said Thompson, the organization's president. "I just want to make that clear."