Social-media sequel to #TheDress is not the same scientifically.
Image 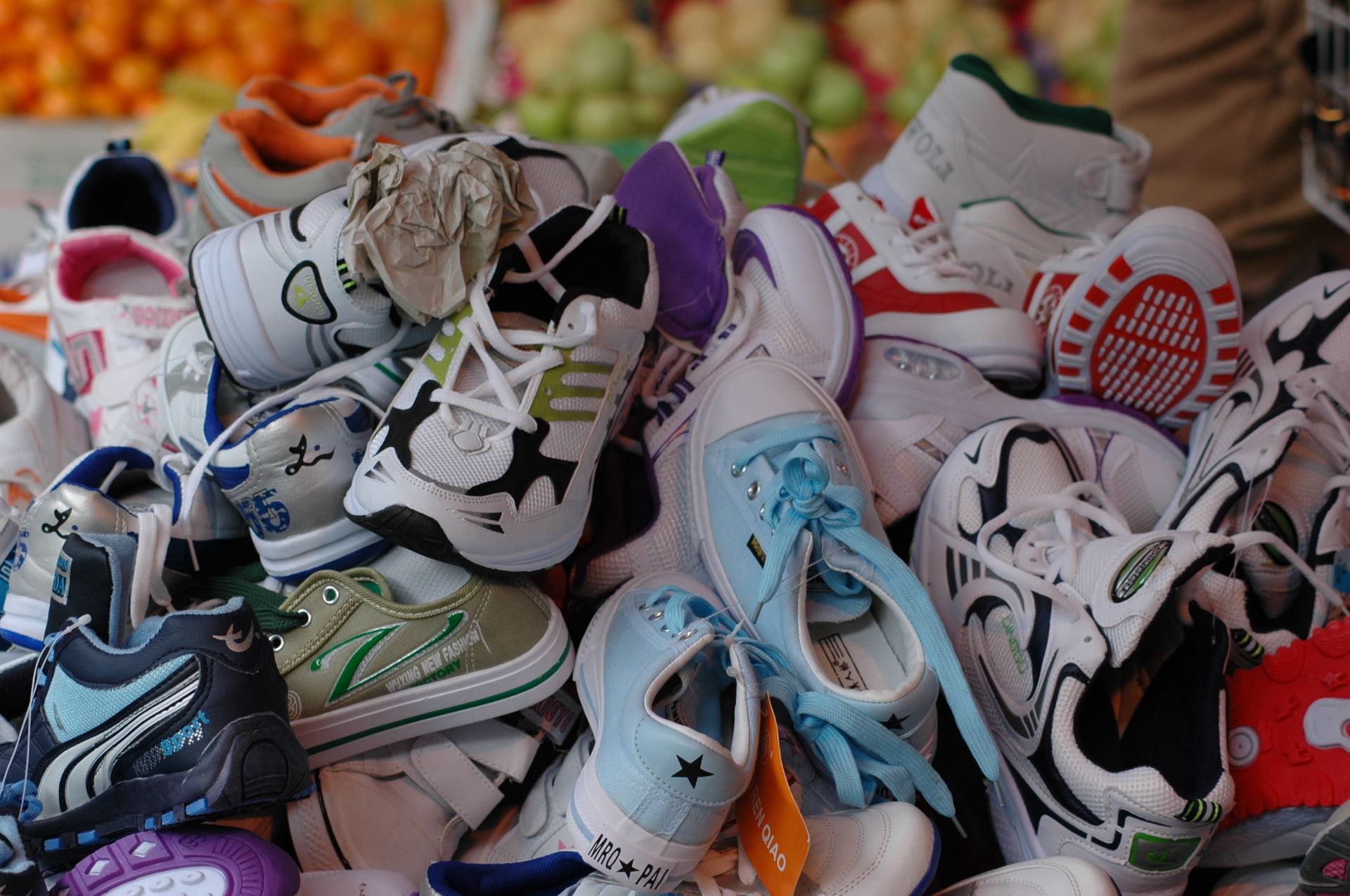 (Inside Science) -- Someone posts a fashion-related picture on a social network. People freak out, observing that the photo contains an optical illusion. Media outlets cover it en masse. And science journalists like me eventually attempt to wrangle with what's going on visually.

Survivors of #TheDress, welcome to #TheShoe.

WHICH COLOR MATCHES THE SHOES THE BEST pic.twitter.com/Qv3mpOOf8w

The two bottles of nail polish, one slightly more purplish than the other, both seem to match the high heel shoe in the photo's bottom corner, confusing people. Is the shoe pink, or is it purple?

Like clockwork, Twitter tore itself apart over the question, inevitably drawing comparisons to #TheDress, the phenomenon that was so divisive—and so scientifically interesting—that the Journal of Vision, a prestigious scientific journal, is putting together a special-edition issue on it. (For a great pop-culture history of #TheDress, check out Know Your Meme. For the science, head over to WIRED, Yahoo Tech, or Current Biology, a prestigious academic journal that featured three studies on #TheDress in May.)

But even though #TheShoe is similar to #TheDress in its virality, is the science behind the phenomenon similar?

It doesn't look like it, based on email conversations with some scientists, though the new photo is interesting in its own, slightly less impressive way.

"I don't think this has anything to do with the dress," Karl Gegenfurtner, a psychologist at Germany's Giessen University, wrote in an email to Inside Science. Gegenfurtner would know; he's an expert on how the brain processes visual cues, and he's studied #TheDress quite closely since it broke last year. "To me," he wrote, "it seems like the color of the shoe is just about in between the colors of the two nail polishes."

This is important, wrote Gegenfurtner, because staring at the polishes means that "we see the shoe only in the visual periphery," or the edges of our vision, where distinguishing between different colors becomes more challenging. This is a result of how our retinas are organized--specifically the mosaic of color-sensitive cells lining the backs of our eyeballs. Color-sensitive cells are at much higher densities at the fovea, the area of the retina responsible for our sharp, central vision. But as you get farther and farther away from your central vision, the retina's resolution gets coarser and coarser, making it harder to tell certain colors apart.

Visual perception expert Kathy Mullen, a psychologist at Montreal's McGill University, wrote in an email that she recommends turning the question of #The Shoe on its head. "Attend to the shoe and see if the two bottles have the same color," she wrote. "If so, then you do not have the peripheral color vision to reliably distinguish between the two shades."

When Gegenfurtner tried it, he found that he could "just about discriminate the two polishes when looking at the shoe, but that's because they're right next to each other." The contrast is just enough that he can tell the two apart. But as Mullen suggested, this may vary from person to person.

That's perhaps the most interesting thing about #TheShoe: The illusion depends in large part on where you are in relation to the image, according to Mullen. "The closer you view the photo, or the bigger it is," she wrote, "the further into the visual periphery the secondary stimulus"—the shoe—will be from the polishes when you're focusing on them, making it harder and harder to tell whether the shoe is pink or purple.

To see this in action, try out this totally simplified version of #TheShoe. Step back a bit from your screen and look at the following trio of circles, which are the colors of the purple polish (top), the pink polish (left), and the shoe (right). From afar, you can easily tell that they're all different colors. But focus on the white dot inside any one of the circles, and move closer and closer to the screen. The other two circles in your periphery start to look like the same color, don't they? 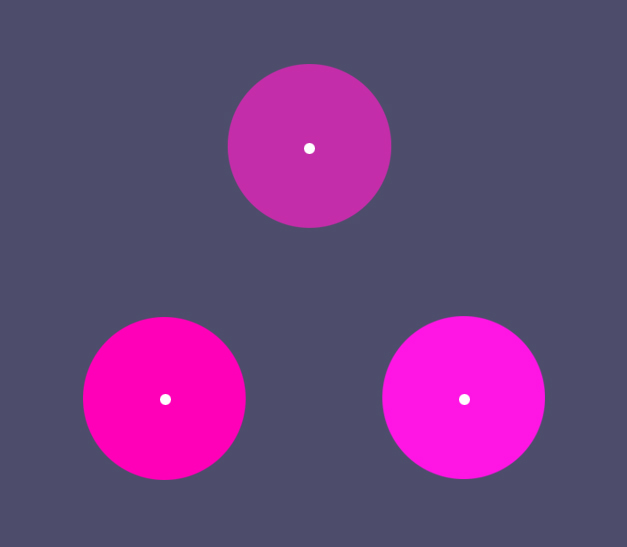 As for me, I first saw #TheShoe from about 50 cm (20 inches) away from my monitor, and the center of the shoe appeared 5 cm (2 inches) away from each bottle of nail polish. So if I stare at the nail polishes, the shoe is about 6 degrees outside of my central vision. And that's enough to get this illusion rolling. "Color discrimination, especially for some colors," wrote Mullen, "declines quite steeply in the periphery, and 6 degrees is certainly enough to show this, especially for smaller stimuli." In fact, this decline in color sensitivity is something that Mullen has looked at in some of her experiments, such as this study.

#TheShoe is an effective illusion because the limited hardware for visual periphery in our eyes forces our "software" -- our brain's visual processes -- to compensate, creating ambiguities. But objectively, could I provide an answer to @totallymendes' question? Is it pink or purple? Using Photoshop, I took color samples of the purple polish, the pink polish, and the big area in the middle of the shoe, and got their RGB (red-green-blue) values: 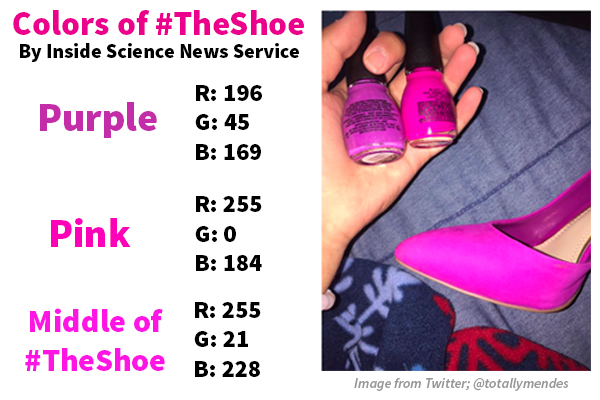 If you treat these three values like coordinates for the colors, and then you measure "distances" among the three, there's no contest. The shoe's hue is between the two, but pink is the better match.

But don't just take my word for it. I also asked Robin Fisher, CEO of personal styling company Polished Image and Style.

"The polish on the right matches the shoe the best," she wrote – another win in the "pink" column.

So there you have it, @totallymendes. Go with the pink – and keep the illusions coming.