The Science Behind Where Police Should Place Their Body Cameras 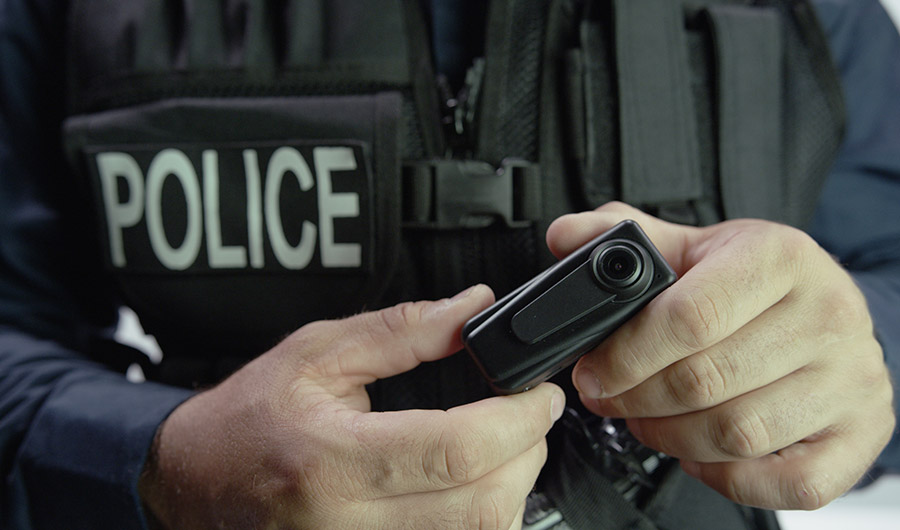 (Inside Science) -- Joel Suss, an Australian psychologist, had just arrived at Wichita State University in 2015, at a time when the U.S. media was becoming increasingly focused on police shootings. An expert in applying what's known as human factors to law enforcement, Suss studies how officers respond physically and psychologically to different environments, such as how well an officer fires a gun while under stress. He wanted to make contacts inside the local police department, so he signed up for the citizen police academy.

While enrolled, he heard about some research being done internally by the Wichita Police Department. Captain Brian White had mounted body-worn cameras on different parts of a police officer and recorded shooting drills. They wanted to figure out the best camera position for the diverse scenarios police officers often encounter.

That new study, recently published in the journal Ergonomics in Design, is the first, to Suss’s knowledge, to approach police body cameras from a design and ergonomics perspective. It’s just one example of the ways researchers are starting to delve into the bigger questions associated with body cameras, from artificial intelligence analysis to perspective bias.

In the study, Suss and his colleagues recorded three officers each completing 35 live-fire drills, in which they fired at a static paper target using three weapons they could potentially use in the line of duty -- a handgun, patrol rifle and shotgun. The researchers varied the officers’ starting position (facing the target, turned away from the target), shooting stance, and one- or two-handed grip. Four officers also engaged in live role-playing scenarios including domestic disputes, ground fighting, traffic stops, and pursuits on foot or in a vehicle. The team painstakingly analyzed each frame of the footage, assessing what the video showed at any moment.

In one scene, for example, an officer faced away from the target and then had to turn.

He also found that mounting cameras on the shoulders, epaulettes or collars actually changed the structure of the shoulders. “So sometimes when that happens, the camera that's on the shoulder ends up pointing down at the ground,” he said, “not at the target.” Suss says they plan to calculate overall proportions of target visibility for each camera-mounting position by averaging across drills, weapon types and officers.

While the results are preliminary, the paper does lay out a few recommendations. The researchers say camera-mounting positions on the head -- like glasses or baseball cap -- appear to provide a more complete view of the target than those mounted on the torso. It also seems that the torso-mounted cameras are less stable than those mounted on the head as they can be altered or obscured by officers lifting their arms.

The largest maker of police body cameras, Axon, makes different magnetic camera mounts, so police officers can actually move the camera around to different positions -- glasses, shoulders, cap, or chest. Suss says it allows a lot of flexibility -- an officer could quickly move the camera before entering a situation. But sometimes these mounts can pop off, especially in situations where a police officer is in a fight on the ground.

Body-worn cameras -- at least, those made by Axon -- are rolling all the time. But they only retain so-called events when an officer double taps a large button in the center of the lipstick-sized camera. Guidelines vary by agency, but officers are generally supposed to record when they enter a situation about which they could end up writing a police report. When activated, the camera keeps the previous 30 seconds of video, and anything going forward. Even when they’re used infrequently, it still adds up to hundreds of thousands of hours of footage each day for large police departments. (The London Metropolitan Police Service, for example, has 22,000 body-worn cameras.)

David Makin, a criminologist at Washington State University in Pullman, co-founded the Complex Social Interactions (CSI) Lab. Makin, who was not involved in the Wichita study, is designing algorithms and software to analyze body-worn camera footage. One of the main issues, he says, is that body cam footage is just that -- footage. “So you have thousands or tens of thousands of hours that doesn’t get looked at. It gets looked at when there’s an issue, and that’s it.”

Makin sees potential in that raw video. “If we think of it as data, we can deconstruct it and analyze it,” he said. “Then we can approach it as improving training, and improving risk management. Once you see it as data, there is no limit to how beneficial this can be to law enforcement organizations.”

Makin's CSI Lab has analyzed thousands of police-community interactions on video and numerous records from law enforcement incidents to identify, code and catalog key variables associated with a range of outcomes, positive to negative. Location, lighting, time of day, number of people present, gender, race, verbal and physical stress, and intensity of the interaction are among the contextual factors assessed.

Makin says that most police training requires officers to complete a given number of hours of instruction but what they have learned is not always measured. Video analysis, he noted, could offer officers the chance to identify best practices and learn from their own interactions.

The CSI Lab received a grant and equipment from Axon. Axon was once known as Taser International, but in the mid-2000s, the company came up with the idea to replace the Taser’s battery pack with a small camera that would activate when the taser was armed, in order to increase accountability.

Today, Axon has signed on 38 of 69 major U.S. city police organizations (cities with populations of 500,000 or more) to use their cameras -- making them by far the biggest player in the body-worn camera world. One way they are looking to use AI is to train algorithms to recognize faces, even if they are partly obscured. This will help in labor-intensive tasks like redacting minors from videos for use in courtrooms, says Steve Tuttle, Vice President, Strategic Communications for Axon.

Tuttle also says that eventually, a camera’s recording could fully replace written reports of events in policework. “You’re going to get a better report out of the video, audio, rather than a pen and a 3-by-5-inch card,” he said. What if the recording could stand in for all that paperwork back at the precinct? “It would make an officer less of a report-writer, and more of a reporter on scene,” he said

Axon’s case studies show that police use of body cameras reduces use of force complaints. In San Antonio, Axon says use of force dropped 42 percent since February 2016, when 55 officers with the downtown bike patrol unit received the first cameras. Formal complaints decreased 21 percent between 2015 and 2016, after roughly half the department was outfitted with Axon cameras.

Other studies aren’t quite as clear about the effect body cams have on policing. A large study in Washington, D.C., showed no effect after body cameras were introduced in 2015.

Remi Boivin, a researcher with the International Center for Comparative Criminology in Montreal, says there has been an evolution in studies of police behavior and cameras. “The first studies were really positive about the impact of body-worn cameras,” he said, adding that the first departments to deploy the tech were some of the more troubled police units across the country. “After that what we saw were experiments in regular departments where there were no big issues. If you start with low levels of use of force, it’s hard to go down from there.”

Last year, Boivin set out to answer an even more philosophical question: If we present footage as evidence, are we presenting an objective truth or are we presenting something that is fundamentally biased? He published a paper in the Journal of Experimental Criminology last year comparing how people interpreted footage from body cameras and from surveillance video. His takeaway? There certainly is a bias based on the camera's perspective, especially to people in law enforcement, if the only evidence is video from a body-worn camera, rather than from another point of view.

There is little research on the topic of perspective bias, so Boivin went to the library and picked up an introduction film studies textbook. “I think it was in the first 10 pages that there was a chapter named how to manipulate what people see.” All he could think of was the body cameras.

Jeffrey Zacks, a neuroscientist who studies film at Washington University in St. Louis, says the psychology of body camera footage hasn't been well studied -- although film directors have been exploiting first-person views for emotional impact since the early 1900s. He said neuroscientists haven’t yet started to study how perspective can impact moral judgments.

Zacks says one thing that is clear is that when people are forced to shift spatial perspectives --for example, extrapolating information from an overhead video versus a first-person one -- it’s a challenge. “We know a fair amount about the accessibility of spatial information,” he said. “If you have to shift perspectives to make a judgment, it makes it harder.”

In order to reduce this bias, Boivin thinks that body-camera footage should be presented with commentary. “It’s a good thing to present the footage, but you have to explain it, for example, to explain that the subject was 10 feet away,” he said. “We can’t assume the video can speak for itself.”