Insights may lead to advances in solar power.
Image 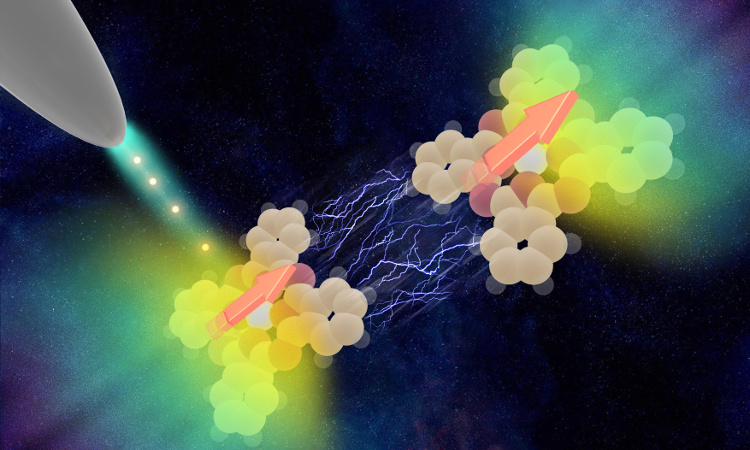 (Inside Science) -- Photosynthesis and other vital biological reactions depend on the interplay between electrically polarized molecules. For the first time, scientists have imaged these interactions at the atomic level. The insights from these images could help lead to better solar power cells, researchers added.

Atoms in molecules often do not equally share their electrons. This can lead to electric dipoles, in which one side of a molecule is positively charged while the other side is negatively charged. Interactions between dipoles are critical to biology -- for instance, the way large protein molecules fold -- often depend on how the electric charges of dipoles attract or repel each other.

Understanding the effects that dipole coupling might have on chromophores might help shed light on photosynthesis and light-harvesting applications such as solar energy. However, probing these interactions requires imaging chromophore activity with atomic levels of precision. Such a task is well beyond the capabilities of light-based microscopes, which are currently limited to a resolution slightly below 10 nanometers or billionths of a meter at best, said Guillaume Schull, a physicist at the University of Strasbourg in France. In comparison, a hydrogen atom is roughly one-tenth of a nanometer in diameter.

Instead of relying on light to illuminate and image chromophores, scientists in China used electrons. Scanning tunneling microscopes bring extremely sharp electrically conductive tips near surfaces they scan. Quantum physics suggest that electrons and other particles do not have one fixed location until they interact with something else, and so has some chance of existing anywhere. As such, electrons from the microscope's tip can "tunnel" to whatever the microscope is scanning. A fraction of these electrons lose energy during tunneling, which gets emitted as light that the microscope uses to image targets with atomic-scale resolution.

The researchers experimented with chromophores made of a purple dye known as zinc phthalocyanine. These chromophores were each about 1.5 nanometers wide, and they shone red light when the microscope excited them.

The scientists used the microscope's tip to push chromophores together. When the chromophores were roughly 3 nanometers apart, the spectra of light they gave off began shifting.

"I was quite surprised by the dramatic spectral change when two isolated molecules were simply pushed together," said study co-senior author Zhenchao Dong, a physical chemist at the University of Science and Technology of China in Anhui.

The research team's theoretical simulations suggest these changes were a direct visualization of dipole coupling between the chromophores.

"Dipole-dipole interactions play an important role in many biological and photophysical processes. To my knowledge, it is the first time that one has directly imaged them with sub-molecular resolution," said Schull, who did not participate in this study. "This is really impressive."

The scientists experimented with clusters of up to four chromophores. The varieties of light from these chromophores suggested they might have been entangled. Future research can explore dipole coupling in more complex arrangements -- for example, in 3-D systems, Dong said. He and his colleagues detailed their findings in the March 31 issue of the journal Nature.

By analyzing how molecules interact and exchange energy, "the most important implication of these findings is the possibility to understand and therefore engineer molecular structures for efficient solar-energy conversion devices," said  Elisabet Romero, a biophysicist at VU University Amsterdam, who did not take part in this research. A better understanding of dipole coupling might also yield insights into the function of structures of molecules such as catalysts, Romero added.