Skull was donated by an Inuit hunter in 1990.
Image 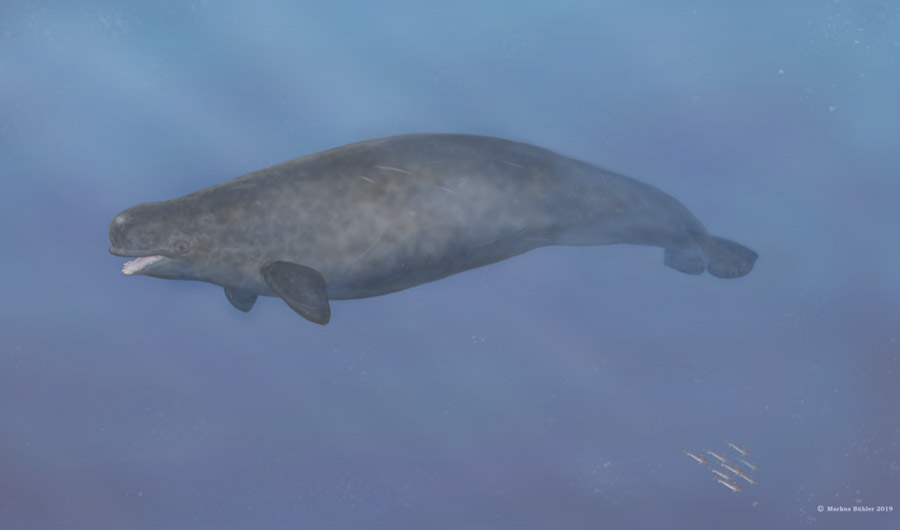 An illustration of the potential hybrid.

(Inside Science) -- A mysterious whale skull came from the first and only known hybrid of a beluga and a narwhal, a new study finds.

An Inuit hunter caught three unusual whales off the coast of western Greenland in the mid-1980s, donating the skull from one of his prey to the Natural History Museum of Denmark in 1990. Only two toothed whale species are found in arctic waters year-round -- the white beluga whale, and the narwhal. The latter is best known for the long tusks sported by its males, and rarely females, that resemble unicorn horns. Oddly, the whales the hunter caught had pectoral flippers like those of belugas but a tail shaped like that of a narwhal.

In addition, whereas belugas have up to 40 blunt peg-like teeth in both jaws and narwhals have no teeth in their lower jaws, the skull the hunter donated had pointed teeth on its lower jaw. "The skull just looks super-weird," said study senior author Eline Lorenzen, an evolutionary biologist at the University of Copenhagen in Denmark.

The scientists compared DNA from the skull's teeth with that from eight live belugas and eight live narwhals from the same area in western Greenland where the skull was found. Their analysis suggested the specimen was 54 percent beluga and 46 percent narwhal.

By investigating the chromosomes detected in the specimen, the scientists deduced it was male. The DNA of the mitochondria, which are inherited solely from females, suggested the hybrid's mother was a narwhal.

Prior work discovered hybridization is not uncommon between whale species, and researchers have previously spotted belugas among pods of narwhals and vice versa. Moreover, both species are 3.5 to 5.5 meters long, and mate in the spring as the sea ice breaks up and they migrate toward their summering grounds.

Oddly, the hybrid possessed a skull larger than either a beluga's or narwhal's. Gigantism is not unusual in hybrids such as ligers -- hybrids of a male lion and female tiger -- "perhaps because of how genes turn off when two different species hybridize," Lorenzen said.

As climate change reduces arctic sea ice, belugas and narwhals may come in contact more often, and so more interbreeding might occur, Lorenzen said. The researchers are now examining dozens of beluga and narwhal bones up to 50,000 years in age to find any prior traces of interbreeding. "It would surprise me if the only hybrid between belugas and narwhals happened to end up in a natural history museum," Lorenzen said. "There must be more."

The scientists detailed their findings online June 20 in the journal Scientific Reports.