By mimicking the diabolical ironclad beetles' wing cases, engineers may be able to build stronger joints for applications such as airplanes.
Image 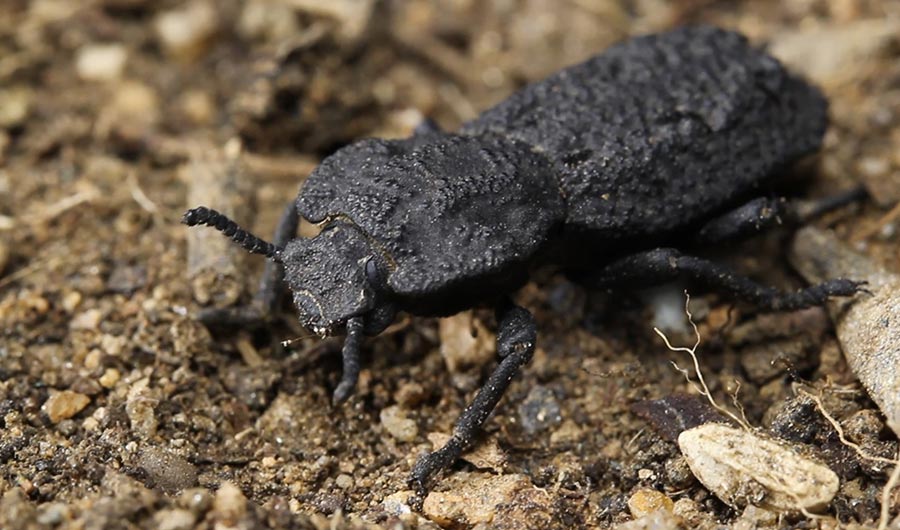 (Inside Science) – The diabolical ironclad beetle can survive getting run over by a car. Now, scientists have unlocked the secrets of its armor's strength -- research that may one day help improve aircraft, cars and drones.

Ironclad beetles are renowned for wing cases strong enough to bend the steel pins that researchers normally use to mount insects on displays. Scientists have suggested these flightless insects likely evolved such powerful shells because they could no longer use flight to flee predators.

Researchers focused on the diabolical ironclad beetle (Phloeodes diabolicus), a fungus-eating desert insect found primarily in the southwestern United States. The beetle's wing cases no longer open for flight -- instead, they have permanently fused into formidable armor.

Mechanical tests revealed the insect's wing cases could withstand forces of up to 149 newtons, equivalent to being pressed under a 33.5-pound weight -- roughly 39,000 times its body weight. (A 200-pound man would have to endure 7.8 million pounds to equal a similar load.)

Analyzing the sutures that locked the two wing cases together revealed they resemble the interlocking pieces of a jigsaw puzzle. One might normally expect such puzzle pieces to snap when too much weight is applied to their "necks," or thinnest parts. However, when extreme force is exerted onto these sutures, they do not experience catastrophic failure. Instead, the sutures experience gradual layered fracturing. This is because of the way in which a protein matrix laminates the layers of microscopic chitin fibers that make up the bulk of the wing cases.

The scientists reasoned these findings might lead to better mechanical fasteners for joining different materials, such as plastics and metal, in turbine blades, aircraft landing gear and other demanding applications. They constructed fasteners using carbon fiber-reinforced plastics that imitated the interlocking geometric structures observed in the beetle. Mechanical tests revealed these designs possess enhanced strength and substantially increased toughness compared to standard aerospace fasteners. Such advanced fasteners could one day fuse aircraft segments together without the use of traditional rivets and joints.

"We see a lot of potential applications -- not just in aerospace, but also in the automotive industry, and in drones," said study senior author David Kisailus, a materials scientist at the University of California, Irvine.

The scientists detailed their findings in the Oct. 22 issue of the journal Nature.