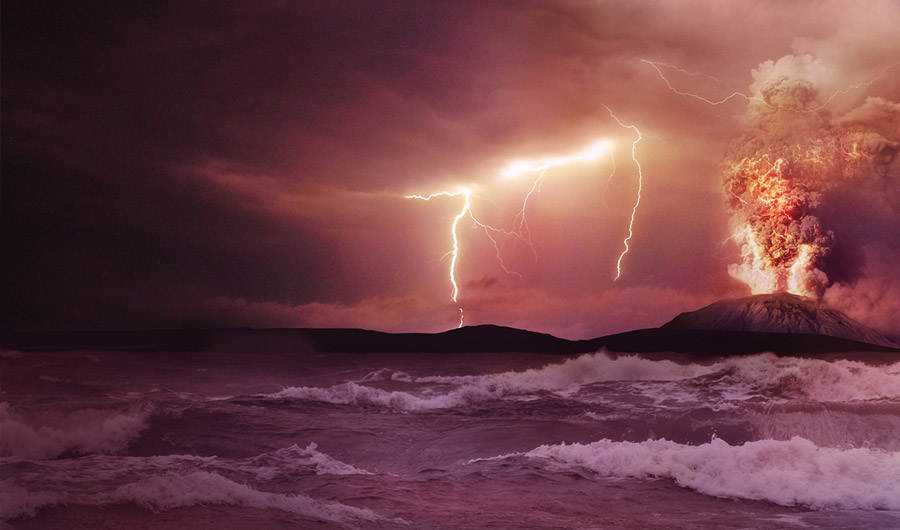 Artist's conception of an early Earth.

(Inside Science) -- In the 1990 Michael Crichton novel "Jurassic Park," scientists resurrect extinct species, with disastrous, page-turning consequences. But what if the scientists hadn't wanted to re-create whole organisms, just a part of their long-lost molecular machinery? This is in essence what real-life researchers report they have done in a new paper published online Oct. 22 in the journal Nature Catalysis.

The molecular machinery in question are proteins called enzymes, and they are life's answer for how to speed up chemical reactions like the digestion of food or the breakdown of toxins.

Engineers are interested in using these versatile natural machines to speed up industrial chemical reactions in environmentally friendly ways. Unfortunately, enzymes tend to unravel in the harsh conditions often used in commercial processes.

In a quest for more robust enzymes, a team of researchers from Australia, Europe and China turned to an earlier page in life's history. Previous research from a different group had suggested that bacterial enzymes from the Precambrian era -- which encompasses all of Earth's history before a diversity of life exploded about 540 million years ago -- function best at temperatures around 60 degrees Celsius (140 F), likely because the bacteria lived in environments at this temperature.

In the new research, the team used the same basic technique to resurrect additional ancient enzymes from both before and after multicellular life emerged on Earth. The enzymes themselves are long gone, but the scientists studied the genes of many different species that have a modern version, and then used a computer algorithm to take a best guess at how the genes evolved and what the most likely form in a common ancestor would look like.

Using this process, the researchers resurrected an enzyme that the first vertebrate animals likely used to help eliminate foreign chemicals from their bodies, as well as an enzyme that likely helped ancient bacteria make the building blocks for proteins. Modern relatives of both enzymes have attracted industry interest, the first for its potential to aid drug development and make specialized chemicals such as flavors and fragrances, and the second for its potential use in making biofuels.

The ancient enzymes showed significantly higher heat tolerance than the modern versions, as well as other useful properties such as the ability to better withstand solvents. This was true even for the enzyme from the first vertebrates, who lived in conditions not as dramatically different from today as those faced by earlier lifeforms. The enzyme's thermal stability may have been carried over from a time when the ancestors of vertebrates lived in oceans that could have gotten as hot as 60 C or more, the researchers write.

"It is a very interesting approach to the engineering of enzymes -- looking back in time rather than just looking at organisms that are living now in extreme environments," said Emilio Parisini, a chemist at the Italian Institute of Technology in Milan who was not involved in the research. His group also studies how to make modified enzymes with useful industrial properties.

The study authors argue that ancient enzymes could serve as stable templates from which to run directed evolution experiments of the type that were recognized by the 2018 Nobel Prize in chemistry. "Mutations such as those introduced for directed evolution will often destabilize a protein, so it helps to begin the directed evolution experiment from a more stable starting point," Elizabeth Gillam, a biochemist at the University of Queensland in Brisbane, Australia, and one of the authors of the new paper, wrote in an email to Inside Science.

In short, ancient enzymes could help put scientists on a path toward cleaner, more sustainable chemistry -- a tantalizing prospect, and one that doesn't bite back.