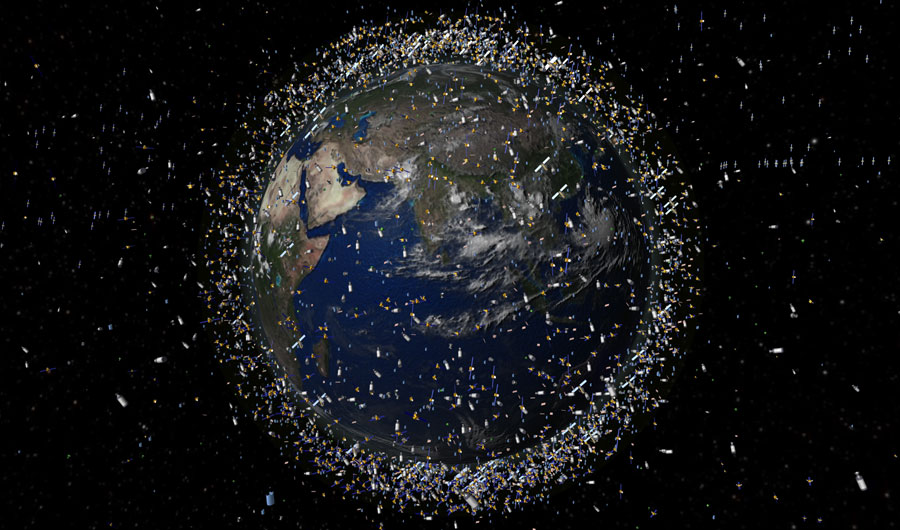 An artist’s depiction of objects currently in low-Earth orbit, shown at an exaggerated scale to make them visible at the scale shown.

(Inside Science) -- Thousands of known pieces of debris already clog low Earth orbit, with many more expected as research and commercial projects begin to launch swarms of small satellites known as CubeSats.

David Palmer, an astrophysicist at Los Alamos National Lab in New Mexico, and his colleagues are working on a way to keep tabs on the growing space traffic. Palmer normally studies pulsars -- distant celestial bodies that emit regular pulses of radio waves -- but he realized that their low-power signals could be a model for tracking human-made objects in space. This inspired Palmer and his colleagues to develop postage stamp-sized beacons for satellites that are uniquely identifiable, like license plates in space. These devices, if successful, could become ubiquitous in the industry and help address the worsening problem of proliferating space junk.

"We're looking to get it out of the experimental phase. In the next couple years, people will want them for their own satellites. If all goes well, maybe in five to ten years, there will be requirements that everything that goes into space has to have one of these," Palmer said.

This space license plate, called an Extremely Low Resource Optical Identifier (ELROI) by Palmer and his colleague Rebecca Holmes, uses flashes of laser light at a precise frequency and pattern to give its satellite host a serial number. It can be attached to anything and comes with its own solar panel for an independent power source, so that it can keep on running even if the satellite itself no longer functions. Palmer and Holmes recently published a description of the device in the Journal of Spacecraft and Rockets, and they're aiming to launch the first test model with a New Mexico Tech satellite in late September.

In space, even a collision from a single bolt can significantly damage a spacecraft, creating even more debris in its wake and over time rendering certain orbits completely unusable, like in the 2013 movie Gravity. However, unlike the right of salvage in maritime law that allows people to collect trash from the ocean, current international space law requires would-be space junk collectors to identify the ownership of any material orbiting Earth and request their permission to clear it away. The ability to identify objects in space could keep better track of the objects that are racing around Earth's orbit and reduce the chance of collisions.

"Active debris removal isn't a panacea: it takes a lot of energy to move from one object to another and take it out of orbit. It's an impractical, intractable problem," said Andrew Abraham, a senior member of the technical staff at The Aerospace Corporation in Chantilly, Virginia.

Abraham and his team are working on a playing card-sized transponder for spacecraft that uses GPS signals, modeled after current systems used by aircrafts. Even though their transponder is slightly larger than their competitor, ELROI, it can be tracked in the daylight unlike the laser-based ELROI and does not require clear skies for maintaining contact. They are also aiming for their first launch sometime next year.

Since neither device can be affixed to already orbiting flotsam, they will not help in reducing the amount of space junk already up there, but can make managing space traffic easier in the future -- at least in two specific ways, according to Daniel Scheeres, an expert on aerospace engineering and satellite navigation at the University of Colorado.

"It can take a while for deployed CubeSats to be properly identified, since they're really just points of light that are hard to see. This could really speed that up," Scheeres said. Furthermore, despite the fact that an object's trajectory becomes more uncertain over time, these devices make it possible to match an observation of an object today with an earlier one, making it easier to keep track of each satellites' orbit, according to Scheeres. They could also aid their eventual removal after their power runs dry.

But the best thing to do? Try not to create more junk in the first place, Abraham argued.

"Deactivate a satellite at the end of its life, get rid of stored propellant and drain the battery, which could explode," then put the defunct satellite in a 'graveyard' orbit far away from operational orbits, or simply let it fall and burn up in the atmosphere, he said.

Editor's note (08/01/2018): This story has been updated to correct the location of the Aerospace Corporation office where Andrew Abraham is based. We regret the error.

Editor's note (08/07/2018): This story has been updated to correct a detail concerning the operating mechanism of the transponders. We regret the error.