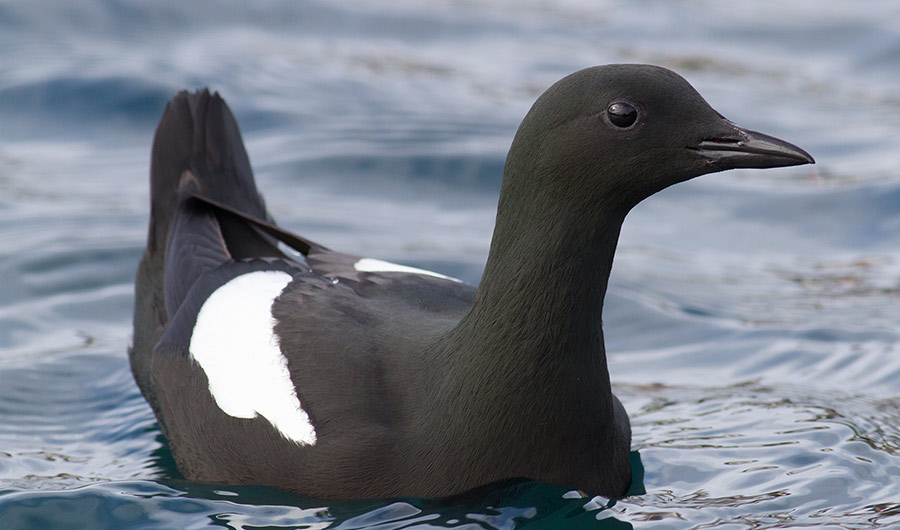 (Inside Science) -- Each winter, sleek seabirds known as Mandt's black guillemots descend on the ice that forms over the Bering Sea between Alaska and Russia. They spend the season diving under the ice to catch Arctic cod and resting on the frozen surface. But last winter, ice in the Bering sea was at record lows, forming later and melting far sooner than usual.

According to ornithologist George Divoky, this loss of winter sea ice could be "the final nail in the coffin" for a colony of birds already struggling with other aspects of climate change.

The breeding colony in question is located on Cooper Island off the north coast of Alaska, and Divoky has been studying it for 44 years. Twenty-eight percent of the birds that left in the fall of 2017 never returned to the island -- the highest apparent overwinter mortality ever documented for the colony, up from around 10 percent in a typical year. And while hundreds of guillemots raised chicks on the island in past decades, only 50 pairs laid eggs this year. Half of those clutches were never incubated.

"I would see a pair on the nest site, and I would go, 'wait a minute, you guys have eggs.' And I'd open the [nest box], and the eggs would be cold," said Divoky. He described it as a "mass egg abandonment" -- something he had never seen before. He presented the findings earlier this month at the American Geophysical Union meeting in Washington.

The Cooper Island colony wouldn't be there at all if it weren't for Divoky. Cooper Island is flat, unlike the tall cliffs and rocky slopes where Mandt's black guillemots usually nest. But while surveying the Island for the Smithsonian Institution in 1972, Divoky found a few guillemots nesting beneath crates and pieces of wood left by the U.S. Navy in the 1950s. He turned over some more pieces of debris to make new nesting cavities, and guillemots immediately moved into them.

Recognizing the research opportunities that an accessible guillemot colony presented, Divoky returned a few years later to set out wooden nest boxes, eventually building up to around 200 boxes. Each year he would document the birds' family lives, traveling on his own dime when he couldn't get other funding. For the past seven years, he has also placed tracking devices on some of the birds so he could learn about their winter journeys to the Bering Sea ice.

Divoky has held a series of jobs with various research organizations over the past four decades, and quit them as needed so he could continue to spend his summers on Cooper Island. In 2002 when his work began receiving widespread attention, Divoky started a nonprofit called Friends of Cooper Island, and now he studies the guillemots with field assistants under the organizational name Cooper Island Arctic Research.

The Cooper Island guillemot colony thrived through the 1980s and '90s, said Divoky. But the birds' primary prey species, the Arctic cod, is closely associated with sea ice. As summers grew less icy, the birds struggled to find enough cod for their chicks. In 2003, the desperate parents began switching to less appetizing fish such as fourhorn sculpin.

"Chicks just reject [sculpin], and parents don't even like handling them," said Divoky. "I mean, I don't like holding them, because there are all these spines."

Then climate change began driving new predators and competitors into the guillemots' territory. Horned puffins, which used to be rare so far north, began regularly kicking guillemots out of nest boxes so they could use them instead. And polar bears that had lost their own icy feeding grounds began swimming to the island, tearing open nest boxes, and eating the chicks.

In 2011, Divoky replaced the wooden nest boxes with plastic versions that resisted bear attacks and had holes too small for puffins to enter. Then he continued monitoring the guillemots' responses to changing sea ice and prey availability. By the summer of 2017, the birds were clearly suffering, but he still thought they stood a chance. A few birds seemed able to handle the new conditions, and Divoky hoped those individuals would pass on their resilience to new generations.

Black guillemots as a whole are not endangered, but the subspecies Divoky studies is in serious trouble, and he said other colonies likely face many of the same challenges as the Cooper Island birds. "It was basically, they will either evolve or go extinct," said Divoky.

Then came the winter of 2017 to 2018, with far less ice in the Bering Sea than during any other winter since the first whaling vessel records in 1850. When Divoky collected his tracking devices from the birds that returned to Cooper Island this past spring, he saw that the birds had waited much later than normal to fly down to the Bering Sea, apparently because ice was slow to form. And when an unseasonal warm spell began melting the paltry ice cover in February, the birds flew back north to the Arctic Ocean, abandoning the Bering Sea two months sooner than usual.

It's not clear why so many of the birds that returned to Cooper Island failed to raise chicks, said Divoky. But he suspects the tough winter may have taken a toll on their health, even though most of the Cooper Island birds had normal body weights. They might have starved for seven months, then bulked up suddenly when food became abundant in spring, hiding deeper harm to their bodies, said Divoky.

"If you're a female that's going to lay eggs that are one-quarter of your body weight, you know, you've got to have it together," said Divoky. He estimates that only about 30 chicks survived to leave the island this year. 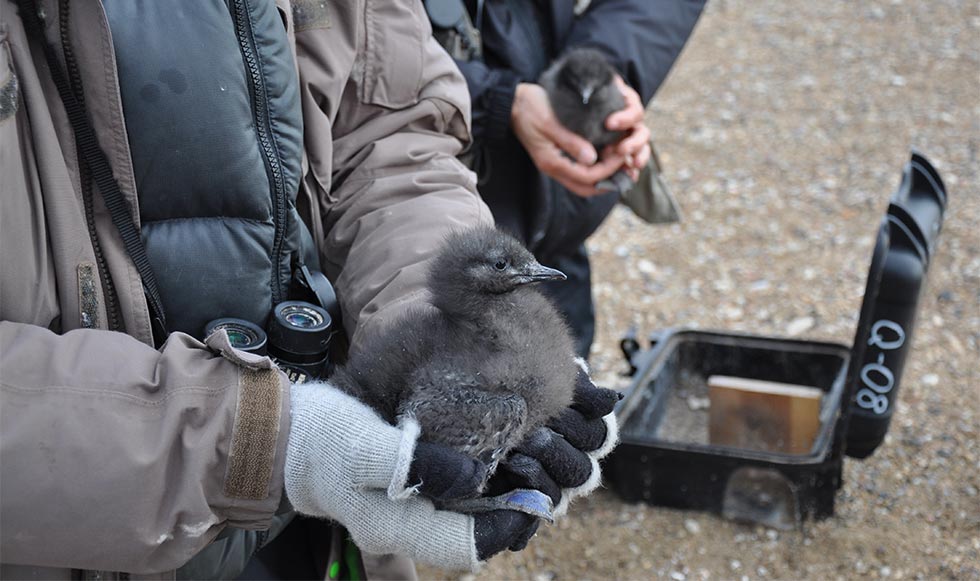 George Divoky cradles a guillemot chick in 2015 while a field assistant holds its sibling in the background. The chicks' nest box lies open on the ground.

Divoky never set out to study climate change. By the time the warming trend became a problem for the Cooper Island colony, Divoky had already been studying the birds for decades -- and that gave him the perfect baseline from which to measure climate impacts. Now, Divoky's guillemots are a famous case study representing the collapse of Arctic ecosystems.

David Ainley, a marine ecologist who worked with Divoky in the past but is not involved in the Cooper Island research, agreed that the project is about more than one seabird colony.

"It's not just that we're worried about guillemots," said Ainley. "George is providing an indicator of a changing ecosystem as a result of changing sea ice."

Ana Buchadas, an ecologist now at the Research Centre in Biodiversity and Genetic Resources in Portugal, has studied black guillemots and climate change, though she was not involved in Divoky’s research. The number of Divoky's birds that apparently perished last winter was "not surprising, but surely alarming," wrote Buchadas in an email. "Such findings have implications in other sea ice obligate species but also show the disruption that climate change can inflict in our ecosystems at large."

The fact that larger issues are at stake just makes the guillemots' plight that much harder for Divoky to witness. Each year he greets birds that he has known for decades and takes note of which ones fail to return. Last summer he watched as a dying chick lay gasping in the corner of the nest box.

"I started crying," he said. "In the past, an individual chick death didn't mean that much. And now it means a lot."