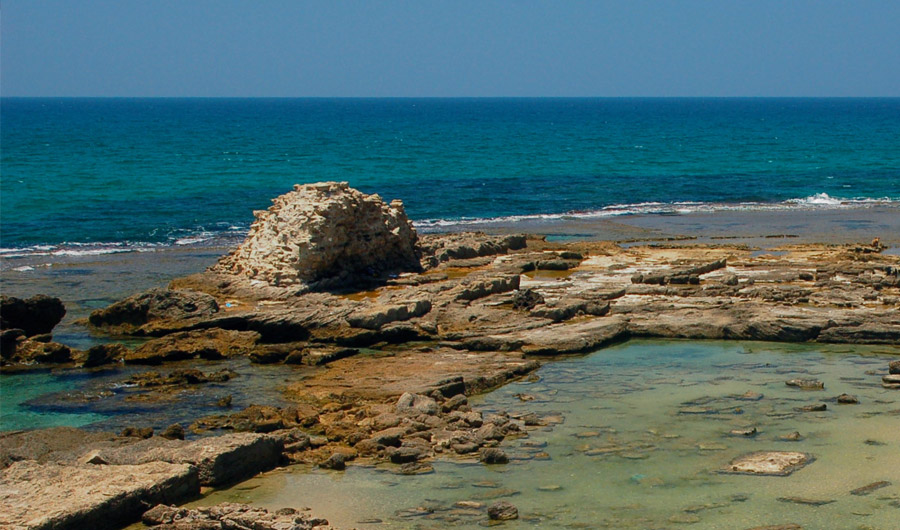 Ruins of a concrete Roman bath in Caesarea Maritima in Israel.

(Inside Science) -- Whereas modern concrete structures weaken and crumble in seawater, often within decades, Roman concrete seems to grow stronger in seawater. Some piers and breakwaters built at the dawn of the Roman Empire have endured for thousands of years. Now scientists are unlocking the secrets of how these ancient concretes have grown stronger over time, research that suggests that creating modern concretes the same way could not only build more durable structures but also generate much less of the global warming gas carbon dioxide.

Geoscientist Marie Jackson at the University of Utah in Salt Lake City began exploring Roman concrete during a sabbatical year spent in Rome in the 1990s. "My background was in volcanology, and Romans made concrete using volcanic ashes," she recalled. "I never gave concrete a thought beforehand, but my interest in Roman concrete really grew over time."

Romans created a mortar using lime, seawater and volcanic ashes known as pozzolans, named after the city of Pozzuoli on the Bay of Naples, near where deposits of these ashes were mined. When this mortar was combined with chunks of volcanic rock, the result was an extraordinarily resilient kind of concrete. Monuments such as the Pantheon and Trajan's Market in Rome, as well as marine structures that protected harbors from the open sea and served as foundations for piers and warehouses have lasted up to roughly 2,000 years.

In 79 AD, Roman naturalist and statesman Pliny the Elder wrote that when concretes of the day were exposed to ocean waves, they became "a single stone mass, impregnable to the waves and every day stronger." Now Jackson and her colleagues find this ancient observation was correct -- seawater helps Roman concrete heal and strengthen.

"It turns out a lot of the hunches that Roman authors had proposed for why these concretes set underwater actually have a basis in reality," said classical archaeologist John Oleson at the University of Victoria in British Columbia, Canada, who did not take part in this research.

The scientists used electron beams, X-rays from particle colliders and other tools to analyze samples of Roman concrete drilled from ancient harbors. Their findings suggest that when seawater percolated through pores within Roman concrete, it dissolved components of the volcanic ash, allowing new minerals to grow from the fluids. "We've discovered an unrecognized way in which these very long-lived concretes grow new mineral cements," Jackson said.

One of the minerals that form in Roman concrete, known as aluminous-tobermorite, grows in the form of interlocking plate-like crystals that reinforce the mortar holding the concrete together, healing flaws and boosting its resilience against fractures.

Aluminous-tobermorite is a rare mineral in nature that has proven very difficult to synthesize in the lab and also requires high temperatures above 176 degrees Fahrenheit to create, which makes it impractical for modern concrete to form that mineral once it has set.  In contrast, Roman concrete naturally synthesizes the mineral when infiltrated with seawater at temperatures of just 57 to 64 degrees F.

The researchers also noted that Roman concrete was created in a more environmentally friendly way than modern versions. The process for making Portland cement, a key ingredient of modern concrete, requires temperatures of roughly 2,640 degrees F, and the fuels burned to generate this heat are responsible for 7 percent of global carbon dioxide emissions. In contrast, making Roman concrete only requires temperatures of roughly 1,650 degrees F, demanding much less fuel.

"Using pozzolans in concretes could really help deal with the problem of carbon emissions today and extend the service life of concrete structures and pavements," said Thomas Adams, president and principal engineer at engineering firm KMR Collaborative in Reno, Nevada, who did not participate in this study. "Old technology developed in Roman times has a lot of applicability to today's marketplace."

Furthermore, as coal usage drops throughout the United States, concrete producers are scrambling to find replacements for the coal fly ash often used in modern concrete, Adams said. This new work "really shows how using naturally occurring pozzolans could help offset coal fly ash demand," he said. "Pozzolans have already had a long history in U.S. concrete production -- it wasn't until the 1960s when coal fly ash started taking over."

One concern regarding future applications of volcanic ash in concrete is that "we cannot take apart the Bay of Naples to build sustainable concretes around the world," Jackson said. Her research is now investigating whether common types of volcanic rock such as basalt or rhyolite can serve as modern substitutes for the pozzolans used in Roman concrete.

Jackson and her colleagues detailed their findings online July 3 in the journal American Mineralogist.