By hunting in the deep and dumping in the shallows, sharks deliver rich nutrients to coral reefs, helping them grow. 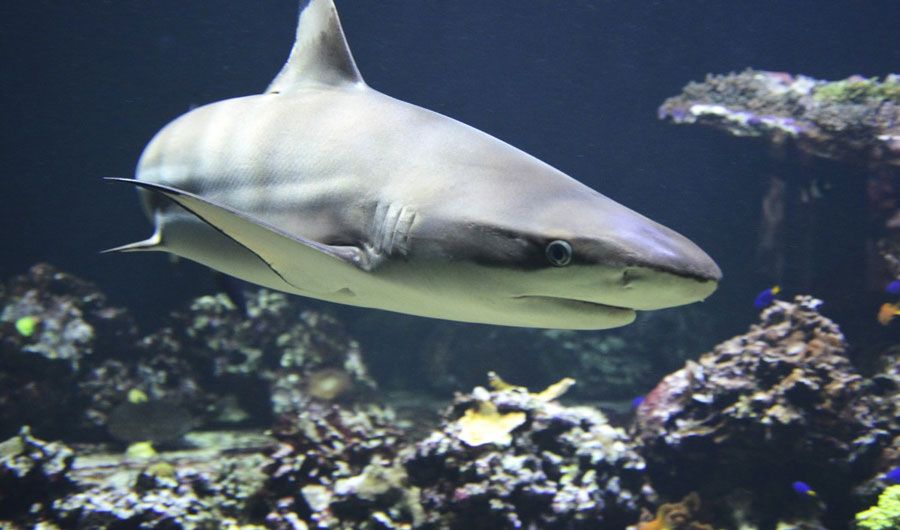 (Inside Science) -- Many sharks are alpha predators, and their hunting plays an important role in many offshore reef ecosystems because through feeding they keep the local fish populations in check. Now it turns out their feeding may help coral reefs on the other end of the food chain as well.

Sharks, those swarming scoffers of ocean seafood, are prolific poopers as well. And shark manure, according to a new paper published last month in the Proceedings of the Royal Society B, may be an important source of fertilizer for coral reef.

Palmyra Atoll is a remote wildlife refuge about 1,000 miles south of Hawaii. The atoll is small, less than 3 square miles, and lined with sandy beaches and palm trees. The refuge is only lightly touched by human activity -- fishing is banned and the only inhabitants are a handful of scientists and conservationists.

In contrast to the spare habitation on shore, the coral reef surrounding the atoll is a bustle of activity, home to colorful fish, crabs, sea turtles and more than 8,000 grey reef sharks.

Since 2010, scientists like David Jacoby have been tracking and collecting data on these sharks.

Scientists have known for some time that predators can positively affect the health of an ecosystem. Wolves help keep deer populations in check, for example, which can keep trees and shrubs from getting overbrowsed. The same principle applies on a reef.

But Jacoby’s team was interested in seeing if the sharks had other effects as well.

"What we were actually quite keen to understand was whether there was a more direct way in which reef sharks might be contributing to the health of the ecosystem." Jacoby said.

In particular, they wanted to know if the sharks were bringing life-sustaining nutrients like nitrogen to the reef. They knew that while grey reef sharks spend a significant amount of time at the reef, it’s not necessarily where they like to feed. According to Jacoby, the sharks actually seemed to prefer "pelagic," or open ocean, hunting grounds instead.

“The typical pattern we tend to see with these animals is that they hang around on the reef for a couple of days at a time. Then they'll go off on a foraging excursion to the pelagic environment, maybe for a night or two, then come back and maybe spend a couple more days on the reef," Jacoby said.

More shark stories from Inside Science:

The suggestion that they deliver loads of nutrients to the reefs in the process is backed up by previous studies that used isotope chemistry and established that 86 percent of the grey reef sharks’ diet might come from the open ocean. Jacoby and his team of scientists wanted to know how much of that open ocean nutrient load was coming back to the reef with the sharks.

To do this, they collected about four years' worth of data from 41 sharks that had been tagged with acoustical transmitters -- tiny devices that occasionally let out sonic pings. Using an array of underwater microphones, the researchers could track the sharks' movements, timing how long they spent in different areas and even watch them come and go like guests in a hotel.

Then, by combining these observations with feeding habit and digestion data from previous studies, the scientists could make a rough estimate of how much manure the sharks were producing, where they were dumping it, and how many nutrients were delivered in the process.

Jacoby’s team found that Palmyra Atoll’s shark population as a whole might be depositing more than 200 pounds of nitrogen to the reef per day -- a substantial contribution to the reef’s ecosystem. Nitrogen is an especially important nutrient, because the warm surface waters that typical reefs inhabit are fairly nutrient-poor.

“We wanted to understand something about why reef sharks are important,” Jacoby said. “And aside from regulating food chain dynamics, this is actually another role they appear to play in the health of the reef."

Jacoby and his team cautioned that the research only estimates potential poop delivery and does not give not concrete measurements, and many reef sharks do not hunt in this way. Nevertheless, this work has implications for the conservation of sharks and reefs alike, both of which are currently under pressure from human activities.

"Notoriously, sharks have been quite heavily fished in many parts of the world -- both in pelagic environments and particularly on reefs as well,” Jacoby said.

As many as a quarter of all shark and ray species may be threatened by extinction. This new work might give conservation efforts new ammunition.

“It's very promising for the work that I do in conservation,” said Rick MacPherson, a marine ecologist and founder of a conservation consulting agency. He was not involved in the research but said Jacoby’s team’s work builds evidence for connection between sharks and reefs that MacPherson said they’ve suspected but haven’t had hard numbers for.

If Jacoby’s research holds true, it seems that sharks may be needed for their nibble as well as their dribble.