Sharks are no better than other fish at sniffing blood in the water.
Image 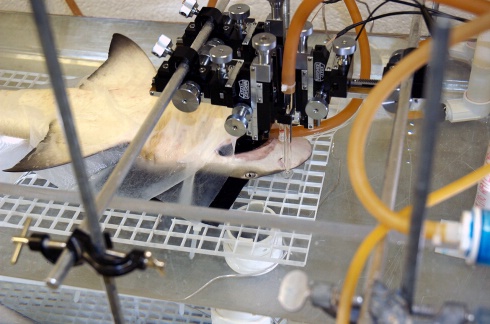 A shark waits for a squirt of smelly amino acids.

WASHINGTON (ISNS) -- Everyone knows that sharks have an amazing sense of smell. Toss a chunk of salmon into the shark tank at the Monterey Bay Aquarium in California, and you can see it in action.

"They know right away when the scent hits the water," said Erin Carter, an aquarist at the Monterey Bay Aquarium who works with several species of sharks. "If it's fresh food that’s just been delivered that morning from the dock, they'll just go nuts for it."

But can these aquatic bloodhounds really detect a drop of blood in an Olympic-sized swimming pool or a mile away in the ocean, as the popular legend suggests?

This myth smelled a little fishy to scientists in Florida, who decided to put it to the test. They found that sharks don't live up to their reputation in the movies, documentaries, and pages of scientific journals. Although a shark's sense of smell is extremely keen, it's no better than that of a typical fish.

"From what we know now, they can't smell a drop of anything in an Olympic-sized swimming pool," said Tricia Meredith, a biologist at Florida Atlantic University in Boca Raton.

Blood In The Water

The idea that sharks have the best noses in the ocean may be partly inspired by our fears of the toothy predators.

"People are afraid if they pee or bleed into the ocean, sharks are going to sniff them out and eat them," said Meredith.

In scientific circles, though, the shark's smelly reputation is based on its anatomy. Unlike human beings, sharks have separate openings for breathing and smelling. Gills on the sides of their heads capture oxygen in the water, while two nostrils at the front of the face pull water into a nasal chamber where smells are detected.

The amount of tissue in this cavity, folded over plates called lamellae, is huge in sharks compared to other fishes. Scientists have long thought that this greater surface area gives sharks a better sense of smell.

"It's a pretty logical jump to make, but no one had actually tested it," said Meredith.

To test this assumption, Meredith studied animals from five different species of elasmobranchii -- the scientific subclass that includes sharks -- captured in waters off the coast of Florida. They ranged from flat skates and stingrays to pointy-nosed lemon sharks and bonnethead sharks with hammer-like heads.

Each elasmobranch spent time in a tank with equipment attached to its nose: a tube that released 20 different kinds of amino acids -- the building blocks of animal proteins that lead sharks to their prey -- and an electrode that measured the electrical impulses in the nasal cavity generated in response to smells.

The recordings showed that, on average, sharks with more surface area in the folds inside their snouts were no better at detecting faint smells.

The five tested shark species had just about the same sensitivity as each other and as non-shark fish that have been tested in other studies. At their best, the sharks detected about one drop of scent dissolved in a billion drops of water.

One explanation for this is that being any more sensitive could actually confuse a shark. One part in a billion is roughly the natural background concentration of amino acids floating around in coastal waters. If sharks were adapted to detect smaller concentrations, it might be difficult for them to distinguish the byproducts of a potential meal from random bits of aquatic flotsam and jetsam.

"Imagine you were super-sensitive to sound, and you could hear whispering really well," said Meredith. "That would be awful if you always lived in a room with a stereo blaring."

When it comes to the myth of sharks having an unrivaled sense of smell, her conclusion is: "Myth busted."

But for Jelle Atema, who studies shark olfaction at Boston University, the myth is only mostly busted. Although impressed by the new research, he said that the science leaves a little room for further exploration.

The electrodes in Meredith's experiment work by adding up the entire electrical response of millions of smell receptors to a scent. Atema hopes to get a closer look by examining single cells -- some of which might be specialized to respond to certain smells.

"Pretend that these smell receptors are a singing choir," said Atema. "The choir itself may not be louder, but some voices may be singing louder than others if you listen closely."

Meredith's study focused on coastal sharks. Atema wonders if the same applies to sharks that live in the open ocean, where the background concentration of smells is lower.

His work has also shown that aquatic animals can detect extremely small concentrations of other chemicals that are not amino acids. Tuna can smell one drop of the chemical tryptophan -- a common compound in turkey meat -- dissolved in trillions of drops of water.

For now though, the best scientific evidence suggests an update to the popular myth: sharks can smell a drop of blood in a volume of water about the size of a backyard swimming pool. It's still impressive, but hardly as terrifying as Hollywood would have us believe.

The research was published this month in the Journal of Experimental Biology.