Male fireflies blink together to get a date.
Image 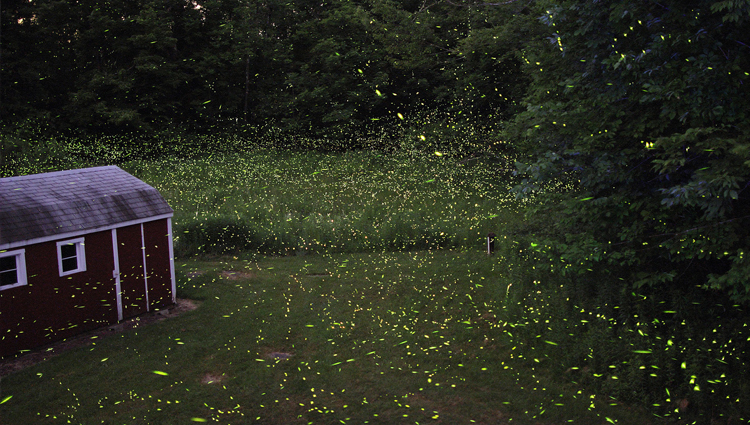 WASHINGTON (ISNS) -- For two weeks every June, busloads of visitors gather in the Smoky Mountains of eastern Tennessee for a sight that scientists once believed to be impossible: thousands of fireflies blinking in near-perfect unison, like strings of Christmas lights in the night air.

"From the right angle you can see an entire hillside flashing together," said Andrew Moiseff, a biologist at the University of Connecticut in Storrs. "It's one of those things that just makes you go 'wow'."

Researchers have long debated why these male Photinus carolinus fireflies work together to put on such a spectacular show, rarely seen outside of Southeast Asia. After nearly 20 years of visiting the woods in Elkmont, Tenn., Moiseff and firefly hunter Jonathan Copeland of Georgia Southern University in Statesboro have discovered the answer. The female bugs watching from the grass below demand it.

A male firefly's flash pattern is thought to be a request for a date, and each species uses a very specific pattern. Some keep it simple with one or two short pulses. Others perform elaborate aerial acrobatics and trace shapes with their tail lights.

For most fireflies, these flashes are strictly a one-bug show. Like drummers playing the same rhythm but starting at different times, each male insect does its best to impress, and the result is a field of chaotic light.

Female insects watch these shows with huge compound eyes, some of the biggest (compared to the size of their heads) in the insect kingdom. If one spots her species' pattern and likes what she sees, she calls back with her own pattern of flashes.

To study what P. carolinus females look for in their mates, Moiseff learned how to flirt like a firefly. He programmed eight light-emitting diodes to impersonate eight male fireflies. When he flashed these lights all together, in sync, females responded with their own "come hither" flashes more than 80 percent of the time. But when the lights were out of sync, they only responded 3-10 percent of the time, according to experiments published this week in the scientific journal Science.

One explanation for this behavior is that synchronized flashing cuts down on visual clutter and helps the females clearly spot the males' patterns. The night skies over Elkmont get pretty crowded, with lots of males in the same place at the same time.

"At their peak, the fireflies are very dense," said Moiseff. "Sweep a net in a circle, and you might catch five or six fireflies at once."

Marc Branham, a biologist at the University of Florida, Gainesville, said the coordinated fireflies are similar to frogs and crickets, creatures that sing together to produce a clearer sound.

"It's like being in a giant stadium," he said. "If everybody is yelling the same exact sentence randomly, it doesn't make any sense. But if everyone synchronizes, you can tell who's closer and who's farther away."

A hundred years ago, scientists believed the task of synchronizing flashes to be too complicated for the tiny brains of fireflies -- which are not flies at all, but a type of beetle. They doubted the first reports of synchronous insects in Southeast Asia, and one traveler even refused to believe his own eyes. After seeing miles of insects blinking in unison along a river bank, he wrote that the experience must have been an illusion caused by his own blinking eyelids.

So when Copeland received a call in 1993 from Knoxville resident Lynn Faust -- who claimed to have seen similar insects outside her Elkmont cabin every summer -- he was skeptical.

Copeland had spent time with the synchronous fireflies that light up the mangrove trees of Malaysia and Indonesia. But no legitimate sightings had ever been reported in the Western Hemisphere.

"We've gotten some crackpot reports that were kind of crazy," said Copeland. "Some people have called us and said they had seen synchronized fireflies. Sometimes they also said that these fireflies were actually space aliens."

He asked Faust to imagine the insects' flashing lights as musical notes and to send him a drawing of these notes on a piece of sheet music. The notes in her sketch seemed to line up correctly.

Over a few summers, Copeland and Moiseff brought cameras and sensitive light detectors to Elkmont and confirmed what the Faust family had been enjoying for decades -- P. carolinus fireflies blink within a tenth of a second of each other, in a repeating pattern of six flashes every three seconds.

To mathematician Steven Strogatz of Cornell University in Ithaca, N.Y., these firefly patterns are part of an emerging science of synchrony, which studies the tendency for things in nature to fall into the same rhythm. The same mathematical equations that describe firefly behavior, he said, also describe how the cells of the human heart sync up to produce a constant heartbeat and why two pendulum clocks hung close to each other on a wall will start to swing in same rhythm.

"Synchrony occurs at every scale of nature, from subatomic particles to the whole universe," said Strogatz.

Recent computer simulations have shown that large groups of creatures can coordinate seemingly complex activities by following very simple rules. Schools of fish and flocks of birds can suddenly turn, all at once and without a leader, simply by paying attention to what their neighbors are doing.

Tennessee's synchronous fireflies are also thought to coordinate their shows by watching each other. Obstacles such as rocks, trees, hills can break up the show into patches here and there and create moving waves of light.

The scientists hope to eventually take a peek inside of the insects' brains and figure out how they are wired for synchronization. Until they do, though, Elkmont's captivating light show will remain an incompletely-understood mystery -- and of one of Tennessee's best-kept summer secrets.