Scientists argue non-toxic alternatives such as steel would keep many tons of lead out of the environment each year. 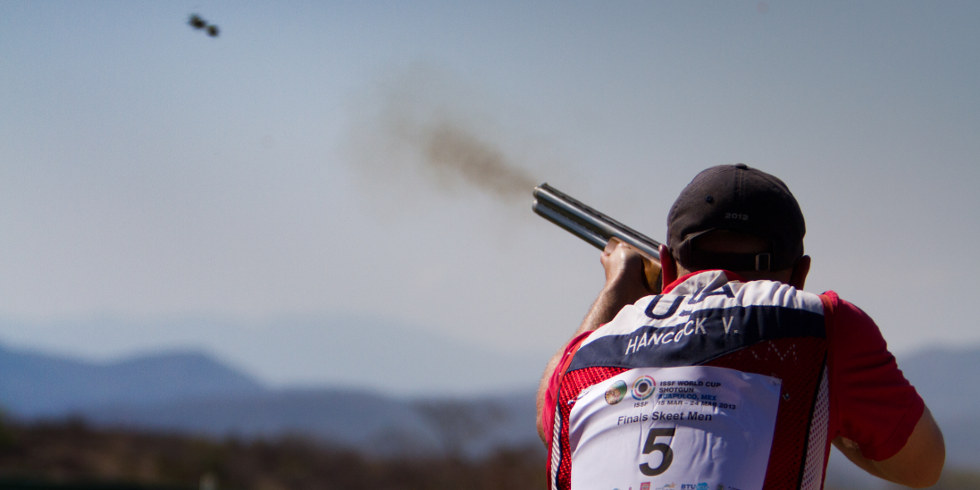 (Inside Science) -- At this year's Olympic Games, skeet shooter Kim Rhode will be aiming to make history. Again. In 2012 in London, she became the first American athlete to medal in five consecutive Olympics in an individual sport. In Rio, she'll be shooting for six out of six.

Rhode will be focused on firing her shotgun at the clay pigeons whizzing through the air, but some scientists have set their sights on another target -- the lead pellets from spent cartridges that tumble out of the sky along with the shards of clay.

At many outdoor shooting ranges worldwide, they argue, the lead shot is often left where it falls, potentially contaminating water as well as posing a toxic risk to the creatures that ingest it.

Currently, five Olympic events -- men's and women's skeet and trap and men's double trap --require lead shot, which is composed of tiny orbs that shatter clay targets more easily than single bullets. (Lead bullets and airgun pellets, used in rifle and pistol events, are typically shot into special traps behind the targets, and, for the most part, don't enter the environment.)

The lead shot can pose a particular danger to birds, which may mistake the pellets for food or "grit," small stones they consume to aid digestion.

Concerned about these potential environmental threats, a team of researchers has urged the International Olympic Committee to require non-toxic, lead-free gunshot for Olympic events and qualifications.

It's not the shooting events during the Olympics that pose the real environmental hazard, but the extensive training and qualification events between the games, said Vernon Thomas, a retired wildlife biologist from the University of Guelph in Ontario and one of the main proponents of a lead shot ban. While only a handful of athletes compete in the Olympics and the spent pellets are now collected and recycled, outdoor shooting ranges where athletes train often leave pellets on the ground because of the cost and difficulty of recovering them, he says.

Lead shot scattered on the ground

"Think of it as an enormous pyramid," said Thomas. At the tip, there are the Olympic shooters. "But below that, you have all the hopefuls in all of the nations across four years who are hoping to become Olympic shooters," he said. (In Rio, 390 athletes from 97 countries have qualified to participate in the shooting sport events.)

In a study in the journal AMBIO in 2013, Thomas and his colleague Raimon Guitart, a toxicologist at the Autonomous University of Barcelona, estimated that an individual athlete training for the Olympics fires off about 1,000 cartridges a week, which translates to a little over a ton of lead entering the environment every year. (An article from 2011 in the New York Times reported that Rhode's training involves shooting 500 to 1,000 rounds each day, typically seven days a week.)

In all, thousands of tons of lead shot are discharged by Olympic shooters during training, according to the study.

"I wasn't aware of the issue with [lead shot's] use in Olympic shooting sports. That was under my radar ... I think [Thomas] builds a pretty good case that there's significant concern," said Barnett Rattner, a United States Geological Survey ecotoxicologist in Beltsville, Maryland who has studied the effects of lead shot on wildlife in hunting.

According to the Olympic Charter, "the IOC's role is ... to encourage and support a responsible concern for environmental issues, to promote sustainable development in sport and to require that the Olympic Games are held accordingly."

Requiring shooters to use lead shot, said Thomas, is out of step with those goals.

According to Thomas, he's alerted the IOC to his research over the years, from 1993 to 2000 and again in 2013, including sharing one of his papers, published in the journal Environmental Policy and Law that detailed policy options for the IOC for dealing with lead shot at the Olympics.

In his last communication with them, he said, the IOC maintained that the issue was not for them to deal with and suggested any further correspondence be sent to the International Shooting Sport Federation, the organization that oversees all Olympic sport shooting, which is based in Munich.

When reached for this story, the IOC responded similarly, writing in an email that the ISSF should be contacted directly, "as they are responsible for their rules and regulations of their sport at the Games."

In an email, Marco Dalla Dea, an ISSF media officer, wrote that the federation was "very familiar" with the topic. But, he continued, "there are currently no suitable, affordable alternatives to lead shot for [s]hotgun competition events."

Ammunition manufacturers do make non-toxic alternatives including shot made out of other metals such as bismuth, tungsten and steel.

But, opponents say, those shot loads are more expensive than lead, less effective at breaking the clay targets, and potentially damaging to the gun because the metals are harder than lead.

Thomas disagrees. "Here is a sport that can make an easy transition to non-toxic shot, particularly steel shot, without upsetting the nature of the sport," he said. "I've done a large amount of clay target shooting with steel shot, so I know of what I speak."

According to Tom Roster, an independent shotgun ballistics expert in Oregon, the cost of producing steel shot used to be more expensive than lead, but that's not the case anymore. That's because the overall world demand for lead has been increasing for at least a decade, effectively erasing the difference in cost, he said.

As for performance, "there's nothing in practice or that's ever been tested that shows that steel pellets of the right size are inferior to lead pellets for breaking these clay targets," he added.

The shot won't ruin modern guns either, he said, in part because a piece of plastic or biodegradable material called a wad encapsulates the shot and protects the gun's barrel.

"There's really nothing to worry about," he said. "It's just fear of the unknown." 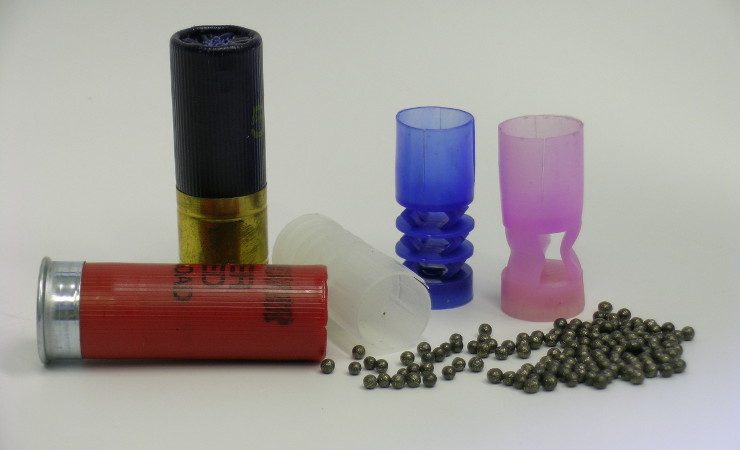 Milton Friend, a retired wildlife biologist with the USGS National Wildlife Health Center in Madison, Wisconsin who has worked on issues of lead poisoning in wildlife from lead ammo used in target shooting and hunting since the 1970s, made the same argument. "The non-toxic shot that's made today is of superior quality," he said.

In the late 1950s and early 1960s, Friend shot in rifle events as a member of the U.S. Army Marksmanship Unit, which supplied shooters for international competitions such as the Olympics. He didn't participate in the games, but a number of his teammates did. While he recalled his former teammates fondly, the same couldn't be said about the lead.

"I wasn't concerned about lead shot back then. I didn't know any better," he said. "When you start working on it and getting involved with hundreds and thousands of birds dying needlessly, it gets to you."

Rather than banning lead shot in shooting sports, the ISSF works with its member federations "to develop and promote lead management best practices," said Dalla Dea.

The Environmental Protection Agency provides a guide that details such practices.

"In the old days, there was no clean up," said Roster. But now, "clay target ranges do what’s called lead shot mining," contracting with companies that collect and sort the pellets to sell as reclaimed lead shot, he said.

Still, said Thomas, many outdoor shooting ranges are on land that isn't suitable for other human uses -- over water, wetlands, or rough ground -- from which "it is virtually impossible to reclaim the lead."

He did note that at several large ranges in the U.S., the shooting takes place over very flat, sandy soil including where the national trap shooting events are held every year. There, it's possible to use mechanical harvesters to pick up the shot, but those locations are the exception, not the norm, he said.

Even though an enormous amount of clay target shooting takes place worldwide, Thomas has continued to focus on the Olympics, hoping that a win at its level "would be a very strong precedent for demanding or requiring similar actions in other sporting events," he said.

Despite the lack of response from the IOC, Thomas and his colleagues, who fund their own research, aren't giving up.

Earlier this year, Thomas and Guitart published another paper in Environmental Policy and Law urging the Food and Agriculture Organization, the U.N. Environment Programme and the World Health Organization to "promote a global reduction of lead use in hunting and outdoor shooting." Such a move would improve the health of humans and wildlife, they argued, and align with the organizations' extensive efforts to reduce lead -- from gasoline, paints and other sources -- in the environment.

The UNEP, which partners with the IOC to incorporate environmental issues into the Olympics, did not respond to requests for comment.

For his part, Friend, who is 80, is still hoping to see a change in his lifetime.

Using lead shot, he said, means "making a choice to willingly poison the environment when it isn't necessary to do so … I just wish we could sit around a table, have an enlightened discussion and move on."