Simultaneous Blazes, Like California's Camp and Woolsey Fires, Have Become the New Normal

Simultaneous Blazes, Like California's Camp and Woolsey Fires, Have Become the New Normal 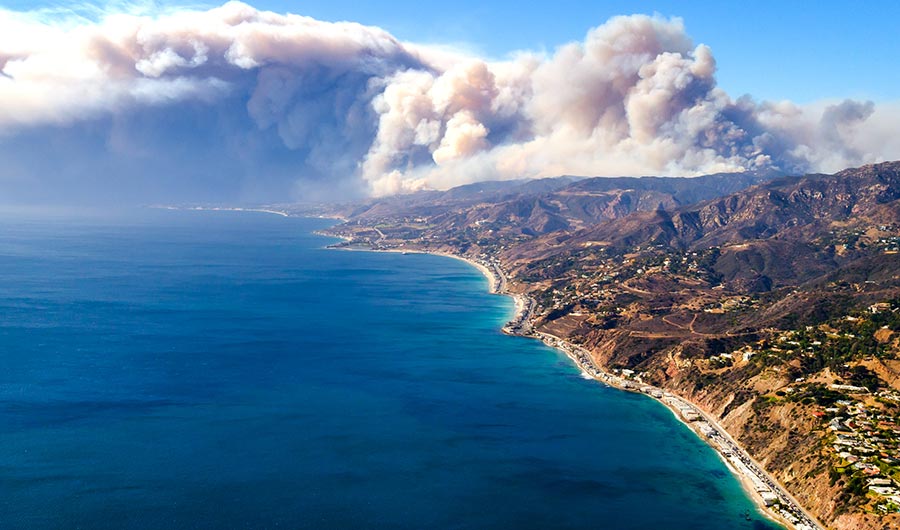 (Inside Science) -- Just a few weeks ago, two large wildfires caused massive destruction and at least 91 deaths in California, the Woolsey fire near Los Angeles and the Camp fire that engulfed the town of Paradise in the north. Residents and firefighters struggled to stop both fires, yet they can expect more like them to come.

Simultaneous large fires are becoming more common throughout the continental United States, according to new research presented by Alison Cullen today at the Society for Risk Analysis conference in New Orleans. The trend puts a strain on resources and will put more people living in wildland areas in danger.

“The reason we care about simultaneity is because when you have multiple fires at once, there’s so much demand and competition for the personnel who are going to fight fires or try to manage them and where they and their equipment will be sent,” said Cullen, an environmental policy scientist at the University of Washington in Seattle.

She and her colleague, Harry Podschwit, logged all major fires in the lower 48 states and compared them between 1984 to 1999 and 2000 and 2015. They divided the territory into nine geographical areas, and then they looked at different fire definitions, such as fires above some size threshold or in the top 10 percent in that region. While a 10,000-acre fire counts as large in the Northeast, the Camp and Woolsey fires scorched about 150,000 and 100,000 acres respectively, though neither are in California’s top ten in recorded history, according to Calfire.

“What we found is, across nearly all the definitions in nearly all the regions, there was a significant increase in the level of simultaneity in the second time period,” Podschwit said.

For example, in the Southwest, the satellite record revealed only two incidents of wildfires that burned more than 50,000 acres during the first time period. But then 34 separate fires of that size burned in the area in the following 15 years -- including an instance when five blazed simultaneously, in April and May 2011, Cullen and Podschwit found. They’re submitting their study for peer review in the next few weeks.

Their findings build on those of the federal government's latest National Climate Assessment, released on Nov. 23. The nation’s top climate scientists found that wildfires are growing in frequency, intensity, extent and duration, and we can expect more large wildfires in the next half century, especially in the Western states. Furthermore, the study said that since 1984, climate change caused fires in the West to burn twice the area they would have without it.

“Climate change increases the natural variability, such as with precipitation. When you combine that with warmer temperatures, you ramp up your vulnerability,” Westerling said. In the Sierra Nevada mountains, more precipitation now comes as rain rather than snow, making for earlier snowmelt and a longer fire season. But these different factors vary around the country, Cullen and Podschwit find, since, for example, the Eastern U.S. experiences more summer rainfall, reducing fire risks.

While scientists have become more confident in their ability to attribute some extreme events, like major wildfires, to climate change, public views vary more widely. Political ideology remains the best predictor of climate change views, and people are loathe to change their minds, according to a recent study by Hilary Boudet, an Oregon State sociologist. Nevertheless, when an extreme event devastates a community and local officials frame it as a climate change-driven event, like the 2015 fire in Lake County, California, some people do modify their views.

To help people prepare for the next fire, scientists have begun developing “fireshed” maps, analogous to watersheds. These locate the places most likely to ignite and where the fires will likely spread. Such maps could inform where people choose to build -- or where to rebuild after a fire.

But while people have begun considering retreating from hurricane flood zones or eroding coastlines threatened by sea level rise, discussions about building in fire-prone wildland areas haven't coalesced in the same way. And by their presence, people inevitably start more fires in the wildlands if they live there, too.

“Accidental fires can happen because your car is overheated on the side of the freeway, or somebody throws a cigarette butt out the window, but they can also happen just because someone has a chain hanging out the back end [of their car], and it causes a spark that lands at the wrong time and place, and boom, you have a fire,” said Natasha Stavros, a fire ecologist and engineer at NASA’s Jet Propulsion Laboratory in Pasadena, California.

We have a different relationship with fire than with other extreme weather, since for example, no one ever talks about trying to stop a hurricane, she pointed out. “The Camp Fire was burning at 80 acres per minute -- that’s 61 football fields per minute. Why do we think we can control that?”

Is Voting by Mail Biased, Returning to Work After COVID-19, Maple Trees Disappearing