Six Morbidly Fascinating Creatures You Might Find at the Beach

Six Morbidly Fascinating Creatures You Might Find at the Beach

Read on to learn about strange seashore phenomena, from cannibalistic shark embryos to worms whose butts become autonomous sex machines. 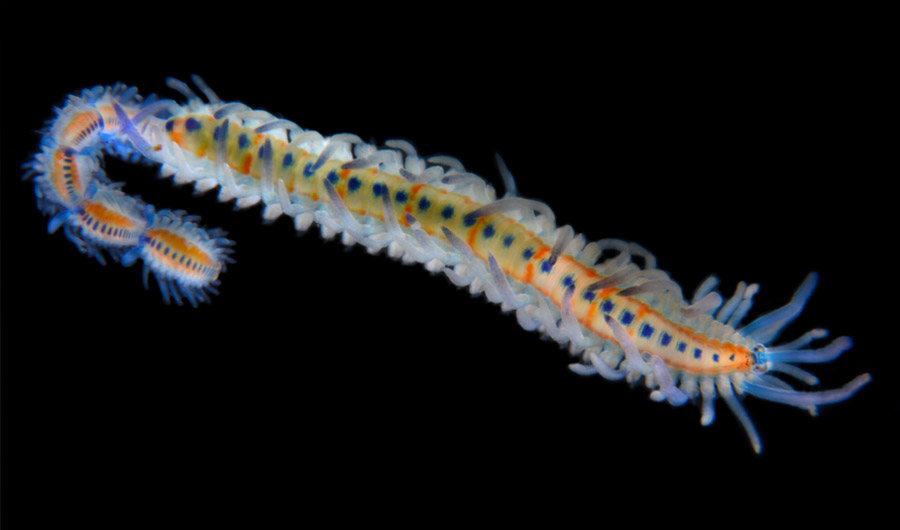 A few coastal creatures already have cult followings. Octopuses delight YouTube viewers with their squishable bodies and mastery of disguise, while mantis shrimp are famous for their psychedelic vision and ability to punch through aquarium glass. But coastal waters are full of lesser-known wonders as well. Here are a few prime examples, which we dedicate to every beachcomber who has ever stopped to wonder: "What the hell?"

Sea cucumbers regenerate their guts after puking them out

A researcher injects potassium chloride into a brown rock sea cucumber, prompting it to expel its own digestive tract.

"[Sea cucumbers] basically spit out their intestines, and they also lose their head in the process. And then they grow everything back," said Vladimir Mashanov, a developmental biologist at the University of North Florida in Jacksonville. Mashanov studies sea cucumbers' remarkable powers of regeneration, which he hopes could someday inspire advances in human medicine.

Found on seafloors worldwide, sea cucumbers resemble the inert vegetables they are named for. But they are actually animals related to starfish, with a mouth on one end, an anus on the other and a complex digestive tract taking up most of the space in between. Rather than keeping those guts safe inside, they have a habit of puking them up.

The gut-expelling process is precise, with organs breaking away at specific fracture points. Some species squirt their innards out the back end, while others puke them up through the front, along with their mouths and much of their nervous systems.

No one knows for sure why sea cucumbers expel their digestive tracts. Some think they do it to drive away predators, but Mashanov doubts this explanation, since the process ends with them sitting there helpless next to a pile of their own guts. Alternatively, the behavior may help sea cucumbers get rid of parasites, or it may help them survive lean times by reducing the amount of energy their bodies need.

Shark embryos devour their siblings in the womb 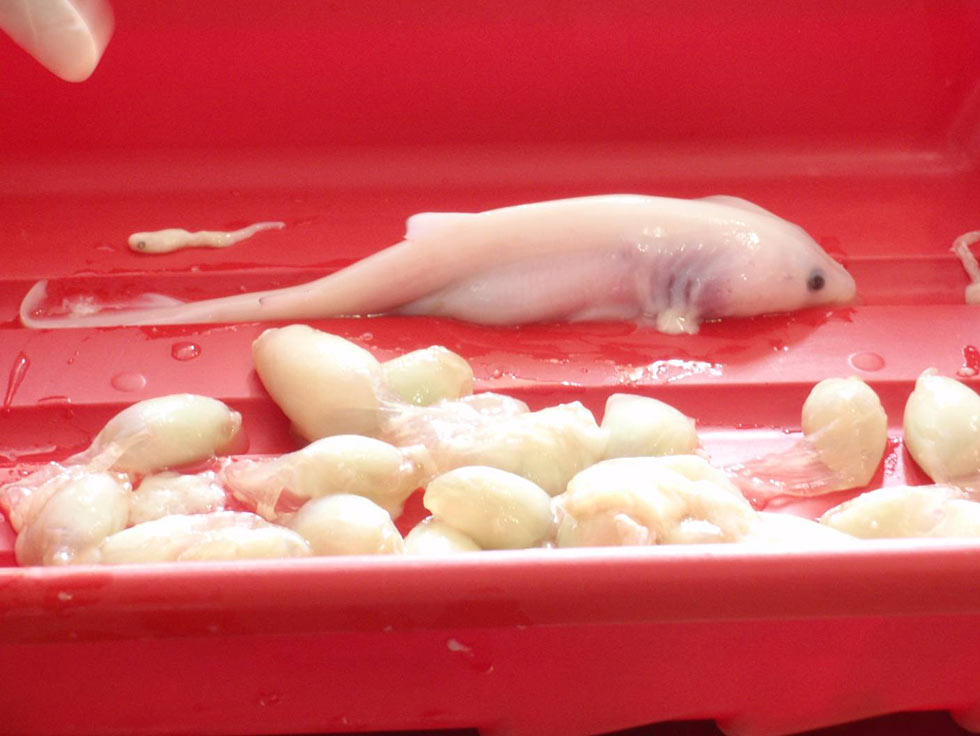 With their 10-foot-long bodies and triple rows of pointed teeth, adult sand tiger sharks look every inch the fearsome predator as they glide across reefs and sandy shorelines worldwide. But people may be surprised to learn that their embryos are fearsome too, attacking and devouring their siblings before they are even born.

During the early stages of pregnancy, each of the female shark's two uteruses contains numerous fertilized and unfertilized egg capsules. The embryos hatch within the womb, then spend a couple of months digesting their own yolk sacs. When they reach a length of about 4 inches, they begin eating everything in sight, including their hatched and unhatched brothers and sisters. By the time the mother gives birth, each uterus contains only one pup, which is already 3.5 feet long and capable of defending itself in the open ocean.

Starfish engulf prey with their stomachs 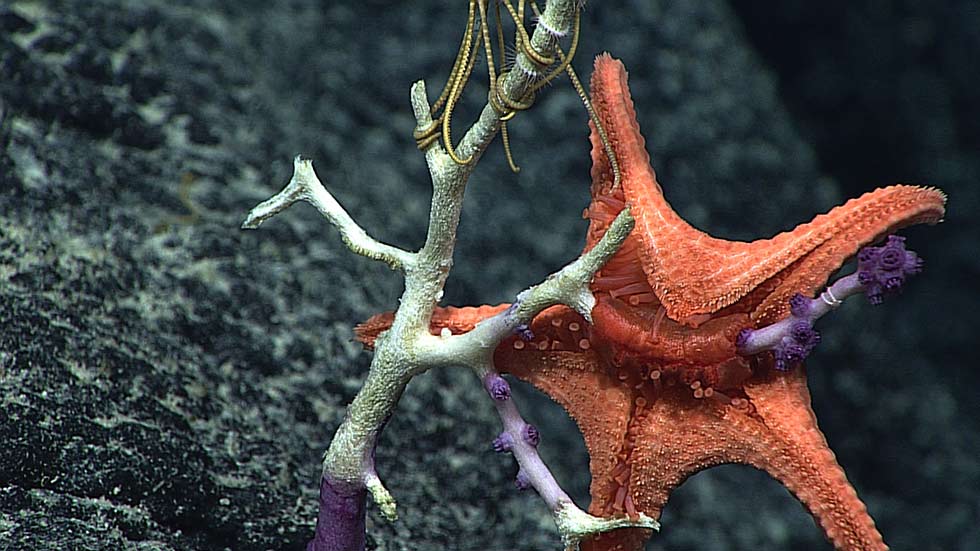 A sea star feeds on a coral colony in the Pacific Remote Islands Marine National Monument.

Starfish, also known as sea stars, are an iconic part of tranquil seaside landscapes. But beneath their bright upper surfaces, these echinoderms conceal feeding habits straight out of a horror movie. Rather than swallowing food like most animals, they push their stomachs out of their bodies to engulf prey. They then release enzymes to dissolve their prey into sludge, which they suck up before retracting their stomachs.

Starfishes' flexible, oozing stomachs are perfect for feeding on animals like clams and mussels. Such creatures rely on their shells for protection, but even when closed, those shells often have tiny gaps on one side. The gaps function as an exit route for filaments that attach the clam or mussel to the ground, but they can also serve as an entrance for starfish stomachs. A common Pacific starfish called the purple sea star can slip its stomach through cracks less than a quarter of a millimeter wide, digesting the soft animal inside even when it can't pry the shell open. 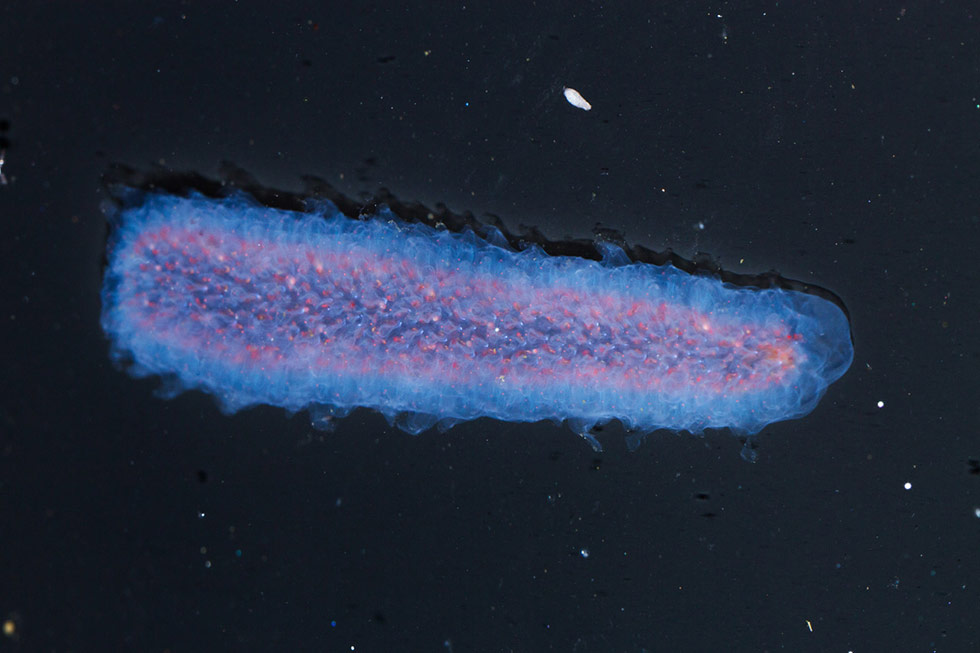 Pyrosomes look plenty weird even before you know what they are. They resemble luminescent wind socks adrift in the open ocean, and their length varies from less than an inch to more than 30 feet, with some reports of pyrosomes 60 feet long. Some marine biologists have even theorized that their confusing appearance may have helped launch the Vietnam War, causing American sailors to think they were being attacked by torpedoes.

These wormlike wonders are actually colonies, made up of thousands of tiny animals more similar to us than they are to squid or lobsters. The animals are tunicates, or sea squirts -- members of a group called chordates that also includes all vertebrates. While other adult tunicates live solitary lives stuck to the seafloor, those in pyrosomes live side-by-side in a tube-shaped gelatinous sheath, sucking in plankton through their outward-facing mouths and expelling wastewater into the middle of the tube. Since the tube is closed on one end, this feeding method lets them move around through gentle jet propulsion.

Pyrosomes are usually rare, but this year they have been washing ashore in huge numbers along the Pacific Northwest.

A pedicellaria head that has just been released by a collector sea urchin.

Sea urchins are best known for their long, stiff spines. But down between those spines, they have an even scarier weapon: biting, venomous organs called pedicellariae. While not all pedicellariae are adapted for defense, some are positively fearsome, with three fang-tipped lobes that open and close like flower petals.

Pedicellariae are normally set on top of flexible stalks, which bend this way and that in response to signals like light and touch. But the collector sea urchin, a species that lives in shallow waters in Hawaii, the Indo-Pacific region and the Red Sea, is capable of releasing its pedicellariae en masse when danger threatens. The pedicellariae then form a cloud of tiny defenders, all floating through the water with jaws splayed wide. They can snap shut to deliver a painful sting, so it's no wonder fish prefer to keep their distance after a collector sea urchin has let loose. 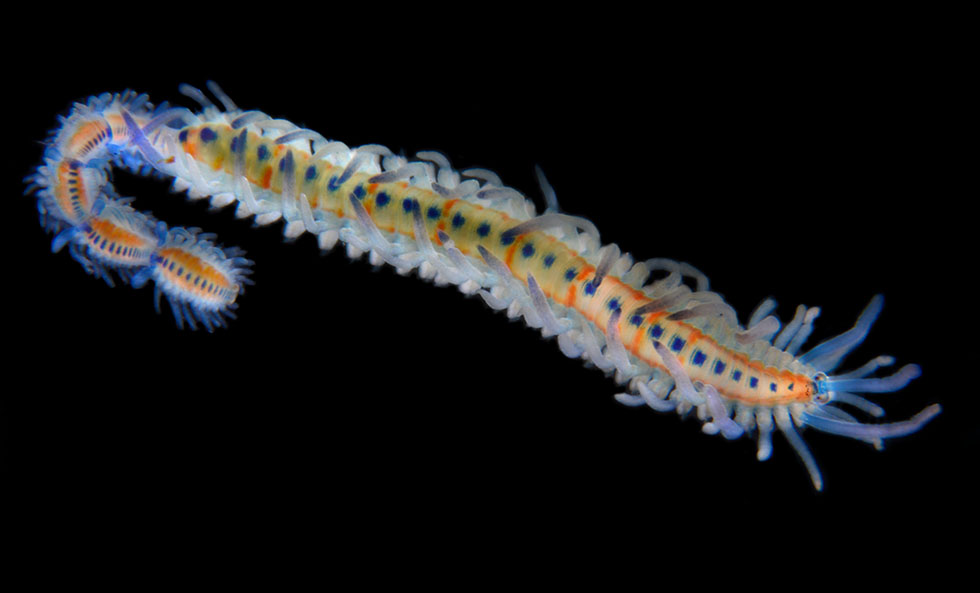 A Myrianida pachycera, a type of bristle worm, with a row of stolons on the rear end getting read to detach.

This photo may only be republished in conjunction with this Inside Science story.

Bristle worms, also known as polychaetes, are a diverse group of worms named for the bristles that sprout from their stubby limbs. These marine relatives of earthworms usually live on the seafloor, but they mate at the surface -- a problem that different species of polychaetes have solved in different ways. Some transform their crawling bodies into swimming forms for the journey to the top. But others detach their rear segments and send them off on their own. 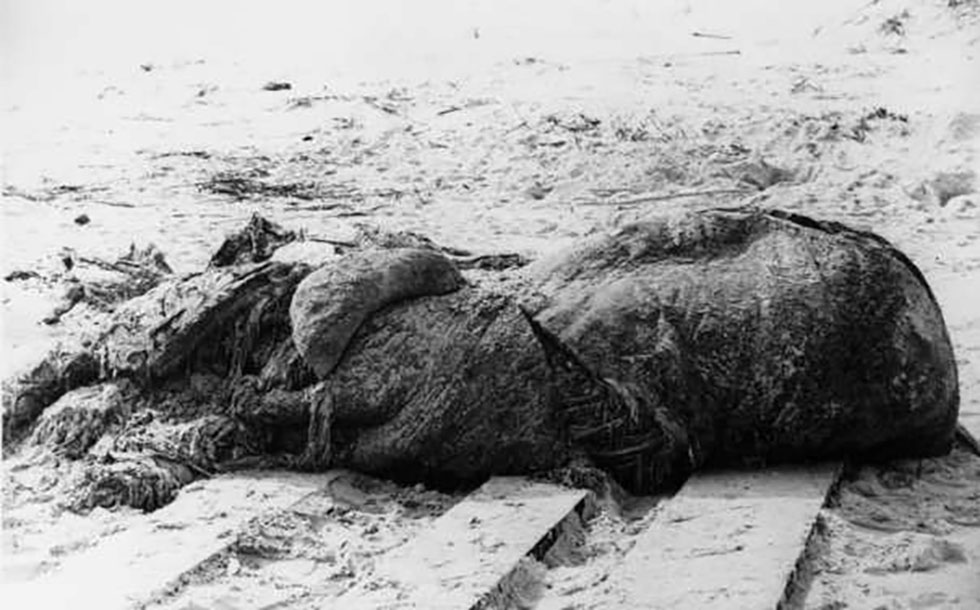 The St. Augustine "monster," a globster that washed up on a Florida beach in 1896.

Some seaside mysteries take decades -- and DNA evidence -- to solve. History is littered with huge, blobby things that have turned up on beaches around the world. These "sea monsters" have fascinated the public and scientists alike, inspiring fantastical names and origin stories.

For example, the "St. Augustine Monster," which washed up on a Florida beach in 1896, was originally identified as a colossal octopus far larger than any known species. Other famous specimens include the "Chilean Blob," two "Bermuda Blobs" and the "Tasmanian West Coast Monster."

In recent decades, scientific techniques such as DNA analysis and amino acid analysis have allowed researchers to finally figure out what they are: whale blubber. Evidently when whales rot, great slabs of their blubber can lift away intact and float through the ocean. The cellular tissue gradually decays, leaving an amorphous tangle of collagen fibers sure to stymie unsuspecting beachgoers.

Severe Marine Heat Waves Linked to Human-Caused Warming
Infographic: How a Geiger Counter Works
Tumors Under Physical Stress Inside the Body May Not Respond as Well to Chemotherapy
This Long-Tailed Bird Makes Sounds With Its Feathers in Different Accents
Jeweled Orb-Web Spiders Mimic Flowers to Catch Pollinating Insects
END_OF_DOCUMENT_TOKEN_TO_BE_REPLACED