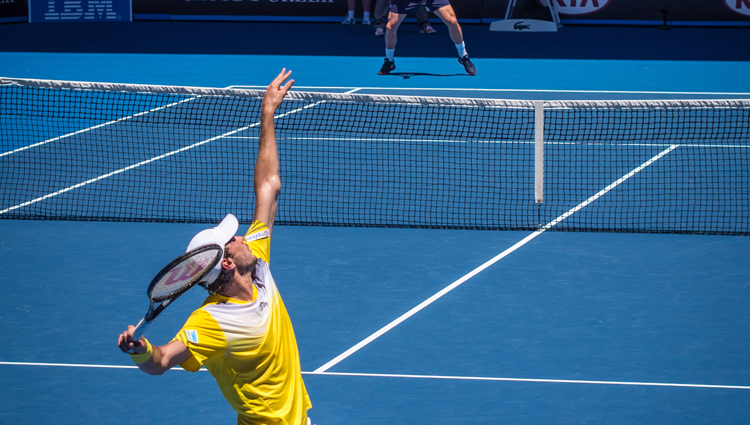 (Inside Science) -- Phil Flanagan has coached tennis for over 30 years, but some of today's top players do something he's never taught. Players slide on hard courts, which are made by covering an already hard surface such as concrete with a gritty mixture of paint and sand.

If that sounds a bit like sliding on sandpaper, it's not too far off.

"I find it to be one of the most amazing things I've ever seen on a tennis court," said Flanagan, who coaches in southern Florida.

Research into the factors that allow players to slide on both hard courts and clay courts has revealed surprising details about the technique, and may eventually help develop surfaces and shoes that can better accommodate sliding. Despite the possible benefit of increasing a player's ability to recover for an upcoming shot, some coaches and doctors consider sliding potentially dangerous.

Many casual fans might have missed this relatively recent development. Nonetheless, sliding is a part of the game at the highest levels, from players like current men's number-one-ranked Novak Djokovic (featured in video above), to now-retired, three-time U.S. Open women's singles champion Kim Clijsters. Many players will surely slide on the hard courts of the U.S. Open, which began this week in New York. Some people slide four or five feet, said Flanagan.

On clay courts, sliding has long been a crucial part of the game, most famously at the French Open. But even engineers are fascinated by the phenomenon of sliding on hard courts.

"It's actually very similar to an anti-slip surface," said James Clarke, an engineer who recently worked with a team at Sheffield University and Exeter University, both in the U.K., and the International Tennis Federation, to study the interaction between shoes and tennis court surfaces.

The group used a pneumatic rig to simulate the interaction between the shoe and the court, which allowed them to draw conclusions about what's actually happening when a shoe slides on a hard court surface that is, essentially, rough and unfriendly to sliding.

"For the most part, I think sliding on a hard court, unless somebody grew up with it, can result in injury. It's not for the recreational player for sure," said Dr. Alex Kor, a Maryland-based podiatrist and nationally ranked senior tennis player. "Unless you are very well adept at it, you are going to end up with an injury, an ankle sprain, an ankle fracture."

Kor and Flanagan agreed that before the last decade or so, they can't recall anyone sliding, at least not on purpose.

The advantage of the technique, said Kor, is that it helps players stop moving quickly as they hit the ball. They can move to the best position for the next shot coming their way.

A cross-step technique is the traditional method to recover from racing to one side of the court, said Flanagan. A player will push off from the outside foot, and bring it across the body to accelerate the return to a ready position, rather than shuffle back toward the center of the court.

The introduction of sliding to high-level tennis may be part of an overall intensification of the game in recent years, said Doug Eng, a tennis coach at Lesley University in Mass., and a member of the U.S. Tennis Association's sport science committee. He recently won an award from the U.S. Olympic Committee in recognition of his efforts using sports science.

Eng said there's been a noticeable increase in both how fast players are hitting the ball, and how much spin they apply to it. This makes it more difficult to return shots.

"Because the ball's moving faster and it sits up a little more than it used to, players are forced to move quicker to the positions on the court," said Eng. That change, he suspects, has encouraged players to resort to sliding, although he's not necessarily in favor of the practice.

"I think a lot of coaches cringe, because the forces on the body are much greater on hard courts and on the shoes," said Eng.

However, Clarke and his collaborators found that when players apply the force in the right way, and at the right contact angle, "then it's actually just as easy to slide, if you will, on the hard court as it is on the clay court," said Clarke.

When a player sprints across the court and then plants his foot, the shoe interacts very differently with the hard court surface than when the player accelerates from a standstill.

This means that under some conditions, the shoes are better at providing grip, and under others, better for sliding. Clarke said that balance comes down to the player being able to use different "athletic techniques" effectively within the game.

The research may eventually be applied to developing shoes optimized for all parts of the game, from quick sprints to slides.

Many talented young players slide often, said Flanagan, in an effort to emulate their favorite pros. Kor agreed, and cautioned against any recreational players who might consider experimenting with sliding on hard courts.

"I'm still just mystified as to how these tennis players are doing it at the [professional] level without getting injured," he said.